The high cost of building

MANY POST-COMMUNIST countries are architecturally scarred by state-sponsored engineering. The enormous concrete structures that have become synonymous with the Soviet regime were designed with pragmatics, not aesthetics, in mind. 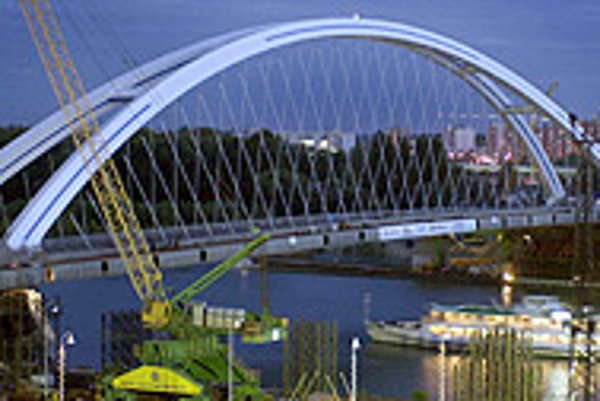 Font size:A-|A+0
MANY POST-COMMUNIST countries are architecturally scarred by state-sponsored engineering. The enormous concrete structures that have become synonymous with the Soviet regime were designed with pragmatics, not aesthetics, in mind.

But for every successfully completed project, such as the New Bridge and the Slovak Radio building in Slovakia, there are as many projects that foundered. Half-finished, these monuments to thwarted ambition give the impression of black holes sucking away millions of crowns from the state's coffers.

The prevailing trend is that large construction projects financed with public funds generally cost much more than the projected price. The new Slovak National Theater (SND) building, known as the "white elephant", was originally expected to cost 800 million Czechoslovak crowns (KČS) back when it was conceived in 1985. Twenty years later, the beast has consumed about Sk3.5 billion (€88 million) and the state is asking for Sk800 million (€20.1 million) more.

governments change and tackle new agenda items. Currently, opinions differ as to whether the state should sell the unfinished SND building to the highest bidder or allocate additional funds for its completion. If the government holds on, there are two questions: Where will the state find the money? How will theatres in other regions of the country be affected?

Another construction project to experience a financial shortfall crisis is the fifth bridge over the Danube River in Bratislava, Košická bridge. By the time the consortium of Doprastav and VA Tech Voest MCE GmbH & Co. Linz won the public tender to build the bridge, the project was already one year behind schedule.

When the consortium was accused of dumping (its offered price of Sk2.253 billion (€57.5 million) , excluding VAT, was 22 percent lower than the remaining short-listed bidders), the European Investment Bank stepped in. By promising to lend Slovakia €45 million, or 50 percent of the projected cost of the bridge, it earned the right to assess the construction company. In September 2002, the European Investment Bank confirmed Doprastav and VA Tech Voest MCE GmbH & Co. Linz as the winner of the tender. Ever since, people have criticized the deal for its lack of transparency.

Košická bridge construction started in February 2003, two years behind schedule. Now that 90 percent of the construction is complete, project managers are calling for the state to pour in an additional Sk402 million (€10.1 million), despite the fact that the Finance Ministry has already covered VAT increases from 10 to 19 percent to the tune of Sk279 million (€7 million).

The project's investor, Metro company, in which Bratislava holds the majority 66 percent, claims that the request for additional funds is in line with the original contract. According to Metro, the contract requires that it receives the price of the initial tender, plus VAT, plus the difference between the 1999 estimated price and the real price of the job.

Another protracted civil engineering project is the Sitiny tunnel in Bratislava. This forms part of the D2 highway from the Czech Republic to Hungary, bypassing the Slovak capital. This time, unforeseen geological conditions are resulting in delays and price increases.

The tunnel was supposed to cost the state Sk1.131 billion (€28.4 million) excluding VAT. In March, with the tunnel still far from completion, the National Highway Company had already invested Sk1.271 billion (€31.9 million), according to Hospodárske noviny. While a thorough examination of the tunnel site could have helped the investor better estimate the costs, it would have meant a Sk500 million (€1.1 million) investment in addition to delays. In the end, making a thorough examination is often more expensive than potential overages.

Highway construction projects win the contest for being consistently delayed and over budget. The Finance Ministry has admitted that highway construction costs in Slovakia are high compared to international levels. The Construction and Regional Development Ministry plans to allocate Sk18.2 billion (€458 million) toward highway and dual-carriage road construction in 2005 - a significant increase compared to the previous year.

In an effort to reduce the financial surprises that highway construction has historically brought, the Finance Ministry is encouraging foreign construction companies to compete for bids. A change in negotiation with suppliers could also be beneficial.

"An analysis of the so-far development has showed that prices were often artificially elevated via amplifying of costs and prices," said Finance Minister spokesperson Peter Papanek. Other reasons that Slovakia's highway projects are high is their generous designs, allowing multiple entry and exit points, and the demands made by municipalities when a project runs through their region.

How the state manages to balance the budget, given its knack for underestimating costs, will be born out in the future. In the meantime, the other "problem" areas to consider are:

Branisko tunnel - Originally estimated to cost Sk5.64 billion (€141 million), expenses mounted to Sk7.6 billion (€194 million) before completion. Construction was delayed 3.5 years, and there is a suspicion that public funds were funnelled to other sources during its construction.

Rázsochy hospital - During the Communist regime, this amounted to a generous project for a hospital. Nowadays the Health Ministry is trying to sell the shell of the building for Sk1.3 billion (€33 million).