Bratislava pounds itself into shape

SLOVAKS are used to hearing criticism about their heavy, meat-based dishes. People express outrage at the zabíjačka (pig killing) tradition and the surfeit of greasy fry-ups that comprise the typical Slovak's "diet". 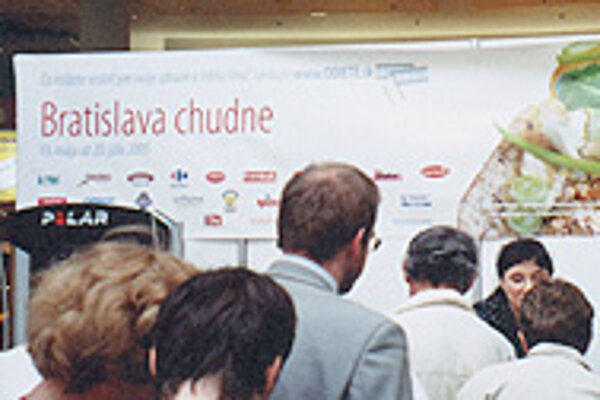 Font size:A-|A+0
SLOVAKS are used to hearing criticism about their heavy, meat-based dishes. People express outrage at the zabíjačka (pig killing) tradition and the surfeit of greasy fry-ups that comprise the typical Slovak's "diet".

Add the current trend of a sedentary lifestyle in which watching TV or playing computer games are considered "leisure activities" and you see the critics' point - people's health is in danger.

Unfortunately, Slovaks have been caught by the world trend towards obesity - they are overweight and have associated health problems. But now an initiative in Bratislava sets out to get people to take control of their health through eating less and taking up exercise.

The Bratislava Slims Down campaign seeks to imitate similar initiatives in other European cities on promoting a healthy lifestyle - with some leeway for local tastes. The campaign runs over nine weeks, from May 13 to July 20 at the Polus City Center, and members of the public can pick up advice on getting in shape.

"The campaign aims to attract the public at large, to which campaigns of the 'look good in a swimsuit' type have not appealed. It wants to point out that obesity is a disease with serious consequences and not an aesthetic problem, and to show those who gave up any hope of losing weight that there is a real possibility of reverting this state," said Denisa Priadková from the PR 2002 agency, which is behind the initiative.

The times when obesity was viewed primarily as a problem of the West are gone. Experts see obesity rising throughout all Europe at a disturbing pace, forming a "pan-European epidemic that presents a major barrier to the prevention of chronic non-communicable diseases".

The International Obesity TaskForce document research produced in 2002 estimated that 135 million citizens in the old EU member states are affected by the "epidemic". Seventy million of those were estimated to live in the candidate countries, including Slovakia. Over the last decade, obesity grew by 10 to 40 percent in the majority of the European countries.

Obesity is the cause of many health problems, quite apart from not looking good. Major health consequences include hypertension, type two diabetes, cardiovascular diseases, cancer and psychosocial problems, increasing risks of asthma, osteo-arthritis and impaired fertility. The costs for curing obesity in Europe reach up to 8 percent of overall health budgets, which equals the money spent on cancer treatment.

There are almost 2 million people fighting weight problems in Slovakia, statistics from the Main Hygienic Office (which works under the Public Health office) show. That is one third of the nation, 60 percent of whom are adults.

Since the health aspect is what the Bratislava Slims Down organizers are really interested in combating, they have called on doctors to help people change their lifestyles. Those who take part are encouraged to lose between five and 10 percent of their weight over the course of the campaign, a step which if sustained over the long term could lower the death rate by 20 percent.

The Bratislava civic association, Bocian (Stark), which helps infertile women, suggested the health-aspect idea to the organizers. Being overweight is a contributing factor for women undergoing fertility treatment. The fat absorbs the medicine's chemicals and the therapy fails.

Everyone from around the country, including non-Slovaks, is encouraged to participate in Bratislava Slims Down.

"Bratislava has the largest number of experts dealing with obesity treatment, but their skills have never been interlinked," Priadková said, explaining the reason why Bratislava was chosen for the campaign. The initiative attempts to motivate these experts to cooperate, as they do in other countries, rather than compete.

If you are too busy playing computer games to catch the event this year, do not worry. The organizers plan to keep reducing Bratislavans' weight annually, gaining in experience and effectiveness each year.