THE RICH history of Modrý Kameň castle contains a chapter that might excite visitors when looking out from the castle ramparts at the surrounding mountain scenery. The story is one concerning the attack by the conquering Turks. 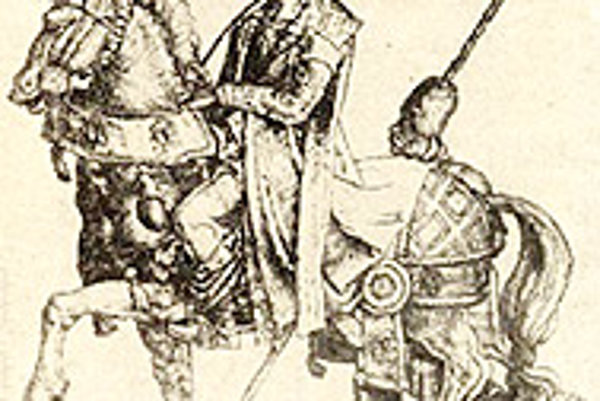 Font size:A-|A+0
THE RICH history of Modrý Kameň castle contains a chapter that might excite visitors when looking out from the castle ramparts at the surrounding mountain scenery. The story is one concerning the attack by the conquering Turks.

The Turks first tried take the castle by using deceit. This is how Mikuláš Istvánffy documented the event (in Latin):

"The Turks have caused considerable damage in Hungary and Croatia. Despite reaching an armistice they started new attacks. Modrý Kameň castle was in the hands of Ján Balaša. He managed to capture some Turks in senior positions and hold them as hostages. Balaša also flung the governor of the castle, Benedikt Pintér, in with the imprisoned Turks, accusing him of embezzlement and forging documents.

"In the jail, Pintér lamented the cruel behaviour of Balaša in front of the Turks. He plotted with them to trick Balaša. They would get one or more of them released and in return go to the Budín landlord, Mustafa, and get him to send other hostages in their place. But they were to secretly arrange with Mustafa to send his soldiers to the castle on a particular day. Using ropes, they should enter the castle through a place Pintér would show them, then kill Balaša and usurp the castle.

"Little did the Turks know that Balaša knew about the plan because he had hatched it with Pintér beforehand. On the specified day, Turkish infantry from Fiľakovo, Novohrad and Budín [Buda - the capital of the Hungarian monarchy] secretly approached the castle. Pintér let four or five of them enter the castle and then tied them up. The others, hiding under the castle walls, sensed the deceit, as they got no response from their accomplices to an arranged signal. Cursing Balaša they retreated from Modrý Kameň.

"Mustafa decided to take revenge on Balaša for his deception and drive him from the castle. He gathered an army and appointed Ali of Stoličný Belehrad to command it. Ali, known as Black according to legend, was ordered to hurry to exact revenge. Balaša named Imrich Temessy [Pribeg], a reliable captain of his cavalry, as commander of the castle garrison, prepared to repel the siege.

"Ali of Stoličný Belehrad started to attack by firing four cannons at the castle. The commander and the garrison defended with courage, but the weak walls could not resist the cannon blasts. Defenders sent messengers to Balaša. He repeatedly asked Archduke Karol to send reinforcements to the castle in order to help repel the Turks. Karol anxiously told Šimon Forgáč, commander of forces along the Danube to help the garrison's defenders.

"Standby units led by Forgáč gathered in Vígľaš, near Zvolen, formed a military camp of 10,000 armed men. Balaša wanted to attack the enemy before his soldiers weakened, even offering to fight in the front line himself.

"Meanwhile, the Turks attacked the part of the walls they had destroyed with cannons. They created expansive lines, however, they were turned back with the last strain of defending power. Many died or suffered injuries, including the defenders. They knew they would not sustain another attack, that's why they kept sending messengers asking Balaša and other commanders for help.

"When everything turned out to be useless, they left the castle in desperation and decided to go to Divín - a castle that also belonged to Balaša. In the silence of the night they left Modrý Kameň and crossed the forest to get to Divín. The enemy annexed the empty castle, but at the same time, he moved with his camp to Divín and besieged it as well."

Divín castle was another part of the fortified defence system along the Danube that suffered the same fate as Modrý Kameň. The Modrý Kameň area bears many traces of the Turkish invasions in the names of local villages - Bašovka, Katovka and nicknames such as Ťurek. Secret corridors lead from the castle to all four cardinal points. The many chestnut trees in the area, now in full blossom, are also a memory to the Turks.