IT'S easy to forget how great certain actors are. Only a handful of performers seemingly snatch up all the flashy leads - leaving all the rest to wallow in near or relative obscurity. 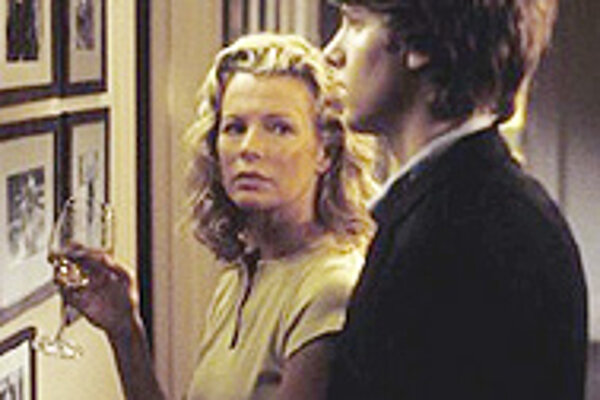 The Door in the Floor

IT'S easy to forget how great certain actors are. Only a handful of performers seemingly snatch up all the flashy leads - leaving all the rest to wallow in near or relative obscurity.

Jeff Bridges is by no means an obscure, uncelebrated actor; to the contrary, over the past 30 years he has consistently starred in popular and acclaimed movies and raked in four Academy Award nominations. Yet, he frequently seems overshadowed by his moneymaking colleagues. Fortunately, Bridges has quietly soldiered on, repeatedly churning out one fantastic performance after another. The Door in the Floor contains the latest of these performances.

Adapted from John Irving's novel A Widow for One Year and directed by Tod Williams (The Adventures of Sebastian Cole), the film stars Bridges as Ted Cole, a writer (and occasional illustrator) of novels and children's books. Ted is distinctly middle-aged: confident, jaded, and very carefully cultivated. When describing his profession, he does not say he is a writer, but instead delivers an intentionally modest mantra that he must have spent the better part of his career refining: "I am an entertainer of children, and I like to draw."

Ted lumbers through the movie - sometimes nude, other times wearing only a robe, almost always with a drink in hand - like a man of habit who has fully accepted himself and decided that other people's opinions are irrelevant. He loves to play squash in his converted barn, he insists upon typing all his work on an old-fashioned typewriter, and he enjoys drawing nudes of (and most likely bedding) local women.

This last habit is problematic because Ted is married. When The Door in the Floor begins, however, this marriage is slowly crumbling. In their first scene together, Ted walks over to his wife, Marion, who is sitting on the lawn of their home in picturesque and melancholy East Hampton, New York. He brings her a blanket, explains how he'd like to build a swimming pool and construct an athletic field in their backyard, shows her a photograph of the assistant he'll soon be hiring, and casually mentions that he'd like them to separate for the summer. When she doesn't respond, he silently walks away and goes about his business.

This sort of nonchalant lack of communication has clearly become the norm in their marriage. Since the death of their sons Thomas and Timothy, Ted and Marion have drifted apart; Marion has become practically catatonic - certainly no source of love or comfort to Ted or their young daughter Ruth (Elle Fanning). But upon the arrival of Ted's new assistant, an aspiring young writer named Eddie (Jon Foster), Marion begins to awaken. She finds a companion, an admirer, and a lover.

Though this May-December romance technically provides the majority of plot development, the movie as a whole belongs to Jeff Bridges' Ted. This is fortunate, as Bridges takes over every scene he is in. His large, ambling frame constantly fills the screen, effectively drawing attention away from any other actor. In the hands of a lesser performer, Ted may have been all arrogance and malignance; Bridges makes him a flawed, but fully rounded sympathetic character - warts and all.

Basinger and Foster are adequate, but not particularly extraordinary. Basinger's spacey stares may work for her character's advanced detachment, but it often feels like there is nothing lurking behind them. Compared to the sections of the film that focus on Ted, the Marion/Eddie storyline feels practically incidental - if necessary for advancing the plot.

Bridges' performance and Williams' tastefully subdued direction and script easily make up for these faults, however - making for a perfect accompaniment to the quiet, gray coastal setting.