THOSE who spray paint on public and private surfaces without the property owner's consent will be prosecuted as criminals, according to new legislation signed into law by President Ivan Gašparovič. 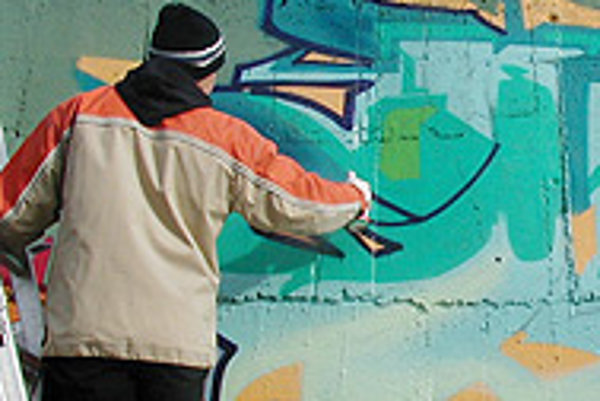 Font size:A-|A+0
THOSE who spray paint on public and private surfaces without the property owner's consent will be prosecuted as criminals, according to new legislation signed into law by President Ivan Gašparovič.

Under the law, which takes effect July 1, first offenders can face up to one year in prison or be held financially responsible for damages. Repeat offenders face stricter punishment: up to three years in prison, plus damages.

The original draft legislation against graffiti, first passed by parliament in March of this year, was vetoed by Gašparovič, who felt the punishments were not severe enough. Deputies then reworked the bill and introduced a clause turning graffiti into a crime. After parliament passed the legislation in its revised form on May 10, Gašparovič approved it as law.

Law enforcement officers have been trying to tackle Slovakia's graffiti problem for years, with little success. According to them, punishments were too light to dissuade sprayers from marking public and private property.

"The police force welcomes the stricter law that turns graffiti into a criminal offence. Until now, [graffiti spraying] wasn't a criminal act, so motions filed by owners of damaged property were not dealt with accordingly," Vladimír Gemela, a spokesperson at police headquarters, told The Slovak Spectator.

Catching and charging vandals is difficult. Police rely on witness testimonials and evidence found during house searches, such as spray cans or traces of paint on the hands of the accused.

Formerly, if the police managed to catch and charge an offender, the punishments allowed sprayers to return immediately to the streets, where they would spray the walls again.

No statistics are currently available on the estimated number of sprayers in Slovakia. Changing graffiti into a criminal offence gives police reason to keep detailed records, which will likely lead to a better understanding of who initiates the crime.

Graffiti is widespread throughout Slovakia, with some towns registering more damage than others. Trnava, for example, estimates its graffiti damage as costing more than Sk80 million (€2.05 million). Not even surveillance cameras helped curb Trnava's incidence rate.

Marián Blaho from the magistrate's office in Bratislava knows more about graffiti than most. His department is responsible for maintaining the city's public roads and bridges, which are prime targets for vandals.

Blaho told The Slovak Spectator that the latest project to remove graffiti from one side of Nový Most (the New Bridge) will cost tax payers Sk3.7 million (€95,000). The project involves painting the bridge's walls (3,700 square metres worth) with a protective coating that enables city officials to remove graffiti more easily and cost effectively.

Like other law enforcement agents, Blaho welcomes the amended law but he is pessimistic. "I already heard from some graffiti 'artists' that stricter punishments increase the danger and would provide an even greater adrenalin rush."

Bratislava officials are looking for a positive way to curtail vandals. They are currently discussing setting aside certain walls and areas of town as graffiti zones.

Augustín Šuta, the head teacher at a local high school in Bratislava, described how his school solved their school's graffiti problem.

According to Nový Ćas, Šuta said that teachers and students organised a graffiti weekend party. In addition to food, music and dancing, graffiti artists sprayed the school with their designs. The idea was to dissuade students from vandalizing the school out of respect for their friends' artwork.