YOUNG Iranian signer Arash is taking the world by storm with his upbeat song Boro Boro. The single, released in September of last year in Sweden, has climbed the charts to number one in virtually every country it gets radio play. 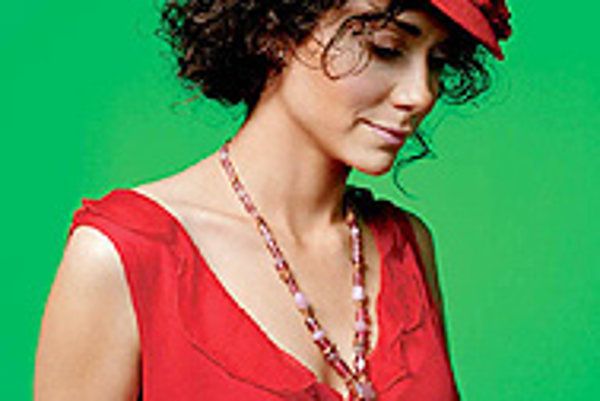 Font size:A-|A+0
YOUNG Iranian signer Arash is taking the world by storm with his upbeat song Boro Boro. The single, released in September of last year in Sweden, has climbed the charts to number one in virtually every country it gets radio play. From Northern Europe, his joyful dance music has slowly crept both East and West, catching the interest of ordinary listeners and musicians alike. Slovak singer Lucia Šoralová is no exception to the Arash craze. In her second album Púšť (Desert), which is due in music stores around the country, she features in a duet recorded with the Teheran native.

AT 154 centimetres tall, Lucia Šoralová often arouses a maternal instinct in others. "I am no longer shocked when my colleagues lift me up in the air and simply put me down somewhere else," says the tiny Slovak singer, laughing.

Famous in Prague where she alternates with Czech stars Lucie Bílá and Bára Basiková in popular musicals, Lucia now has another claim to fame: a recorded duet with Arash, the rapidly rising Iranian star who topped the local pop charts with his single, Boro Boro.

The duet, Man O To, appears for the first time on Lucia's latest CD entitled Púšť (Desert). On the album, the 28-year-old Lucia sings in Slovak, Czech and Spanish. She wrote the lyrics to five songs on the album, and the music to four. According to Lucia, the CD is about communication. "I talk about what hurts me, what hits me to the ground, what comforts me. It's like my diary," she told The Slovak Spectator on a recent visit to Slovakia.

The Slovak Spectator (TSS): Your second album, the ethno-pop Púšť, seems to target a wider audience compared to your chanson debut, Zblízka (From Near). Did you grow tired of appealing to a minority listener?

Lucia Šoralová (LŠ):Not at all. Only I grew weary of communicating one way - in monologues. I got fed up with blurting out my deep inner self and facing quiet on the other side, no reactions. What I aim for now is to

TSS: To what extent do you succeed?

LŠ: I try to be direct, not talking in twists and turns. Moreover, the music is happier as I am happier. I don't feel a need to hide anymore.

TSS: What is behind this change?

LŠ:Maybe it's because I moved [away from Slovakia]. Prague seems to be more open, with more positive energy.

TSS: Your duet with Arash will be released just as Slovaks are growing familiar with his name, but you met him months ago. How did you get to know him?

LŠ: It's impossible to get to know a person in few hours. But during our meeting in Sweden, I was surprised to find a boy with gentle features and melancholy eyes, compared to the rough man presented by the media. His physical appearance struck me first, then his gentle gestures and cultivated performance. He is a very nice, pleasant and open person, with no celebrity-like manners.

LŠ: Great. I can say it was better for me than singing in Slovak. I don't know why. I even like singing in Czech more than in Slovak, though Slovak is believed to be more melodic. For instance, I don't like singing in English, despite everyone who says English is the best language to sing in. I can't explain it. Also Spanish, which I just started to study, is closer to me. It's more natural for me to sing in Spanish than Slovak, and I felt the same when I sang in Persian.

TSS: Slovaks can hear Arash on your CD. Will Iranian or Swedish listeners get a chance to hear you?

LŠ: So far, no. But negotiations are going on to include the duet on additionally issued copies of the Arash's CD.

TSS: Arash has made an impact on Slovak radio listeners. Do you feel that by recording a duet with him, some of that glory passes onto you?

LŠ: Arash's music is dance music. It's more about happiness than communication. In my case, communicating a message to a listener is primary. For that reason, I think my songs will never be number one radio hits - but one never knows... They are not designed to catch immediate attention. Connection with Arash will certainly capture the public's interest, though.

TSS: You and Arash are both lyricists. Did you talk about your craft?

LŠ: Arash never writes when he is sad or unhappy. Me, on the other hand, I could have written lyrics for an entire album in such a state. But he closes inside, savouring the depression. And as soon as he gets happy, he happily shouts Boro Boro! When I am happy, I enjoy it. Even my happy, positive songs contemplate on awaking from a kind of troubling, negative situation. I talk about what hurts me, what hits me to the ground, but compared to my debut album I elaborate on what it taught me.

TSS: But Arash's Boro Boro is not happy. It's about leaving a beloved...

LŠ: Well, yes. But he writes it when he is free, when the situation is over, everything is solved and the result is fully positive. If I had a problem in a relationship, my song would reflect on those heavy feelings.

TSS: You always try to communicate something through your songs. What is it you want to pass on with Arash's duet?

LŠ: It was just a union with a musician who grasps music and melody similarly to the way I do. The way I unite with somebody is a kind of gesture for breaking borders. It's the same, as I don't like a CD to be recorded in one genre. I also don't like singing in only one language. Basically, I don't like to be limited, but we create the borders ourselves. If there were none, everything would be different.