THE LAST noble owner of Bojnice estate, Count Ján František Pálffy, started renovating the castle in 1889. The source of Pálffy's inspiration were the chateaus on the river Loire - Pierrefonds, Amboise, Carcassonne or Perpignan, the Pope's palace in Avignon, Gothic castles in Tyrol - Merano and Kreuzenstein - as well as early Renaissance Italian architecture. 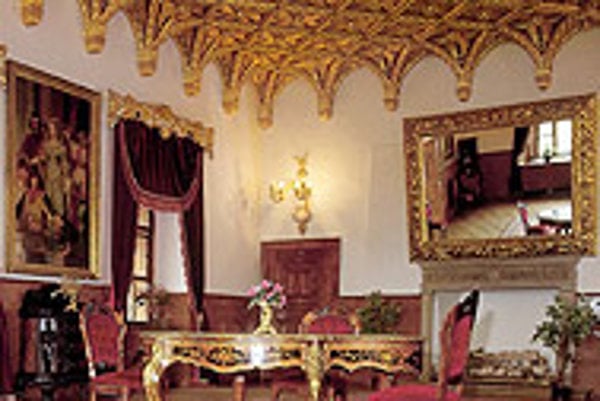 Font size:A-|A+0
THE LAST noble owner of Bojnice estate, Count Ján František Pálffy, started renovating the castle in 1889. The source of Pálffy's inspiration were the chateaus on the river Loire - Pierrefonds, Amboise, Carcassonne or Perpignan, the Pope's palace in Avignon, Gothic castles in Tyrol - Merano and Kreuzenstein - as well as early Renaissance Italian architecture. Often the count himself supplied the architects with models, drawings and photographs.

Theoretically, the renovation was based on the works by architect Eugene Emanuel Viollet le Duce, the author of several French Gothic chateaus in the first half of the 19th century. Pálffy delegated Jozef Hubert, an architect from Bratislava, to carry out his French vision.

A traveller, Pálffy had cultivated his feeling for art even more than architecture. Gebrüder Colli - Atelier für Kunst und Gewerbe Industrie, a company from Innsbruck, was delegated to carry out the artistic interior works.

One of the last steps of the reconstruction was the golden ceiling in the Golden Hall. Count Pálffy ordered a copy of the ceiling from the Academie di Belle Arti in Venice from the Colli company on August 24, 1907. Though he constantly tried to speed up the building process, he died on June 2, 1908. The workers from Colli finished the installation several months later, in February 1909.

The Golden Hall, named for the ceiling, which is carved from pinewood and covered with gold foil, is the most beautiful room in the castle. The ceiling consists of neo-Renaissance flooring plates. Their edges are decorated with leaf ornaments, with a rosette placed on the joints of the plates. By the walls, the plates continue into arches and touch the consoles. A winged head of a small angel is in the centre of each plate: 183 angels watch the visitors from above.

During the renovation of the ceiling in February 2001, an inscription on the reverse side of a small angel's head was discovered which reads: 15 II Geb. Colli Co. Innsbruck Jozef Dimai aus Innsbruck Tirol. For years there had been Count Pálffy's portrait in the centre of the ceiling, which had been placed there by the executor of his last will Emil Koderle, because the shield with the angel still had not been finished. The ceiling got its final shape first in February 2001 when Palffy's portrait was substituted for the shield with the angel and Pálffy's coat of arms. The portrait was then restored and placed separately.

Visitors to Bojnice can enjoy the Golden Hall on regular tours.