SLOVAK officials gave mixed reactions to the French rejection of the EU Constitutional Treaty in a May 29 referendum. While some said the ratification process could continue, others said that the resounding French "Non" signaled the death knell for the document. 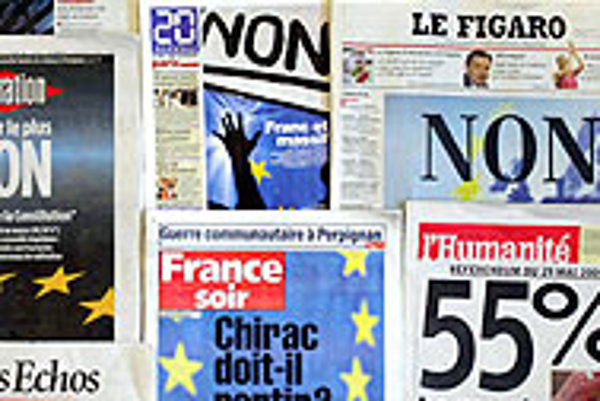 Font size:A-|A+0
SLOVAK officials gave mixed reactions to the French rejection of the EU Constitutional Treaty in a May 29 referendum. While some said the ratification process could continue, others said that the resounding French "Non" signaled the death knell for the document.

According to Slovak Speaker of Parliament Pavol Hrušovský, the whole ratification process should be halted because of the French referendum results.

"The EU must start working on a new document," he said at a press conference on May 30.

Hrušovský, who is also the chairman of the conservative Christian Democratic Movement (KDH), and whose party opposed Slovakia's ratification of the EU constitution, said "on Sunday, free Europe won".

He argued that the vote proved the conception of the whole document was based not on the needs of EU citizens but on those of "some European politicians".

Unlike Hrušovský, however, Slovak President Ivan Gašparovič said he did not think the results would stop the ratification process. He did admit however, that the vote would complicate the operation of the EU.

"I think we should consider whether everything in the EU is working as it should be in terms of accepting the opinions of others, the future functioning of the national parliaments, as well as the issue of equality of the union's partners," Gašparovič said.

According to several insiders the French vote could result in a "domino effect", making more countries likely to vote against the constitution.

"A major argument for supporting the constitution is a fear of isolation if the referendum turns out bad only in one member state. This fear, however, will no longer be a factor for the citizens of The Netherlands, Great Britain and so on. A domino effect of failed referendums may follow, " Peter Zsapka, analyst at the Center for European Policy (CEP), based in Bratislava, told The Slovak Spectator.

Slovakia's European Commissioner Ján Figeľ voiced similar concerns. "The French decision is autonomous on one hand, but on the other it may act as a signal to Dutch voters," he said.

The Dutch referendum was held on June 1 and voters rejected the constitution in even larger numbers than the French.

According to unofficial results from the morning of June 2, more than 60 percent of Dutch voters were against the document.

Although the Dutch referendum was only consultative and not legally binding, Dutch politicians are expected to respect public opinion.

Observers suggested that the overwhelming rejection by the Dutch signals the end of the proposed constitution.

Prior to the Dutch vote, but after the French, Commissioner Figeľ said he did not think that the rejection of the treaty was a threat to the future expansion of the EU.

In an official statement issued on May 30, Slovak PM Mikuláš Dzurinda expressed his disappointment with the outcome of the vote in France, which "has for decades been one of the motors of European cooperation".

The PM also stated that EU integration and cooperation would not end.

"In the past the EU has shown that the political will to cooperate is stronger than the challenges they [EU members] face," the PM's statement read.

"It is therefore necessary that the ratification of the European Constitutional Treaty continues and be completed in each EU member state."

However, instead of having a referendum, Slovakia voted the document through in parliament. This was despite some political parties, including the ruling KDH, being in favour of a referendum. In the May 11 vote in Slovakia, 116 of the 150-strong parliament supported the EU Constitutional Treaty. The KDH, the Slovak Communist Party (KSS), and three independent MPs voted against ratification and four MPs abstained from voting.

Explaining his party's position, KDH chairman Hrušovský said, "a lack of democracy threatens Europe, and the smaller countries will be weakened in favour of the larger ones."

Vladimír Bilčík, head researcher with the Slovak Foreign Policy Association (SFPA) said that the French rejection brings an end to the EU Constitutional Treaty in its current form.

Bilčík said that it is now also clear that the document will not take effect at the end of 2006 as originally planned because the condition for that was the ratification of the document by all EU member states.

"In order to save at least a part of the document a political solution will have to be sought," Bilčík told the TASR news agency, adding that a more realistic solution would be to introduce some of the changes enshrined in the document through agreements between member states.

"It is unclear, however, how the leaders of other member states want to motivate their voters because the French rejection puts a major question mark over the practical meaning of every coming referendum," he said.

While the rest of Europe wondered over the consequences of the French "Non", there were also voices in Slovakia that welcomed the French vote.

"The union lives on, just without the constitution," SNS chairman Ján Slota said in a May 30 statement.

According to the SNS, France demonstrated its autonomy by voting no.

Fear of immigrants and disapproval of Turkey's possible accession into the EU was also echoed in the SNS statement.

"The French confirmed that they are true patriots and Europeans at the same time. The SNS appreciates that the French also voted against the creation of a non-European Europe and refused to support the massive influx of immigrants from other parts of the world," stated Slota.

But according to Jirko Malchárek of the ruling New Citizen's Alliance party, Slovaks as well as other Europeans are disappointed with the French vote.

"Because of this vote we will have to suffer the functioning of the EU institutions according to the old laws," said Malchárek.