IN THE MIDDLE of another series of conflicts between ruling partners the Christian Democratic Movement (KDH) and the New Citizen's Alliance (ANO), the latter faced the departure of one of its MPs. 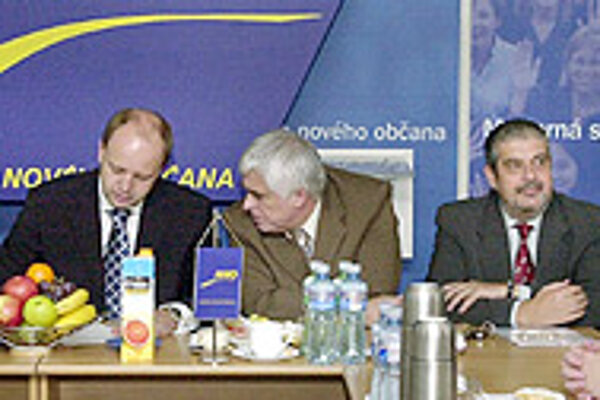 Font size:A-|A+0
IN THE MIDDLE of another series of conflicts between ruling partners the Christian Democratic Movement (KDH) and the New Citizen's Alliance (ANO), the latter faced the departure of one of its MPs.

ANO MP Ján Drgonec announced on May 30 that he was leaving the party, thus becoming the fifth MP that the ANO has lost during this election term.

ANO said the departure of Drgonec would not have any impact on the party, which now has only 11 MPs. Fellow ruling partners the Slovak Democratic and Christian Union (SDKÚ) and the Hungarian Coalition Party (SMK) recently signaled that a conflict between the liberals and the conservatives would not result in any cabinet shifts or early elections, as some had suggested earlier.

Drgonec's departure did deal yet another blow, though, to the minority coalition led by PM Mikuláš Dzurinda, which now only controls 69 of the 150 MPs in parliament.

Drgonec said he had considered leaving the ANO a year ago and that his current decision came after he realized that ANO chairman Pavol Rusko was, "unable to tell the difference between leading a company and leading a country."

Some former ANO MPs presented similar reasons for their departure. Out of the original 15 ANO members, former Economy Minister Robert Nemcsics, former Deputy Transport Minister Branislav Opaterný and MPs Anton Danko and Jozef Banáš have left the party, with Opaterný going so far as to compare Rusko's ways to those of Stalin.

ANO's response has been to accuse Drgonec, a lawyer by profession and a former judge with the Constitutional Court, the country's supreme legal authority, of leaving due to "unsatisfied economic interests."

"Ján Drgonec wanted to serve as legal counsel for [oil transportation company] Transpetrol and demanded his wife be granted the rights for a host organization for the European consumer centre," ANO spokesman Juraj Puchý said in an official statement on May 30.

According to Puchý "any demands of this character are unacceptable for ANO and the party, therefore, considers Drgonec's departure to be a closed matter."

Drgonec, the head of the parliamentary constitutional committee, told the media that he would act independently, but preferred to wait for ANO's decision rather than resign from the committee.

Drgonec's support for the ruling coalition in parliament remains uncertain. Although he said that he had "no reason to vote against the coalition", he also noted that he would not "blindly support everything [it] proposes."

According to Ľuboš Kubín, political analyst with the Slovak Academy of Sciences (SAV), the controversy around Drgonec is just further proof that, "ANO is not a classic party, but rather a company in which political nominations are bought and sold."

"ANO doesn't have a single goal that binds the party together and unifies it," he told The Slovak Spectator on May 31.

Kubín did not expect any major problems as a result of the ruling coalition losing control of another MP. "The situation in parliament won't change considerably. The coalition has learned to look for the support elsewhere, especially among independent MPs," he said.

Kubín also said it was not easy to foresee "whether the erosion of the coalition relations would continue."

"It is clear, however, that ANO's decision not to support the university reform prepared by KDH Education Minister Martin Fronc and, later, its refusal to back him in a confidence vote was not a standard stance, especially considering that, during the two years [since the national elections in autumn 2002] ANO hadn't raised any objections against the reform or the minister," he said.

On May 29, Rusko said that the ANO wouldn't oppose reorganizing the cabinet if it would calm the situation within the ruling coalition.

About a week before that, the KDH's Hrušovský even suggested early elections as a resolution to the current crisis. Observers labeled the idea 'unrealistic', and the ANO also opposed it.

Nonetheless, KDH rejected speculation that it would take revenge on the ANO for failing to support Fronc in the confidence vote held on May 25. The SDKÚ and the SMK want to take the current cabinet to the end of its regular term while preventing possible cabinet shifts.

Ahead of the Coalition Council meeting held on June 1, PM Mikuláš Dzurinda told journalists that he was determined to do his best to keep the ruling coalition together.

"For seven years now, I have acted to ensure Slovakia has a stable government," Dzurinda said.

At the meeting, however, the KDH surprised the ANO, and the rest of the coalition, with an ultimatum - should the ANO break the coalition agreement again, the KDH would ask Dzurinda to recall ANO chairman Rusko from the post of Economy Minister.

"If the PM does not do so, KDH will leave the cabinet," Hrušovský promised.