Is the constitution dead?

DESPITE opinion polls predicting a 'Non' before the May 29 referendum on the EU Constitution, the decisive nature of the French rejection still surprised many political commentators. 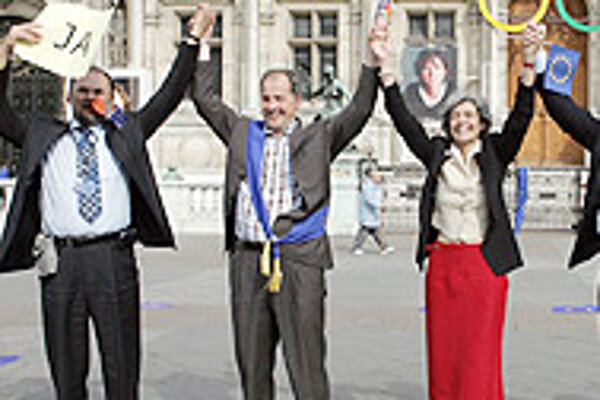 Font size:A-|A+0
DESPITE opinion polls predicting a 'Non' before the May 29 referendum on the EU Constitution, the decisive nature of the French rejection still surprised many political commentators.

Conventional wisdom before the referendum had suggested that the higher the turnout, the better the chances it would pass. Therefore, the fact that almost 70 percent of eligible voters took part is what makes the victory for the opposition to the EU Constitution all the more remarkable.

In order to understand and interpret the result, though, we first need more analysis of voting patterns across France and its various social groups.

French public debate leading up to the referendum focussed largely on issues that had at best very little direct, or even indirect, bearing on the EU Constitution's contents and possible implications, leaving many French voters still asking the underlying question about both the political and geographic limits of EU governance.

Therefore, understanding French concerns and fears may in some respects help us learn more about broadly shifting public attitudes vis-a-vis the Union. Although preliminary results indicated a somewhat predictable gap between French city voters (in favour) and voters from the countryside (against), a more intriguing gap emerged between the older generation (more people voting in favour of the Constitution) and younger voters (many rejecting the constitutional treaty). This suggests that a detailed examination of the results might not only provide a good lesson for France and offer a remedy out of the current crisis within the Fifth Republic, but address matters that concern all EU member states.

Most tangibly, of course, it would address that fact that the constitutional treaty seems both legally and politically dead in its current form. Successful ratification by all 25 member states was an essential condition. That's why, and especially after Sunday, the term 'constitutional treaty' rather than 'EU Constitution' seems more pertinent. Can any remains of the treaty be saved? Two possible scenarios come to mind.

First, and more realistically, I think the parts of the treaty that are a matter of some broad consensus among the EU member states and already under construction, such as the establishment of the EU's External Action Service, might be salvaged through a political agreement at the highest level, as they do not require a change in the founding treaties. However, the most far-reaching and controversial parts of the EU Constitution, such as the new definition of qualified majority voting or the establishment of a permanent President of the European Council, are extremely unlikely to come into effect.

This plain conclusion would appear to be: let's forget about fundamental institutional and political changes within the EU-25, at least until a different generation of political leaders comes around. For now, we shall have to linger on with what we have managed to agree on thus far.

The second scenario that has been suggested by many EU leaders boils down to continuing with the ratification process in all those countries that have yet to vote on the constitutional treaty. Frankly, I do not see this as a viable option. How can the leaders of other EU member states motivate their voters when the significance of any future referendum is highly questionable? What would the practical consequence of a Dutch, Czech or English person voting 'Yes' be after France's decisive 'No'?

The political elite faces the fundamental problem of having no clear incentives for the voters. Of course, all those countries, whose leaders had originally committed to a referendum, could suddenly decide to ratify in parliament and create pressure for France to come aboard. However, such a turn of plans would cast real doubt on the legitimacy of the whole process. In addition, and more importantly, it offers no way of resolving the key problem of the French "No".

Two ways - a new referendum or re-negotiation of the constitutional treaty - have been suggested as a way of overcoming the result of Sunday's vote. I do not think that either one offers light at the end of the tunnel. First, taking into account the tradition of French democracy, another referendum on the same issue and the same question is very hard to imagine, even if France's political landscape changed and President Chirac's government were replaced. Therefore, most French analysts and politicians rule out the chance of a new vote.

Second, any future re-opening of treaty negotiations hardly guarantees a new agreement. On the contrary, given the difficulties with achieving consensus on the current text, I believe that any new talks on the EU Constitution would most likely produce more mess and not a single, mutually agreeable outcome.

After all, major French concerns over the EU Constitution had to do with the state of domestic politics and a belated debate on the effects of EU enlargement, combined with fears of starting EU entry talks with Turkey, and a rather peculiar interpretation of the constitutional treaty as a springboard for implementing a neo-liberal economic and social agenda within the EU.

That last point seems particularly strange because the text of the EU Constitution is politically fairly neutral and principally offers a framework for making and implementing concrete policies by EU institutions in the future.

In conclusion, there is no ready answer to the questions of what and how the EU member states ought to re-negotiate in order to satisfy France's objections.

We must go back to the drawing board, but the chalk is likely to stay untouched for some time. Instead, the Union will face a period of tough consolidation with many protracted negotiations.