PRIME MINISTER Mikuláš Dzurinda returned home from his May 22-28 trip to South Korea and Japan carrying some valuable souvenirs - an investment protection agreement with South Korea, good contacts for Slovak companies, and the keys to a brand new car! 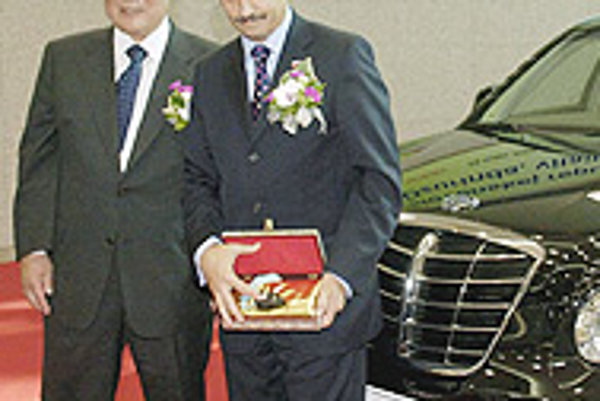 Font size:A-|A+0
PRIME MINISTER Mikuláš Dzurinda returned home from his May 22-28 trip to South Korea and Japan carrying some valuable souvenirs - an investment protection agreement with South Korea, good contacts for Slovak companies, and the keys to a brand new car!

Dzurinda's trip to the Far East was to promote Slovakia as a business investment environment, which has already attracted large investments from Japanese and South Korean companies, most notably from South Korea's KIA Motors.

On May 22, the PM flew to Japan, where he met with his Japanese counterpart, Junichiro Koizumi, as well as Emperor Akihito and his family. While the royal family was interested in global issues, PM Koizumi inquired about the 19-percent flat tax, wondering what effect it has had on Slovakia's state budget.

Japan currently imposes a corporate tax rate of around 50 percent. However, it is planning to revise its tax system along the lines that Slovakia has adopted.

Dzurinda announced that Slovakia is bidding for a large Japanese investment earmarked for Central Europe and that Slovakia had already beaten off competition from Poland, the Czech Republic and Romania.

However, the PM did not name the company, which is currently evaluating Slovakia as an investment site. The company is expected to decide on the location by mid July.

"We want more added value investments and we want to penetrate the hi-tech sector," Dzurinda said, adding that Japan is one of the strongest economies in the world.

However, Japanese businesspeople are not very enthusiastic about investments in the hi-tech sector in Slovakia.

At a Japan-Slovakia investment seminar, Panasonic manager Noriyoshi Iwamoto said that for Slovakia to receive hi-tech investments it needs to further develop its industrial parks and widen its network of sub-suppliers.

Iwamoto believes that Slovakia is not yet ready to produce final hi-tech products. Japanese business is also hesitant about Slovakia because of the low level of complex services offered by the Slovak industrial parks and the lack of road infrastructure. Another criticism is that Slovak university graduates have too much theoretical knowledge and too few practical life skills.

Cabinet spokesperson Martin Maruška defended Slovakia against the Japanese criticism. "The strategy for the development of competitiveness in Slovakia has been approved by the cabinet and is valid until 2010. It was prepared by the Finance Ministry and also includes innovation policies. The main business activities supported are development and innovation," he told The Slovak Spectator.

Dzurinda and his team received quite a warm welcome in South Korea, where the PM signed a contract ensuring mutual investment protection and support between Slovakia and South Korea.

The contract provides for South Korean companies to claim for damages caused by the state through the Slovak courts. Slovakia already has similar contracts with 38 countries, including all EU member states and the USA.

Spokesperson for the Finance Ministry Peter Papanek explained that most important features of these contracts are the guarantees on the free movement of capital, profits, interests, dividends, payments, returns on expropriation of investments or compensation on damages caused within the country of investment.

There was a real surprise for the Slovak PM when KIA/ HYUNDAI representatives presented Dzurinda with the keys to a brand new KIA Opirus limousine.

Such was his shock that the Prime Minister dropped the keys to his expensive gift. Dzurinda managed to bat away any criticism by saying: "This is a present for Slovakia, not for me."

The KIA officials said the present was a token of the company's appreciation for Slovakia's, and especially the cabinet's, approach to investment hurdles during their initial investment project.

The Slovak PM did not take the new car back with him, however. He left it to KIA to make the transportation arrangements.

Alongside his visit to KIA Motors, Dzurinda also visited Samsung and Sony, companies that have already invested in Slovakia, on his Far Eastern visit.