Pay as you drive

INSTEAD of paying a unified annual highway toll, drivers of trucks in Slovakia will pay only for distances that they actually drive. The Ministry of Transportation, Post Offices and Telecommunications intends to introduce new electronic road user charging, which should start functioning in 2006. 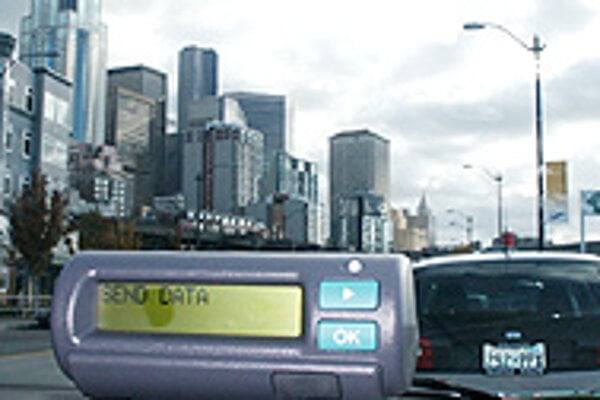 Font size:A-|A+0
INSTEAD of paying a unified annual highway toll, drivers of trucks in Slovakia will pay only for distances that they actually drive. The Ministry of Transportation, Post Offices and Telecommunications intends to introduce new electronic road user charging, which should start functioning in 2006.

Introducing electronic road user charging is also a condition set by the European Union, which wants to ensure interoperability in highway charging systems.

"The Ministry of Transportation, Post Offices, and Telecommunications as well as National Highway Company are planning to launch electronic charging of users of highways, speedways, and routes in the middle of 2006," Tomáš Šarluška, spokesman for the Transportation Ministry told The Slovak Spectator.

He continued: "The collected fees will be used for paying the future debt on loans from the European Investment Bank, other bank houses, or private investors in the PPP system [public-private partnership] granted for highway construction."

The ministry intends to announce an international tender for a company to establish and administer the new system in September next year, once parliament has approved a new Act on electronic charging.

According to the Transportation Ministry, the law pertaining to electronic road user charging should come before the cabinet by August of this year.

Economic return on investment will be the main criterion when selecting the winner of the international tender, the ministry has several times stated. Although the state will not be directly involved in the day-to-day operation of the system, it will receive part of the profits.

Currently, Slovakia charges for using highways through special highway stickers. Drivers can buy yearly or weekly stickers and have to pay a specific amount no matter how far they drive.

There can be various forms of electronic road user charging. Two main systems are based on DRSC microwave and GPS technologies.

The DRSC microwave system which is used in Austria and Italy, for example, requires the construction of special gates with DRSC scanners installed on every charged section of a road.

Each vehicle must be equipped with DRSC on-board units (OBU) - special stickers that register when a vehicle has passed through a gate. The collected data is then conveyed to a centre, which then processes the information.

GPS and GSM satellite systems mean equipping vehicles with GPS OBU, a device that enables vehicles to be located through GPS signals. They calculate how far a driver has driven on any section of road by using geometrical methods on a stored digital map. The collected data are sent via a mobile radio connection to a centre that processes the data. Such systems are operational in Germany and the US city of Seattle.

Advantages to the satellite system are that it is possible to use the system to provide traffic information or help in administering a fleet of vehicles and it costs relatively little to spread charging across different classes of roads.

According to the study by international consultancy firm Schild & Partner conducted for Siemens has several alternative methods for electronic charging of trucks.

- Charging for using highways through microwave technology for all trucks or through a combination of satellite technology and manual booking for occasional users.

- Charging for highways and part of routes with dense traffic, again using microwave technology for all the trucks, or satellite with manual booking of occasional users of these types or roads.

- Charging for all the roads, with discounts for using highways or routes with dense traffic. The data collection would be realized through microwave or satellite technology and tachographs.

Based on the results of Schild & Partner's study the first alternative (paying only for highways) would, if using microwave technology, require ploughing 31 percent of all incomes back into the operation of the charging system. If using a satellite system, 57 percent of incomes would be required. In both cases, the number is just too high. The EC recommends a cost/income ratio of 15 percent.

The second alternative (paying for highways and routes) changes the preference in favour of the satellite system (25 percent for satellites and 35 percent for microwave) but the cost/income ratio is still high.

Only the third alternative (all roads) achieved an optimal cost/income ratio - less than 15 percent when using the satellite method and 20 percent for the microwave. With this alternative "there are also fewer options to avoid road charges and the use of better roads (motorways and routes) is encouraged through discounts," reads Schild & Partner's study.

Additionally, the third type of road user charging is based on satellite technology that complies with EU recommendations. One of the reasons is that the EU invested in the development of the Galileo satellite system.

Furthermore, while DRSC gates are not able to read GPS OBU, the satellite systems are able to acquire the data from microwave DRSC OBU. This suggests that the satellite system would be better suited for ensuring interoperability of road systems, which is one of the main EU goals.

The Slovak Transportation Ministry still does not have a clear idea what a new system will look like and what technology it should be based on.

So far, the ministry has said it does not prefer either of the two systems. Šarluška from the Transportation Ministry only added that the charging model will include just highways, speedways and routes parallel to highways.

The ministry so far does not intend to charge for other types of roads. According to Šarluška, only vehicles weighing more than 3.5 tonnes would be charged.

Insiders agree that the introduction of electronic road user charging will mean a certain increase in costs for transportation companies. However, the ministry did not calculate the exact impact.

Šarluška explained the way of calculating the price per one kilometre: "As concerns the price for one kilometre [for transportation companies] - its calculation will be done according to a formula approved by the Council of EU Transportation Ministers. National economic indicators will be included in the formula."