THE PORT of Bratislava is hoping for a rapid increase in its volume of business once Bulgaria and Romania join the EU. When those two countries complete EU accession, international companies will have a new market of 30 million consumers. 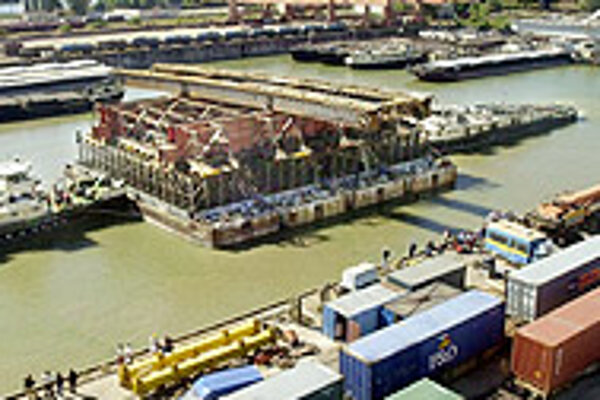 Font size:A-|A+0
THE PORT of Bratislava is hoping for a rapid increase in its volume of business once Bulgaria and Romania join the EU. When those two countries complete EU accession, international companies will have a new market of 30 million consumers.

"After Romania's and Bulgaria's entry into the EU, we expect an increased exchange of goods and commodities between these countries and EU member states," Juraj Bohunský, spokesperson of Slovenská plavba a prístavy Bratislava (SPAP), which administers Slovakia's ports, told The Slovak Spectator.

Tomáš Šarluška, spokesperson for the Transport Ministry would agree that river transport will increase. Šarluška pointed out, however, that it is not only business on the Danube that is on the ministry's agenda, but it also has plans to extend and develop river transport on the Váh River, which runs through Slovakia and flows into the Danube.

Slovakia joined the large arterial river transport system that connects the Rhine, the Main and the Danube back in the 1970s. That opened the way for the country to transport goods by river from the heart of Western Europe all the way to the Black Sea.

Today, Bratislava port ships around 3.2 million tonnes of cargo annually. However, that leaves a lot of the port's capacity unused.

Bohunský explains the present situation as a result of the change in the functioning of the economy following the Velvet Revolution in 1989. When the Council for Mutual Economic Assistance (COMECON) ceased to exist, huge amounts of cargo, shipped daily by river, stopped suddenly from one day to the next.

A new business and production environment also led to a shift from river to road and rail transport.

Šarluška believes that this trend developed as a result of a lack of flexibility in river transport.

Producers need a means of transport that is reliable and is not affected by the water level or by the location of the ports themselves. Road and rail networks are so widespread that it is possible to ship cargo from door to door. On the other hand, shipping by river requires another means of transport for goods to reach their destination.

The way to the Black Sea has been open for some time now. "Administrative formalities for river transport are minimal," says the Transport Ministry.

Even though car producers in Slovakia are not yet in favour of river transport, however, SPAP is in the process of luring the car industry to its ports.

Its roll-on-roll-off system enables cars, lorries or even combine harvesters to be driven directly onto ships. More than 200 cars can be placed on any ship at any time, which means good economies of scale for car producers.

Bohunský also believes that shipping of cars on rivers is much safer than transporting them by road or railway. "There is no danger of damaging the cars. Transporting cars by road or train is a different matter, causing producers large financial losses," says Bohunský.

Compared with other EU member states, Slovakia does not give river transport the support it needs, says Bohunský. He said it is a shame that river transport is not on a priority list even though it is cheaper and more environmently friendly than other means of transport.

Bohunský however believes that increased traffic on the roads and pressing ecological and environmental issues will force the government to re-evaluate its priorities and persuade Slovakia to start helping the river transport industry.