POSTAL services in Slovakia should be liberalized two years sooner than previously planned. Alternative postal operators could be offering a full range of postal services from 2007. 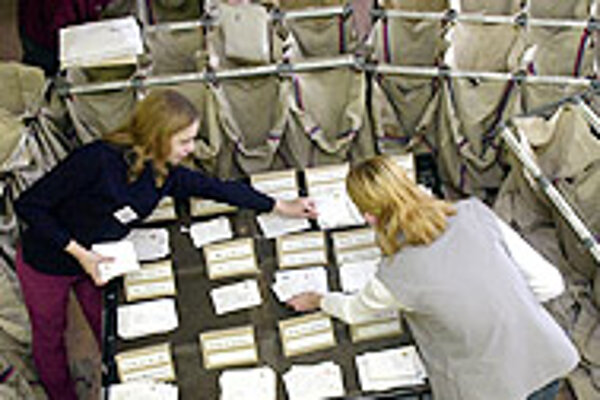 Font size:A-|A+0
POSTAL services in Slovakia should be liberalized two years sooner than previously planned. Alternative postal operators could be offering a full range of postal services from 2007.

While Slovak Post worries that it might not be given enough time to prepare for liberalization, express delivery firms said that its worries were baseless.

"The process of quicker liberalization of the postal services market in the current situation brings significant risks, mainly from the point of view of reliability, stability and quality of postal service that each EU member state is obliged to ensure," Bela Lisáková, head of external and internal communication at Slovak Post told The Slovak Spectator.

She pointed out that with the speeding up of the liberalization process it will be necessary to create an effective legislative and regulatory framework, including a system of granting licenses to provide universal postal services and legislation providing access to the public postal network.

According to Slovak Post, it will also be necessary to introduce regulations that ensure maintenance of affordable prices for services. Its opinion is that liberalization is coming too soon.

Lisáková added: "It is clear that Slovak Post as a provider of a universal postal service in Slovakia will not have enough time for carrying out its development projects, implementing new technologies and innovation of postal services to strengthen its competitiveness.

"Slovak Post dated the accomplishment of its development projects at the end of 2007, envisaging a complete liberalization of services in 2008, which is even sooner than EU legislation requires [January 1, 2009]."

Slovak Post emphasized that postal operators in the pre May 1, 2004, member countries (prior to Slovakia's EU accession) have got a significant lead in the gradual decrease of postal exclusivity and compared to new EU countries they have a time advantage for building up their position on the market. Additionally, older EU members have a better technological background.

"In general, liberalization has been sharper in the new EU countries compared to the original members," Lisáková of Slovak Post said.

The Slovak cabinet knows about possible risks for Slovak Post but is still convinced that pluses from postal services liberalization will outweigh the minuses.

Apart from a drop in employment in Slovak Post the analysis mentioned the risk of deterioration of postal service in remote regions and villages.

The government material reads: "Experience from countries where the postal services market has been fully liberalized showed that the competition is not able to offer postal services on the whole territory [of a state] and is concentrated only in the largest agglomerations, which bring profit.

However, the cabinet considers the faster liberalization as the best option: "Due to the need for competition development the Ministry of Transportation of Post Offices and Telecommunications recommends accepting alternative number 3, proposing the liberalization of the postal business environment with a significant decrease of weight and price limit at 50 grammes and 2.5 times the price from January 1 2006, and a complete liberalization, e.g. abolishment of postal exclusive right, from January 1 2007."

Some of Slovak Post's potential competitors - express delivery firms - do not think that they would be in too much of a hurry to try and replace Slovak Post once full liberalization is introduced. The reason is cost.

"In the future, DHL's core business will still be express delivery service and road goods shipping. The legal amendment will thus not impact us. Current exclusive postal rights concern letter consignments up to 100 grammes that other firms cannot deliver for a price lower than 3 times Slovak Post's price.

"It is true DHL delivers letter consignments up to 100 grammes but it is only a small percentage. Additionally, DHL has a price much higher than Slovak Post because of real costs on the express delivery of such consignments," Katarína Frcová, marketing manager of DHL Express told The Slovak Spectator.

So far, in the EU, only Sweden, Finland, and Estonia have fully liberalized the postal services market. Spain and Great Britain have minimal exclusive postal rights.