SIMON Yates' witty insight provides relief to the tales of risky mountain adventure he recently shared with a Bratislava audience at the Mountains and City festival. His laid-back manner seemed to transmit the message that, ok, climbing perilous mountains at high altitudes in bad weather is demanding; "but hey, that's the fun". And he's a convincing speaker. 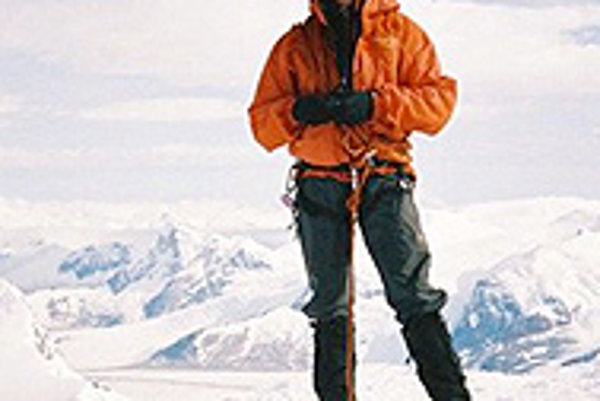 Font size:A-|A+0
SIMON Yates' witty insight provides relief to the tales of risky mountain adventure he recently shared with a Bratislava audience at the Mountains and City festival. His laid-back manner seemed to transmit the message that, ok, climbing perilous mountains at high altitudes in bad weather is demanding; "but hey, that's the fun". And he's a convincing speaker.

Yates is a man who knows all about the border between life and death. He is the "hero" of one of the most famous stories in recent mountaineering history.

It was in 1985, when the young Yates and fellow-Briton Joe Simpson attempted to reach the summit of Siula Grande in Peru. They planned a quick ascent using minimum equipment. They reached the summit but on the way down Joe broke a leg. Given the treacherous conditions, Simon decided to tie Joe to a rope. Gradually letting themselves down, the two slowly continued descending until Joe went over an overhang with no way of climbing back. After an hour and half of hanging on, Simon could hold on no longer. He cut the rope and Joe fell into a crevasse.

Luckily, Joe survived the fall and found a way out. But the act of cutting the rope has become an inseparable part of both climbers' lives, though primarily of Simon's.

Shortly after the incident, a British newspaper journalist accused Yates of "trying to sentence his best friend to death, and then with one swift cut of his knife, carrying out the execution". Later, a review of Simpson's book,

Touching the Void published in 1988, called the incident "the biggest cock-up in the history of modern climbing". In November 2003, Simpson's book was filmed (Touching the Void) and the story of Siula Grande spread far and wide.

The Slovak Spectator asked Simon Yates about Siula Grande and his life since then.

The Slovak Spectator (TSS): The release of Touching the Void two years ago must have reopened issues that had long since simmered down. How do the recent reactions of the public, and in climbing circles, compare to reactions from when you first returned to the UK?

Simon Yates (SY): They were a lot less hostile. Some people were quite hostile to me in 1985. Most climbers, who took the time to come and talk to me and found out what had actually happened, were fine. But there were a few older climbers, who took those words [of the British newspaper journalist] literaly and made a decision prior to meeting me. Nevertheless, it was very short lived.

TSS: Then there was another cycle of it, when Simpson's book was published. How did this compare with the first episode?

SY: I was not in Britain. I was away for a year and half. I wasn't aware of any reactions.

Certainly, the reactions started with the movie, because the movie took the story to a bigger audience. Climbers were already familiar with the story by then. I don't think they are particularly interested in it any more. Maybe the younger ones who haven't heard the story before... I don't have any problem with it; I have a very good reputation in the climbing world. The list of climbers that I climb with in Britain is a testimony to that.

TSS: Certainly there have been worse accidents in mountaineering, but the incident on Siula Grande in Peru is one of the most famous. How did the weight of that recognition affect your climbing?

SY: It didn't. I went climbing very quickly after that. Maybe four or five weeks later I was in the Alps. I personally rationalize this - if Joe had died then it would have been a very different thing. But Joe didn't die. He lived.

Those days in the base camp, I was in a terrible state of shock. I'd not reached the point when I was grieving for the loss of Joe but I think that would have come later. But Joe came back, so that made things right for me.

TSS: Do you ever wish people would move on and concentrate on your recent achievements instead of Siula Grande?

SY: Yeah, sometimes it's a little irritating. But at the same time it has been beneficial to me. It's given me the publicity - the book and the film have given me a name, which makes it easier for me to make a living as a mountaineer.

TSS: It's been 20 years since the incident. What changed since then?

SY: When I reached my late 20s or early 30s, I sort of began to think of my own 'mortality', and the risks I was prepared to accept in order to be a climber. Thanks to that I became a much safer, more cautious climber. A maturing personally helped me to mature as a climber.

TSS: Given your experience, what advice would you give to climbers?

SY: Young climbers have to be very careful. What we were doing was perhaps quite ambitious for a first time in big mountains. We made a lot of very simple mistakes - we were up eating and drinking and we carried on climbing after it got dark and we got cold. A big part of climbing is survival skills, keeping yourself fit so that you can climb effectively. And we were not doing that very well.

TSS: You have a year-old daughter. In what way does your choosing to keep climbing impact your personal life?

SY: My choice of climbing means that I am away from my wife and daughter [a lot]. I tend to be very cautious; I don't want to leave my daughter without a father. But at the same time, I don't want to give up climbing either. In the village I live in, I know people who drive trucks, leaving families for weeks. I don't think my job is any different.

TSS: What have you got your sights fixed on next?

SY: I will go to Nepal in the autumn, as a guide. Then I head on again to Tierra-del-Fuego, an island at the bottom of South America.

TSS: What are the climbing goals you want to reach?

SY: There's a lots of them. But they might not mean much to the general public, only to climbers. For example, I don't have a desire to climb Everest. I have a forever-changing list of mountains that have not been climbed before.

TSS: Why is it forever-changing?

BORN in Leicestershire, UK, in 1963, climber Simon Yates is more then just "the guy who cut the rope".

While still in school he knew that the first step to becoming a climber was to set out on a journey every time he wanted to climb. And today he's still travelling, spending an average of three months away from home every year.

Apart from climbing Simon writes, takes photographs, holds lectures and acts as a guide to tourists in the mountains. He takes care of his garden, goes fishing, biking and hiking in the local hills of his homeland.

His first book, Against the Wall (1997), which captures a "vertical experience" on Central Tower of Paine, Chile, was short-listed for the Boardman-Tasker Award for mountain literature. The Flame of Adventure, his second literary attempt published in 2001, is an account of his climbing experiences and various climbing tricks he used to shock his fellow construction workers with, also touching on the famous epic on Siula Grande. The book was an award candidate at the prestigious Banff Mountain Book Festival.

Simon has climbed with Greg Child, Doug Scott, and Andy Cave. His favourite areas to climb are Pakistan and Patagonia. In the Pakistani Karakoram, he has climbed many peaks, including first ascents of Leyla Peak (6,300 metres) and Nemeka (6,400 metres) in Hushe, a second ascent of Lobsang 2 on the Baltoro and various 6,000-metre peaks on the Hispar glacier. Among his most notable achievements is climbing the new route on the Central Tower of Paine in Chile.