Girl coronet - a symbol of youth

HEADGEAR has always been an important part of the folk costume, its purpose and style developing over history. In ancient times, it served the practical function of protecting one's head from heat, cold or attacks. And, from the aesthetic point of view, it was the crown of the whole folk outfit. 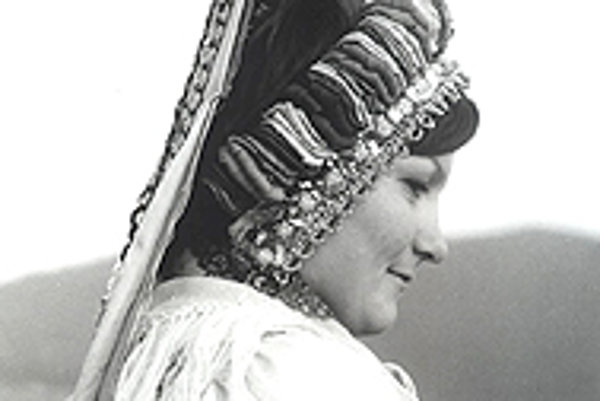 Font size:A-|A+0
HEADGEAR has always been an important part of the folk costume, its purpose and style developing over history. In ancient times, it served the practical function of protecting one's head from heat, cold or attacks. And, from the aesthetic point of view, it was the crown of the whole folk outfit.

When talking about girls' headgear, it is important to mention the parta - a decorative coronet - which was worn on festive occasions, to church, or on wedding days. Examples of partas from various regions of Eastern Slovakia can now be seen in the SNM's rich ethnographic collection of Ukrainian and Ruthenian Culture in Svidník.

Making partas was a rather complicated process performed by only the most skilled and handy women. As well as being festive, its design was also meant to express the status and feelings of its author. The coronet's base was made from a hard material, such as cardboard, and covered with a piece of single-coloured material, usually black velvet, which was then decorated with ornaments made from colourful beads, spangles, golden and silver ribbons and embroidery. The nape had multi-colored or flower-patterned ribbons that hung down the back to skirt length. These ribbons were fixed at the dienko - the top of the parta shaped into a rectangle or an oval that was decorated with similar materials as the coronet itself.

Hairdo and headgear distinguished girls from married women. A girl's parta symbolized maturity, youth, and innocence. As an inseparable part of the wedding ceremony, it was worn together with a green periwinkle (vienok) rim that symbolized fidelity in love and matrimony, and was believed to have magical protective powers over the bride.

In the Spiš region, for example, these vienoks resembled a small bunch of metal sparkling twigs joined together with thin metal spirals that flickered in the light.

After the wedding ceremony was over, a parta was kept or even displayed on the wall in an honoured part of a room. The bride's plaits were bound at the nape into chimli, konti - a kind of a bun - and covered with a bonnet. This meant the bride was married and now "bonneted."