VLADIMÍR Mečiar remains the chairman of the opposition party Movement for a Democratic Slovakia (HZDS), a leadership position he has held for 14 consecutive years. 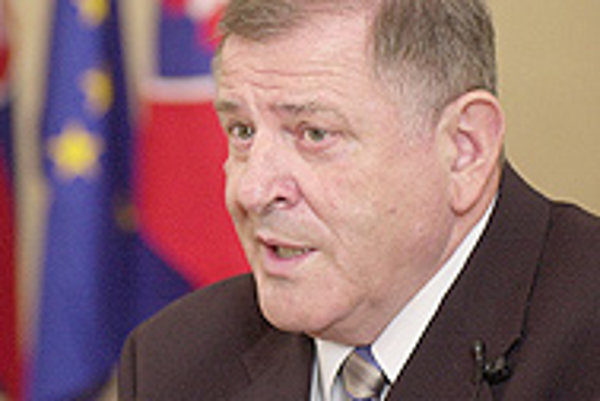 Font size:A-|A+0
VLADIMÍR Mečiar remains the chairman of the opposition party Movement for a Democratic Slovakia (HZDS), a leadership position he has held for 14 consecutive years.

According to Grigorij Mesežnikov, political scientist at the Institute for Public Affairs, the outcome of the HZDS' party elections confirms that Mečiar "remains strong and unchallenged in the HZDS".

On June 4, delegates of the HZDS national congress elected Mečiar to lead the party with a convincing majority of 255 votes out of a total of 257 present. In a separate vote, party members also elected two deputy chairmen, with the number of these officials down from the original five.

František Blanárik was re-elected as central secretary together with Viliam Veteška and Milan Urbáni as deputy chairmen. The vote for all three officials was put on a single ballot. In other words, party members could not support one candidate and reject another. Rather, they were forced to support all candidates or reject all three.

"Voting on two deputy chairmen and a central secretary in one vote is absurd. I think this can be considered a sort of a manipulation," he said immediately following the HZDS meeting.

Maxon was not available for comments. His assistant, Eva Garajová, told The Slovak Spectator that the MP started a spa treatment that would last for several weeks.

Both Veteška and Urbáni have been HZDS deputy chairmen before. However, they represent different opinions in terms of the movement's political orientation. While Veteška is known for his pro-opposition policy, Urbáni tends to favour cooperation with ruling coalition parties, specifically the Slovak Democratic and Christian Union (SDKÚ).

Former HZDS Deputy Chairman Ján Kovarčík said that the party was split between a tougher opposition policy on one hand and a more right-wing, pro-coalition stance on the other.

According to Mesežnikov, however, HZDS members are inclined towards the opposition, although perhaps not as extreme in practice as left-wing opposition party Smer.

"In the end, Mečiar will be the one who will decide on the party's possible coalition cooperation," said the analyst.

Shortly after the HZDS elections, Veteška told the press, "I know no two directions but just one - success of the HZDS. It should be a conservative people's party with a strong social basis. Our absolute priority will be listening to our voters. I know no other direction to go."

The HZDS has not made a final decision on its tactics for the regional elections. It remains open to regional coalitions depending on the individual political situations in the given regions.

For the national elections in autumn 2006, HZDS officials expect to gain 20 percent of the vote, which many observers consider unrealistic.

Mečiar's party earned 19.5 percent of the vote in the 2002 national elections but failed to find a coalition partner, thus remained an opposition force for the second election term in a row.

During the current election term, the HZDS has toned down its opposition rhetoric and has lost some voter support to Robert Fico's Smer. But Mečiar seems determined to get his party into the government. Putting Veteška and Urbáni in place as deputy chairmen is a tactical move, signalling the party's openness to a wide range of political partners.

After years of failing to forge coalitions, Mečiar says the HZDS has regained its coalition potential.

"We're able to talk to any party now and seek agreements," he said.

Although Mečiar plans to win 20 percent of the vote, regular polls show the HZDS with just 12 to 16 percent support.

"I am sceptical about the 20 percent goal. The HZDS is losing voters in great numbers. I would estimate their chances between 13 and 16 percent," Mesežnikov said.

The analyst thinks that the only way the HZDS could score higher is if voter turnout is low. The party's supporters are known for their voting discipline. However, Mesežnikov expects the 2006 elections to be well attended.

"I actually think that this election will mobilize voters," he said.

In his address to party delegates, Mečiar said that political change in Slovakia was a must and that his party would revise the current cabinet reforms if it rises to power.

"A change of this cabinet and the necessity of this change is our basic priority," said Mečiar.