A RECENT visit to Slovakia by the new Czech Prime Minister has deepened the rift between Slovak Prime Minister Mikuláš Dzurinda and left-wing opposition party leader Robert Fico of Smer. 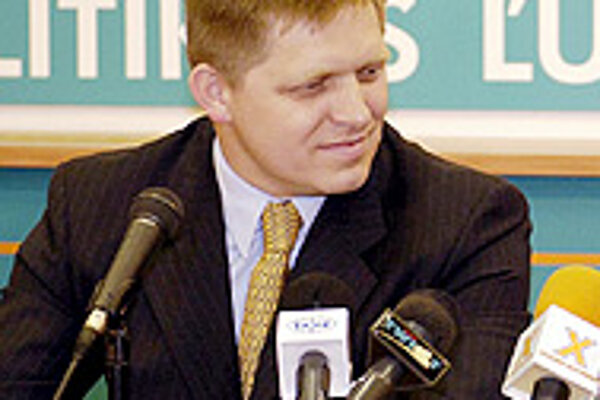 Dzurinda went so far as to accuse Fico of "unpatriotic" behaviour, claiming that Fico was attempting to use the official visit of the Czech prime minister for selfish political purposes.

Czech Prime Minister Jiří Paroubek, a social democrat of the ruling ČSSD party, made a series of official visits on June 7, ending his day in Smer's headquarters, where a joint press conference was held afterwards.

At the press conference, Fico highlighted the close relationship between the ČSSD and Smer in terms of political orientation and praised the Czech Republic's comparatively higher living standards.

"Whatever [economic] indicators we look at, all of them are more favourable in the Czech Republic [than in Slovakia]," said the Smer leader.

Fico also suggested that the Czech Republic's economic success is due to its left-leaning government, implying that a similar governance model could exist in Slovakia under Smer.

"The social democratic model which the Czech social democracy has been practicing for the last seven years is successful and represents an alternative form of government in Slovakia as well," said the Smer leader.

"We are trying to prove that the republic can be managed in a different way than the right-wing parties do it."

Dzurinda said that Fico attempted to "defame his own country" and presented unpatriotic views.

"The activities of the Smer chairman confirmed that this opposition party wants to dismantle the reforms and go back to the problems the country has already overcome," the PM said.

Finance Minister Ivan Mikloš, a member of Dzurinda's Slovak Democratic and Christian Union, attended the press conference to say that living standards in the Czech Republic have always been higher, but that Slovakia was now experiencing sustainable economic growth that would gradually overtake its Czech brother.

Political analyst Soňa Szomolányi from Comenius University in Bratislava agreed with Mikloš. However, she suggested that Dzurinda did not have to react as strongly against Fico as he did.

"It probably wasn't necessary to label Fico's opinions as defamation. From the political point of view, he was just criticizing the current right-wing cabinet, not the country as a whole," she told The Slovak Spectator.

She said that Fico's comparison between Slovakia and the Czech Republic, especially attributing the latter's economic supremacy to seven years of ČSSD social democracy was "hard-core demagoguery".

"It is impossible to speak of the current situation in the two countries without saying what preceded it. [After the split of Czechoslovakia in 1993], Slovakia went through a period of Mečiarism, including its shady privatization and bad economic policies. Up to this day the country bears the consequences of that period," she said.

During 1993 to 1998, when Vladimír Mečiar and his Movement for a Democratic Slovakia (HZDS) were in power, Slovakia suffered a series of economic blows. Mečiar's policies and non-transparent privatization put off foreign investors. The country also suffered from international isolation during that period because of what the international scene perceived as the government's undemocratic policies.

"People tend to forget that while the Czech Republic was becoming the post-Communist champion in the region, Slovakia was going down for years," Szomolányi said.

Smer, however, did not intend to comment on Dzurinda's criticism of Fico.

"We don't see it as necessary to comment on the PM's statements," Silvia Glendová, Smer's spokeswoman, told The Slovak Spectator.

Dzurinda does not think that the Czech prime minister's appearance at Smer headquarters would dampen international relations.

"I am confident that the Czecho-Slovak relationship will not deteriorate over Paroubek's visit to Smer," he said.

When asked at Smer's press conference where he felt better, in the company of the state's right-wing officials or at Smer's headquarters, Czech PM Paroubek answered diplomatically.

"I felt very good there, and here I am with friends," he said.