THE FERTILE plains of the Danube River valley, with its flat terrain and picturesque villages, make Western Slovakia and Lower Austria perfect for biking. But when it comes to cycling tourism, Slovakia is lagging far behind its sophisticated, bike-friendly neighbour. 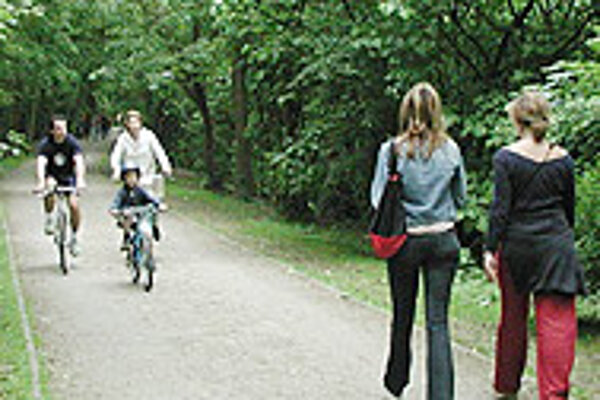 Font size:A-|A+0
THE FERTILE plains of the Danube River valley, with its flat terrain and picturesque villages, make Western Slovakia and Lower Austria perfect for biking. But when it comes to cycling tourism, Slovakia is lagging far behind its sophisticated, bike-friendly neighbour.

Austria has one of the largest networks of bike trails in Europe. For this reason, outdoors-oriented tourists flock there, spending their euros in small villages throughout the country as they pedal their way through. Industry experts say that with a little effort, Slovakia could attract cycling tourists just as easily, but for some reason, Slovak businesses are uninterested.

Despite the fact that Slovaks themselves are more into biking than ever, the Slovak tourist industry is not following the trend. Few business leaders grasp the potential that cycling tourism represents, and remain indifferent to the health benefits it offers. In such an environment, it is not surprising that Slovakia's cycling infrastructure is poor and related services virtually non-existent.

The non-profit sector in Slovakia is doing its best to make up for the industry's blindness. The Ekopolis Foundation, a Slovak environmental organization, has been a long-time advocate of alternative [non-motor-powered] transportation. As part of its Greenways and Amber Trail projects, Ekopolis has managed to create 1,500 kilometres worth of paths and trails in Slovakia over six years.

Ján Roháč is the manager of Slovakia's Greenways and The Amber Trail projects. He says that cycling tourism is becoming increasingly popular, and that ordinary Slovaks - those who have nothing to do with the tourist industry - are noticing a sharp increase in the numbers of cycling tourists to Slovakia.

"We are seeing a rise in domestic tourists travelling on bikes as well as tourists from near and further abroad - the Czech Republic, Poland, Germany, The Netherlands. The number of cycling tourists from overseas is also increasing," said Roháč.

He believes the reason Slovakia is not capitalizing on cycling tourism is because of a faulty perception.

"People have it stuck in their heads that only low-income tourists prefer cycling, while the richer ones would not 'stoop' to travel in such a way. This is simply not true. The purchasing power of cycling tourists is usually quite high. It is a pity that we are not yet prepared for them," Roháč told The Slovak Spectator.

While Roháč is proud of the various cycling routes his projects have created, he points out that paths themselves are only one part of the equation. There are many important conditions that make cycling tourism a success in a given country, including appropriate infrastructure in urban areas and services.

According to Roháč, Slovakia needs cycling infrastructure that would make cycling safe and accessible. He would like to see public institutions build a web of cycling paths connecting towns and cities, with special attention paid to making major intersections bike-friendly. Well-marked paths leading to holiday resorts and other places of interest to tourists are also needed.

On top of this, Roháč insists that offering cycle-oriented services is a precondition for success. "Look at Slovakia. There are no safe places to keep bikes in towns or tourist attractions. Signage for cyclists is lacking and information agencies have almost nothing targeting cycling tourists," he said.

Accommodation facilities are not prepared for cyclists, either.

"In a majority of [Slovak inns], there is no place to safe-keep bikes, no room for washing and maintaining bikes, and facilities do not give out their GPS coordinates," said Roháč. While he is critical of the lack of services, he is confident that individual Slovak entrepreneurs will accommodate cyclists once they realize the enormous payoff.

On the road: Greenways and The Amber Trail

The motive driving Greenways and The Amber Trail projects is to support an active way of life through the creation of non-motor transportation infrastructure.

Greenways projects in particular have a long tradition in Europe and the US. The projects focus on building trails for recreational sports like jogging, cycling, skating or walking. Projects take into account the social, economic and environmental impact that the proposed path will have. According to the Greenways philosophy, a successful project encourages the cooperation between local communities and municipal and local institutions and forms a suitable part of the environment.

The Ekopolis Foundation supported five Greenways projects in 2004, and four more in cooperation with Toyota in 2005. Among the 2005 projects are the reconstruction and transformation of a former railway route embankment in Zlatá Baňa near Prešov into a greenway, and the improvement of a Moravia cycling route between Devín castle and Devínska Nová Ves (part of Bratislava). All four projects in 2005 received Sk618,000 (€15,800) in total.

The Amber Trail flagship project is appropriately called The Amber Trail. It offers a special bicycle route stretching from Budapest to Krakow, passing through rural regions and small towns in Hungary, Slovakia and Poland. In those areas unsuitable for biking, car transportation is provided. Any profits from The Amber Trail - from tour operators, for example - go into maintaining and improving various sites along the route.

Roháč is passionate about greenways and hopes that the Slovak tourist industry and various entrepreneurs will open their eyes to the benefits.

"Greenways contribute significantly to good health. They help us spend leisure time nicely and limit car transport for short distances. They support tourism and help protect our natural and cultural heritage," he said.