EVERYONE has characteristics that may subject them to the criticism or even contempt of the larger community, whether it's violent behaviour or the "fault" of simply being different from the majority. 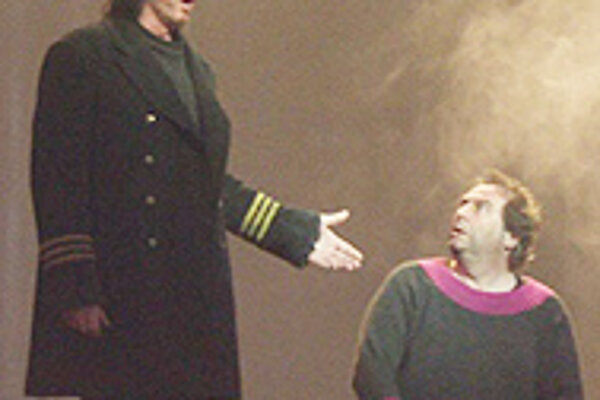 EVERYONE has characteristics that may subject them to the criticism or even contempt of the larger community, whether it's violent behaviour or the "fault" of simply being different from the majority.

This was the case with British composer Benjamin Britten, who always felt his personal life and beliefs set him apart from the crowd. "Britten was a peaceful man who came under frequent scrutiny," said Colin Graham, a world-renowned opera director who knew the composer. "He built walls around himself and built walls of friends around him."

Nevertheless, Britten was not prepared for the alienation he experienced as a result of his opposition to World War II. He had moved to the United States and Canada in 1939 to avoid the war, but moved back to England in 1942 and registered as a conscientious objector. For this, he was ridiculed in the English media as "abandoning his country in its time of need".

Sadly, Britten's career also suffered. During his time in Canada, he had composed the brilliant Violin Concerto, No. 15, which was rejected by England's Royal Philharmonic Society because the composer was "unpopular". Britten could only stick to his principles and plead his case with the public, stating "the whole of my life has been devoted to acts of creation and I cannot take part in acts of destruction."

But who has the right to judge another person? And what is judgment's ultimate effect, not only on the judged, but also on those doing the judging?

These are the heavy questions behind the opera Peter Grimes, Britten's haunting 20th century masterpiece that premiered at the SND last weekend. This was the theatre's final premiere of the season, so the scenery was more lavish and realistic than ever before, but theatre management should remember that singers full of energy, commitment, and artistic brilliance will always be far more thrilling.

The opera begins in the courtroom of a fishing community in the English countryside. Peter Grimes, a social outcast with a rough nature, is being tried for killing his young apprentice. The townspeople stir as they await Grimes' conviction and boil over when the Mayor declares the death an accident. Only Ellen Orford, the local schoolteacher who loves Grimes, believes he's innocent.

From his first notes, Jan Vacík (Peter Grimes) displayed the light, lyric quality perfect for the title role. As intended, Vacík's phrases flowed like the sea (a major character in this opera) and revealed a tenderness that contrasted Grimes' rough exterior. Martin Malachovský (Mayor Swallow), who utters the opera's first lines, immediately got lost in Britten's complex rhythms and never fully recovered.

This was a problem that plagued much of the performance. To demonstrate the dark harshness of this sea-weathered society and the gossiping mentality of its people, Britten uses cresting tonalities and syncopated, layered whispers between the ensemble and soloists. These qualities presented a serious challenge to the national theatre, which is most comfortable with styles more germane to its own history, such as Mozart and Dvořák.

The story continues as Grimes discusses his situation with Cpt Balstrode, one of his few remaining associates, who advises Grimes to leave town or marry Ellen, whose gentleness might change him. But Grimes refuses to marry her until he has gained respect. Ellen knows Grimes needs an apprentice for his livelihood, so, against the Mayor's orders that Grimes only use a man's help, she finds another young boy. A storm hits the town, but Ellen arrives back with the new apprentice, who Grimes quickly drags away to his cliff side hut.

František Ďuriač (Cpt Balstrode) demonstrated sound vocal technique, raising his hard palate to give his high notes resonance and dimension. Eva Šeniglová's (Ellen Orford) voice was pleasing, but too practical. Ellen is a caring person, whose love for Grimes hints there must be more to him than meets the eye, yet Šeniglová never provided more sound or sweetness than necessary.

By this point, though, Vacík, who had initially portrayed Grimes with the mildness of a child-like victim, began gasping and rolling his eyes to suggest insanity. Although communicative, this seemed premature. The townspeoples' hatred and guilt over the deaths of his apprentices does eventually drive Grimes to the breaking point, but the drama's tragedy lies in witnessing Grimes' forced transformation. Having that happen too early makes his insanity appear to be a character trait rather than the result of relentless persecution.

Later, Grimes is rough with Ellen and drags his new apprentice off to work. Townspeople returning from church see this and go after him.

At his hut, Grimes dreams about being rich and finally marrying Ellen. He tells the apprentice to jump onto a boat anchored below them, but the boy slips and plunges over the cliff to his death.

Some time later, with the townspeople on the hunt, Ellen and Cpt Balstrode find Grimes babbling and confused. They tell him that drowning himself at sea would be the most merciful death. Grimes agrees.

Director Martin Bendik clearly understood Britten's message. His focus placed Grimes and Ellen's argument at the beginning of Act II in front of a long rectangular box filled with hay and crosses. As the other townspeople sang at church, their large shadows were projected onto the box. These hellish phantoms served a chilling warning to the town's only "non-believers", a label under which Britten had suffered greatly.

At the opera's conclusion, Vacík fell to his knees and repeatedly mumbled the name "Peter Grimes", now an effective characterization of a broken man. Each note was sung with soft intensity and purity as Grimes finally came to terms with his fate.

If only we could all be conscientious objectors to judgment.