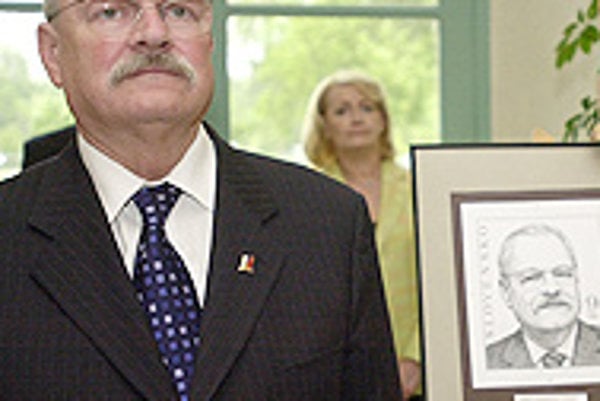 Once close to Vladimír Mečiar, Gašparovič distanced himself from the ex-prime minister in October 2002 by leaving the Movement for a Democratic Slovakia (HZDS) and founding his own party, the Movement for Democracy. Two years later, Gašparovič found himself nominated for president. When a strong opposition party, Smer, decided to support his nomination, Gašparovič won the election, beating out Mečiar in a suspense-filled race.

Gašparovič took 59.9 percent of the vote during a run-off race, while Mečiar took 40.1 percent. Gašparovič was sworn in as president on June 15, 2004.

While some analysts say that Gašparovič is an inconspicuous figure that does not stand out, others appreciate his avoidance of conflict.

According to political analyst Soňa Szomolányi of Comenius University in Bratislava, Gašparovič has capitalized on the advantage of taking office after Schuster.

During his tenure, former coalition politician Schuster developed into one of the biggest critics of the then-ruling coalition, which had nominated him to the presidential seat. Schuster involved himself in conflicts and wooed the populist vote by criticizing those who had put him in office.

"Gašparovič had an advantage taking over from Schuster. He is better than his predecessor in several aspects. He does not search for conflict and behaves consensually and openly. In terms of foreign policy, he generally keeps the official line presented by the prime minister and speaker of parliament," said Szomolányi.

The president has pledged to keep out of political turmoil in the future as well.

At a press conference on June 15, Gašparovič told the media that he intended to avoid political squabbles because they "have negative impact on the people".

In office, Gašparovič has managed to turn the presidential seat into the country's most trusted institution, boosting the public's trust in the office by 30 percent since June 2004.

According to the most recent poll carried out in May, the president (as an institution) is now trusted by 70.1 percent of Slovaks, followed by the Slovak Army with 60.4 percent and municipal bodies in general with 50.5 percent.

Other state institutions, such as the government, earn just 24.7 percent of respondents' trust; parliament receives merely 23.6 percent, next to last on the list of 11 institutions included in the poll.

Another poll, carried out by the MVK agency in April, showed that 42.7 percent of Slovak respondents think that the president has been successful so far in his term. Just 12.9 percent think Gašparovič a failure; 38.8 percent think his successes and failures balance out.

According to Szomolányi, the president's popularity is because "he presents himself as a president with a social sentiment. In fact, Gašparovič's slogan in office is 'I think nationally and feel socially'".

His party, Movement for Democracy, and Smer, the strong opposition party that supported his presidential bid, both follow left-wing policies. These stand in contrast to the current right-wing ruling coalition, lead by PM Mikuláš Dzurinda.

"With regards to his background, Gašparovič contributes to the balance and stabilization of the Slovak political scene. People who do not support the ruling coalition have a feeling that he stands for them and that they have someone in top positions to represent their interests," said Szomolányi.

According to the analyst, it is beneficial that Gašparovič fades into the background and does not provoke political fights.

"With his limited, largely ceremonial powers as a president, he should mainly be visible in times of crises or major events to give people a sense of direction. In this sense, his first year of the presidency has been successful," she said.

With Gašparovič taking few big decisions during his term thus far, analysts agree that the president's test will come next year, after the national elections in autumn.

"It will be interesting to watch him then, when he will have a chance to show whether he is a truly politically independent president," said Szomolányi.

According to Slovak law, the president appoints a party official, usually from the strongest political party based on election results, to set up the new government.

With the backing of national and left-wing parties in his own election campaign one year ago, it will be interesting see who he supports next year.

But before that happens, the political scene is awaiting the president's state of the nation address in parliament on June 22.