Shoeing the past through to the present

Sandro Botticelli's Venus is considered the ideal of female beauty. But Swiss sculptor Pavel Schmidt makes her ugly, applying unattractive bulky objects to her ample charms, covering her face and piercing her body. 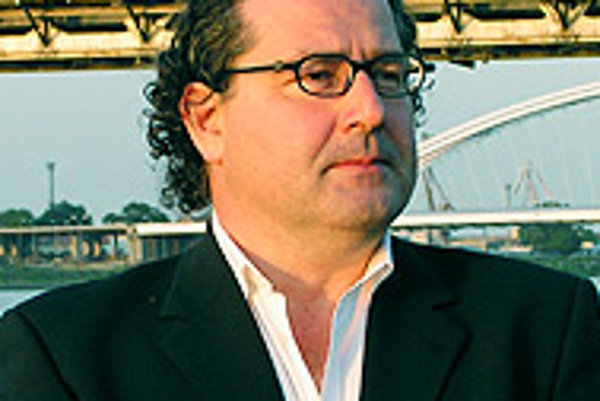 There are times when Schmidt goes even further. Adding a male counterpart, Michelangelo's David, he blows the statues up with explosives. Then he collects the fragments of their bodies and reassembles them into new works. Venus's head overlooks David's feet, and completed by other body parts and technical tubes and objects, it concludes the work's idea.

"I am accused of vandalism, of destroying artistic values," says the Swiss artist, born in Bratislava, "but I only portray situations that happen daily."

Forming one of the pillars of Swiss art, Schmidt is reacting to changes in political systems that lead to reversals in artistic values. His position is partially influenced by his childhood memories, when, as a 10-year-old boy, he had to leave Communist Czechoslovakia with his family.

Now, 40 years later, Schmidt is paying his first visit to the country where he was born. He helped to create a Swiss exposition for Art Bratislava, recently held in Aupark, and will return again soon to attend the opening of the Sculpture and Object exhibition, organized within the Summer of Culture and Castle Festival.

Despite nobody in Bratislava knowing his work, he refers to "our" culture. It touches him to hear of "Czechoslovak" culture, though he largely identifies with Switzerland.

As an artist he started with drawing and painting, later adding objects to his portfolio. Today he works in all art forms simultaneously, creating an organic artistic whole, which also work as individual media. "I can do an exhibition of just paintings or sculptures, but when I combine everything together I reveal more of myself."

To learn at least the basics of Schmidt's art, The Slovak Spectator talked to him on his recent visit to Bratislava.

The Slovak Spectator (TSS): The bases of your works are cheap, kitschy garden sculptures. Why did you choose such material?

Pavel Schmidt (PS): First we have to define this material - the sculptures. On one hand they represent kitsch but on the other hand they are the replicas of the paradigms of our art. There is Michelangelo's David, the Greek Venus de Milo and Botticelli's Birth of Venus transferred into sculptures influenced by consumerist demands.

They are the historic artworks we all know well. It's interesting to find these concepts in shopping centres, gardens... It fascinates me to watch what we make of our past and then I interpret it in my way.

I see myself in the function of a shoehorn for those observing my works.

TSS: The Baťa [Czech quality shoemaker] of the art market?

PS: Everybody has to choose his own shoes: the type, the colour they desire, as they have to wear it themselves. The same principle applies when choosing art - painting, sculpture or drawing. I only help to put it on. But they have to wear it; they have to see whether I tried to make any associations, give any clues. I gave them the shoe but they have to learn how to read [walk in] it, how to live with it. And when they like it - we can deepen the mutual discussion.

TSS: What is the message you try to send with your works?

PS: I am asking - in what world do we live? What does this world do to us? For example, the logic of the Venus wrapped in a measuring tape [one of Schmidt's works] goes as following: Venus is an ideal of beauty, an educational figure for artists - a standard by which to measure. A question arises: Why do we use these particular measurements?

PS: From a certain point of view, yes. Nothing is more unambiguous than one metre. And nothing is more freely interpreted than a piece of art. As you see, in this sense the measuring tape didn't help us at all [laughs].

TSS: Has the message you try to pass on ever been misunderstood?

PS: It happens when the understanding transfers at an aesthetic level. When someone asks me how is it possible that such an intelligent and mature person as me can do such terrible things. Because everybody knows Venus is beautiful but I make her ugly.

TSS: Can art be measured only through aesthetics?

PS: They measure it after what they would put on their walls. It's their good right and I have no intention to persuade them otherwise, and I don't want to. I often end up in difficult, often political debates when combining a garden gnome with Michelangelo's David, especially when the gnome is larger than David.

PS: I don't want to provoke anyone. I only want to portray what happens daily.

A few years ago, you experienced the destruction of statues of Lenins and Stalins. Before, different artworks were destroyed. The entire Central Europe is in the process of destroying monuments of preceding political generations. A journalist asked me after the Taliban destroyed the two Buddha statues whether that was art as well. The difference is, I would never touch an historical artefact.

I simply want to say we live here, in this world. I want to point to the man of today - the only living creature who would never be satisfied with just the mental defeat of his opponent. He needs to destroy completely - to steal his identity, devastate his cult places - to humiliate him spiritually to the very end.