Herd about the moove?

"THAT's horrible. What will that [Premier Mikuláš] Dzurinda come up with next?" Two elderly ladies shook their heads and tut-tutted as they observed a plastic cow hanging upside down on Bratislava's Hviezdoslavovo square. 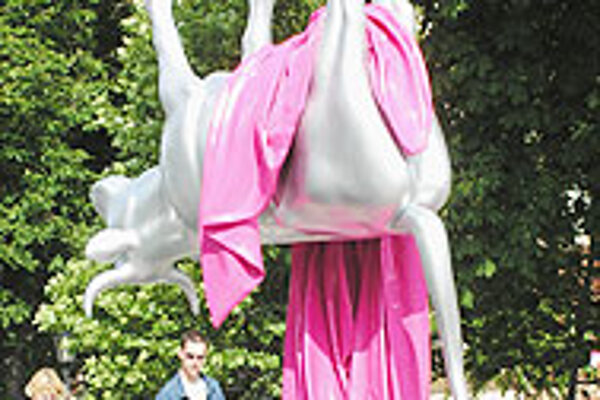 Font size:A-|A+0
"THAT's horrible. What will that [Premier Mikuláš] Dzurinda come up with next?" Two elderly ladies shook their heads and tut-tutted as they observed a plastic cow hanging upside down on Bratislava's Hviezdoslavovo square.

The premier and his government can, at least in this case, justifiably claim innocence.

The levitating cow is a creative work entitled Inspiring by artist Katarína Gáspárová. It belongs to a herd dulcifying the capital's centre as part of CowParade, a humorous worldwide art and charity project.

The government can be accused of taking a small part in this venture, however. One of Dzurinda's coalition partners, Pavol Rusko, painted his own cow.

Rusko's joyful yellow-blue Rusuľa, guarding the staircase to the Nový Most, shows the playful side of Slovakia's Economy minister.

"Mr Rusko introduces himself as an artist, a painter," said the organizers.

Rusko is one of 400 amateur and professional artists who approached the organizers with a proposal.

Eighty of them found sponsors, which has gradually enabled the cows to graze on the city's streets. By the end of June, the entire herd will have been let out of its artistic cowshed.

Gáspárová's cow is the tallest, reaching up to 3.12 metres. A cow lying in front of the Roland Café, half buried in a concrete block, weighs four tonnes.

"It's named The Last... and is supposed to look like a bench. However, people think it's a tomb. They have even laid flowers next to it," Filip Vagač from CowParade said.

The project's "oldest" cow is the work of filmmaker Juraj Jakubisko, which was introduced to the public in March and can be found on Primate's square. His Love Story Bathory was the first to cause a stir amongst the public.

"The paradox is that the krava [cow] is a curse in our culture. But thanks to it, the famous and not-yet-famous can introduce their artistic visions to the public at large," said Jakubisko.