GEORGE Bernard Shaw once said: "If a museum of the complete development of a shoe were founded, the material would portray the history of the culture from its early beginnings through complicated errors and perversity to the practicality of these days." 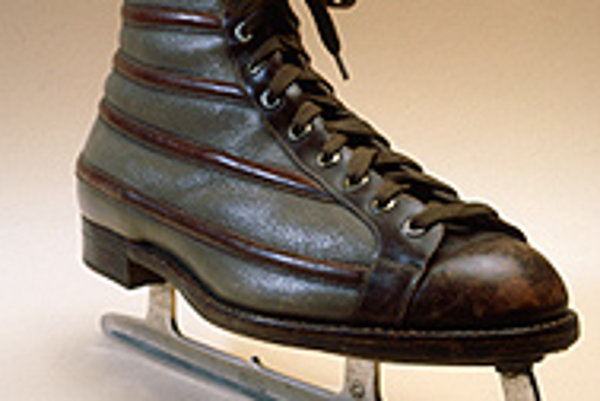 Font size:A-|A+0
GEORGE Bernard Shaw once said: "If a museum of the complete development of a shoe were founded, the material would portray the history of the culture from its early beginnings through complicated errors and perversity to the practicality of these days."

Perhaps the founders of the world-renowned Czech shoemaker Baťa envisaged such a museum when they gathered interesting examples of footwear from around the world.

A travelling exhibition of the Museum of Shoemaking in Zlín collection, entitled Boty, botky, botičky (Boots and Shoes of Every Kind), is on show at the Slovak National Museum in Bratislava. It consists of more than 300 examples of footwear and 60 shoemaking tools and instruments.

The history begins with replicas of footwear named after kings and aristocracy of the day. There are the throne shoes of the Bohemian King Wenceslas I, the brocade coronation shoes of the King of Bohemia, Charles IV, and the boots of Duke Albrecht of Wallenstein.

Among the most attractive articles is an original 3.75-kilogramme postilion jackboot from 1800, and a court shoe made from hamster skin in Prague in 1912.

Shoes manufactured in the Czech and Slovak branches of the Baťa company between 1894 and World War II will trigger the memories of the elderly attending the exhibition.

There are the famous séglovky (very cheap shoes), meltonky (winter shoes with buttons), kanady (combat boots), džeksny (shoes with skates fixed on them), and piškóty (ballet shoes). Women in particular will take pleasure in the collection of reptile and snakeskin shoes and handbags.

A unique feature of the exhibition is a collection of footwear from other continents. Of particular interest are the shoes from Cossack chieftains (atamans), as well as a collection of sandals from Africa and Latin America.

Probably the most attractive to a layman are the clogs of Buddhist monks from Japan; sealskin boots of the Inuit people from Alaska; moccasins of the prairie Indians; and the traditional Greek tsarouhia shoes.

Experts most value the collection of court shoes designed exclusively for the World EXPO in New York in 1939 and the nacre-inlaid clogs made for women in Turkish and Syrian harems.

The footwear worn for rituals by the Australian aborigines is made of emu feathers and women's hair. These unique shoes from the 19th century are among the most precious in this collection and up to now, could be admired only at the Museum of Shoemaking in Zlín.

The Slovak National Museum is located at Vajanského nábrežie 2, in Bratislava and the exhibition runs until October 30.