No need to see Saw

THERE are few things as frustrating as movies that start off with great promise but ultimately go nowhere. James Wan's directorial debut, Saw, begins quite intriguingly, but soon reveals itself as a by-numbers horror picture that feels haphazardly thrown together by a group of charlatans. 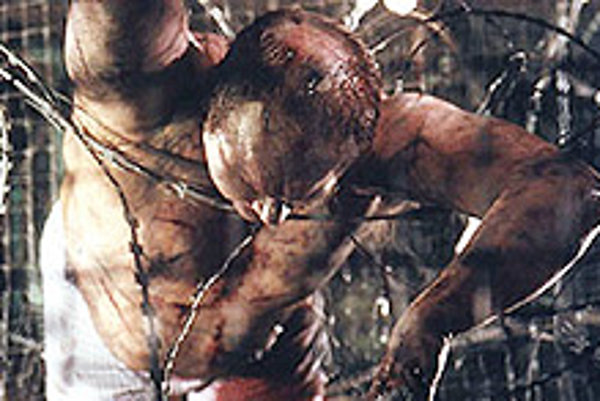 THERE are few things as frustrating as movies that start off with great promise but ultimately go nowhere. James Wan's directorial debut, Saw, begins quite intriguingly, but soon reveals itself as a by-numbers horror picture that feels haphazardly thrown together by a group of charlatans. Even the presence of two proven actors - Danny Glover and Cary Elwes (The Princess Bride) - fails to liven up the proceedings. In fact, they come off no better than anyone else; all in all it feels like amateur hour (and 40 minutes).

But you wouldn't know from the beginning. Two men (Elwes and screenwriter Leigh Wannell) wake up in a cold, dark, and unfamiliar place. After one manages to find a light, they discover they're both chained to pipes at opposite ends of a large, dirty basement. Having never met before, they cautiously make introductions. Elwes plays Dr Lawrence Gordon, a respectable man with a wife and child. Wannell plays Adam, an angst-ridden younger man who wears his suspicion on his sleeve. And no wonder: Between them lies the body of a man who appears to have shot himself in the head.

After some fruitless speculation on how they ended up trapped in this room, Adam and Lawrence each find envelopes in their pockets. Adam's contains a small audio tape that says "Play Me". Lawrence's has an identical tape, as well as a key and a bullet. After they play their tapes, which contain a creepy mechanical voice, they learn that they've been placed here as part of a game - and Lawrence must make a choice: Kill Adam, or else his wife and daughter will be killed.

Things go downhill after Adam discovers a hidden pair of saws, which they use to try cutting through their chains. After this unsuccessful attempt, Lawrence suddenly realizes that they're the latest victims of a serial killer nicknamed Jigsaw, who doesn't murder his victims so much as torture them so that they will either kill themselves or each other. Lawrence knows this because the police initially suspected him of these crimes. And so he tells the story in flashback form. Overused 21st century film techniques (think The Matrix and David Fincher's Seven and Fight Club) quickly enter the picture, thus detracting from the simple but compelling drama located in the seedy basement dungeon. Scenes of gruesome torture and gritty police procedure are rendered using jagged cuts and abrupt camera movements - but they're far too predictable to have the desired effect. Likewise, attempts at giving background and motivation to the characters fall flat, particularly in unconvincing scenes of Lawrence's marital difficulties. As the movie progresses, we learn (big shock) that no one is what they seem. But neither is Saw: At first it seems like a pretty good movie.