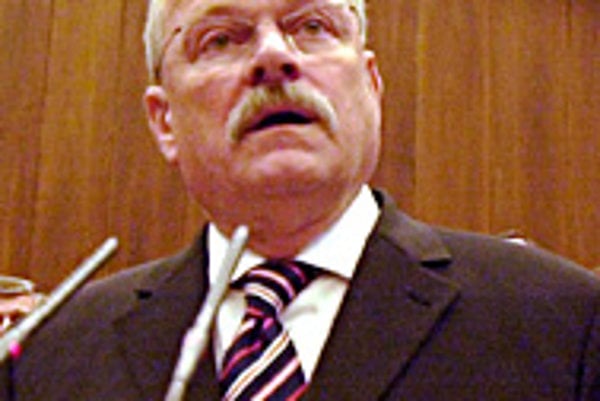 A few opposition parties welcomed the president's address. Smer, which supported the president in last year's presidential elections, welcomed Gašparovič's speech as a "blow to the conceited reformers".

Most opposition parties, however, criticized the address for being one sided and long winded. Hungarian Coalition Party MP Zsolt Komlósy went so far as to call it "the most boring speech that I have ever heard".

Speaking for over an hour on many issues, Gašparovič described Slovakia's new international status as an "accepted and reliable" country, one that is "well established and an increasingly credible partner". The president also praised Slovakia's "matured and ripened" diplomacy. A self-described left-leaning politician, Gašparovič warned of growing economic and social disparities in Slovakia's regions. Bratislava is way ahead of other regions, especially southern, eastern and some northern Slovak districts.

"In several aspects I do agree with the cabinet's activities. It would be unwise to reject reforms," he said in his June 22 speech.

"It could seem that from what I said, everything is great but it is not." Gašparovič continued: "We have to tell the truth about life. A considerable part of Slovakia's inhabitants live just to make ends meet. The real social burden of the individual reforms is at a critical level, in my opinion."

The president said that unemployment remains the country's most serious social problem, calling it "too high" and linking it to the country's regional disparities.

"Unemployment hovers at the 6 percent level in the Bratislava region but spikes up to 30 percent in some regions," he said.

Gašparovič highlighted that "small- and medium-sized companies are now heading to Slovakia" in addition to big investors. He said that cheap labour, above all else, was the main attraction.

"Let's say it openly: They are mainly attracted to Slovakia because of the cheap labour, which is even more advantageous to them than our low [19-percent flat] tax rate," he said.

The president condemned low wages and a growing shadow economy [illegal labour]. He noted that many were leaving Slovakia because of a lack of job opportunities at home.

Speaking about Slovakia's ongoing and extensive healthcare reforms, Gašparovič warned that "healthcare is a vitally important value and must not be turned into an economic entry".

He doubted that a planned introduction of university fees would increase the quality of Slovakia's higher education. He encouraged the government to invest more into science, education and human resources to steer the country towards becoming a knowledge-based economy.

While he said that "Slovakia lacks authorities that stand outside of politics", he admitted that "the positive direction of Slovakia is obvious and encouraging".

As far as reforms are concerned, the president thinks that more time is needed for the effects to manifest.

Members of the opposition Hungarian Coalition Party (SMK) were blunt in their evaluation of Gašparovič's address. MP Komlósy said: "The state of the nation must be very favourable because I never heard such a boring presidential speech in parliament. The only positive thing I can say about the speech is that it was long enough," he told journalists in the halls of parliament.

Smer, on the other hand, was pleased with the speech, as was the Slovak Communist Party and the Free Forum party.

"President Gašparovič made a clear overview of all of the problems that the right-wing parties have produced over the last three years," Smer Chairman Robert Fico said at a special press conference held immediately after the president's speech.

Fico used the opportunity to announce that Smer was prepared to submit a motion for a non-confidence vote in Prime Minister Mikuláš Dzurinda.

Free Forum Chairwoman Zuzana Martináková told the SITA news agency that Gašparovič's speech was a "good report from a caring president" that knows the nation and listens to people's problems.

Vladimír Mečiar, the opposition party boss for the Movement for a Democratic Slovakia, of which Gašparovič used to be a prominent member, stormed out of the parliament hall early in the president's speech.

He told journalists standing in the lobby that Gašparovič "has said nothing, just as he has done [nothing]". Mečiar, who lost to Gašparovič in the 2004 presidential elections, added that the president failed to present realistic proposals to solve the sundry problems he mentioned.

According to political analyst Grigorij Mesežnikov with the Institute for Public Affairs, a Bratislava-based think tank, the president confirmed his non-confrontational nature despite voicing opinions that veered from the current ruling government's right-wing policies.

"The president made it clear that he has a different opinion about how reforms should be done but at the same time he was non-confrontational in his tone," the analyst told The Slovak Spectator June 23.

Despite criticizing the impact of the reforms, said Mesežnikov, the president gave no additional arguments to the opposition, especially Smer, which aims to recall the current cabinet.