Restaurant to take off

After standing empty for two years, the disc at the top of the Nový most bridge has new occupants - ones who plan to steer it to the heavens.
The windows of UFO, the new restaurant and lounge at the top of the bridge, open onto the city and the traffic below like a spaceship's command deck. 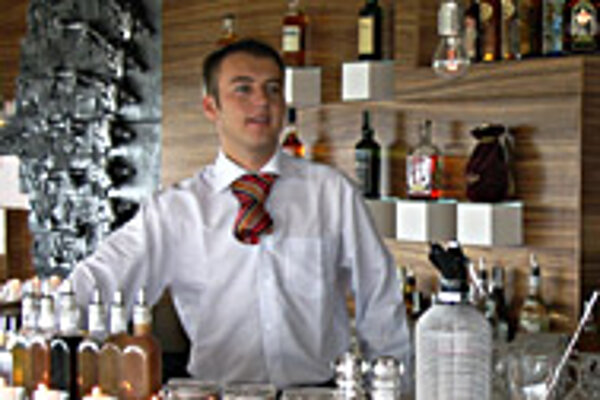 After standing empty for two years, the disc at the top of the Nový most bridge has new occupants - ones who plan to steer it to the heavens.

The windows of UFO, the new restaurant and lounge at the top of the bridge, open onto the city and the traffic below like a spaceship's command deck. Standing before them, the only sensation that ties you to the scene below is a bit of bumping from the bridge traffic. On top of the restaurant, an open-air observation deck offers a full 360-degree view of Bratislava that is certainly the best in the city.

Sitting at eye level with Bratislava castle, diners should enjoy food as good as the view. The kitchen promises to serve quality Mediterranean-Asian cuisine. The menu teases with appetizers like Moroccan lamb filet on a rosemary skewer with a confit of silver-skin onion and eggless almond mayonnaise or watermelon, and coconut salad with arugula, sunflower seeds and Thai dressing.

The main dishes also sound unique. For example, grilled sea bass filet and roasted Thai eggplant with a quenelle of cherry tomato fondue and a spoon of apple sorbet, or cauliflower couscous served over steamed zucchini and carrots accompanied by tofu tempura, wok-sautéed mushrooms and raspberries.

While these give you a detailed look at the style of the outer-space kitchen, the sides for the main courses best demonstrate the culinary fusion. Most dishes come with a choice of Japanese edamame, a European Mediterranean roasted pepper rice pilaf, or Indian naan bread. While the mix of these regions' cusines sounds exciting, the entrees also push the limits, like the kiwi-marinated grilled lamb accompanied by balsamic vinegar ice cream. Hard to imagine? Only a taste will tell.

The owners have also decided to allow visitors the use of their craft to head for higher realms on Saturday nights. From 23:00 to 4:00, UFO becomes a semi-private lounge (though not a dance club) with DJs, sushi plates and extravagant cocktails. Try, for example, Lost in Translation - sake with Cointreau and bitter fruit juices topped with edible flowers - or the bright, fruity Sex Above the City.

Though the doors are open to all on Saturday nights, those who buy membership cards can book a spot in advance. A genteel house rule dictates that men should not approach women they don't know, while women are invited to introduce themselves to men.

The restaurant's new image is the exact opposite of Bystrica, the previous restaurant above the bridge, whose service had a reputation for being slow and rude in the classic communist style.

Retaining the positive side of socialist style, UFO gives ample opportunity to appreciate the bridge, which is a marvel. The asymmetrical suspension design holds the entire span without any pillars towering over the city's old quarter or in the Danube riverbed. The first in the world to use such a solution, it is a testament to the creative trend in architecture pre-1968 as social and political life became more liberal in Czechoslovakia.

The bridge was completed during Communism in 1972, after the Warsaw-pact invasion that ended the liberalization of the 1960s. Pushed out of public life and their seats at the architecture university for their opposition to the invasion, the project's architects did not receive invitations to the opening ceremony nor credit for their work.

In an interview with the Slovak magazine 3/4 revue, Ladislav Kušnír, one of the project's architects, claimed that they first designed the structure at the top of the bridge as a triangle. When they selected a disc as the final shape, it was not a reference to space travel. Good thing these restaurateurs have come along to show us the hidden truth.

UFO's observation deck is open to the public from 10:00 to 22:00 for Sk50 per person. Saturday nights cost Sk150 a person, members and non-members alike.