"DON'T throw anything out. You might be the owner of an icon of Czech design," Tomáš Zykán from CzechMania advised visitors to Bratislava's Techo showroom on June 16. 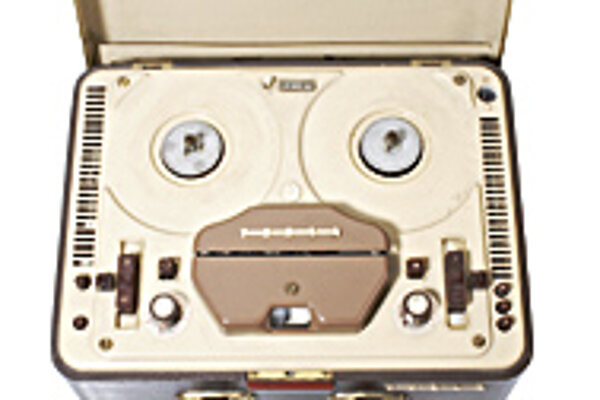 Font size:A-|A+0
"DON'T throw anything out. You might be the owner of an icon of Czech design," Tomáš Zykán from CzechMania advised visitors to Bratislava's Techo showroom on June 16.

To identify what a Czech design icon might look like, a group of Czech designers, curators, dealers and journalists sat down and came up with a top 100. In a humorous, playful approach and with appropriate national pride, they are now presenting their vision to the world.

The Czech 100 Design Icons project maps the Czech lifestyle over the last century. It starts with cult designs that adapted ideas from Cubism and leads us right up to the modern styles of today.

The icons range from the legendary Tatra 77 car (made in 1934) to the new Škoda Roomster, from avant-garde graphic art to contemporary cult magazines, from modernist wooden toys to the Krtek (The Little Mole) cartoon, from the Prague subway to coffee-flavoured Kofila chocolate bars.

Men can admire the large Böhmerland motorcycle and the femme fatales of Czech cinema. Women can gaze upon typical electric cookers and table sets. Young people will find interest in the first reel-to-reel tape recorder

"The Czech 100 is a modern Czech story narrated partially via the artefacts used by Czechs, admired or purchased under-the-counter. They reflect the period they originated in, what the then Czechoslovakia was going through," Zykán said.

He explained that the exhibition was composed as a travelling project so people abroad could get to know Czech design and become familiar with the Czech identity, which is slowly being eroded through globalization.

The exhibition arrived in Bratislava after a successful presentation in Berlin. From here it heads to Stockholm,

"Traditional Czech brands like Tatra, Jawa, or Mladý svět do not exist any more. What we are looking at are historical mementoes," Zykán said, describing one view of the exhibition.

"On the other hand, it is pleasing to see that Czech products have gotten second wind on the European markets. Finally, we can see how globalization wipes away national differences and how the definition of Czech design is gradually being dispersed, making it difficult to trace the national identity."

According to the organizers, each period had its characteristics. The richest was during the 1950s. During the

1960s and 1970s, the years of "planned management", design was practically non-existent. "People would not play when designing chair legs, for example. There was one standard image," Zykán said.

"But there are several nice things and it seems that only now we are beginning to appreciate the beauty of their design."

The look back at history should help gain a better understanding of the present generation of designers, who belong to a new millennium, as well as the confrontation between the old and the new. Maxim Velčovský offers such confrontation in his work, when casting the paper plates of consumer society in fine porcelain forms.

"I've spent half of my life in Communism and the other in capitalism," Velčovský said, explaining the contrast between the memory of luxurious porcelain sets locked in cupboards and a fast food culture with people lunching on baguettes and Chinese soups served in plastic bowls. "This is reminiscence of the past and a

The exhibition also celebrates the 100th anniversary of the Škoda car. Classic and newer models of the car brand parked in front of the Konsepti and Techo showrooms will help visitors to the exhibition navigate through the industrial zone across from Mlynské Nivy bus station.

Once they get there, they should not miss the neighbouring Tower Gallery, which continues in the Czech design theme, introducing progressive contemporary tendencies in Czech Forest exhibition.

Growing the forest of Czech design

THE TOUR through the world of Czech design continues at the Tower Gallery, which adjoins the Techno showroom. Its three-storey industrial atmosphere was a challenge for the exhibition's curators, who tried to create a familiar Czech environment in which to set the progressive trends.

"People are afraid of modern interior design, they consider it to be cold," said Jiří Macek from Profil Media agency. "We wanted to show them not to fear by combining the traditional with the new."

Innovative designs by established artists as well as fresh graduates are displayed within cottage-like elements and on an artificial lawn.

There is glasswork by Bořek Šípek, porcelain sets by Jiří Pelcl and a sun bed called Kurnik Shopa, by Daniela Polubědová and Stanislav Fiala, which is a playful exhibit made from perspex and tennis balls that is named after tennis star Anna Kournikova. Andre Agassi owns the other one of the two existing such sun beds.