Art grows in the diplomatic garden

NORMALLY a diplomat tries to promote the art of his or her land in a host country. Scott Thayer, US charge d'affaires and his artist wife Nena, have been doing just that for more than two years. But this summer, before they leave Bratislava, they decided to do things the other way around. 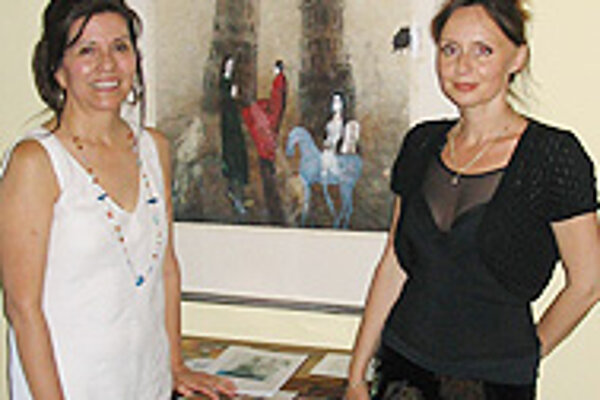 Font size:A-|A+0
NORMALLY a diplomat tries to promote the art of his or her land in a host country. Scott Thayer, US charge d'affaires and his artist wife Nena, have been doing just that for more than two years. But this summer, before they leave Bratislava, they decided to do things the other way around.

Gazing every day at her beautiful garden, Nena for a long time played with the idea of introducing local artists to the foreign visitors who visited their residence.

Now, she has gathered together a collection of Slovak artworks from nine leading Slovak sculptors, painters and graphic artists and is exhibiting 34 of their works in her garden, as well as inside the house.

"For me it's a kick," laughs Scott Thayer. "I don't have to go anywhere - I have a great collection of Slovak art right at my door!"

Until mid-July, the residents of Žižkova 30 will be holding several major events, during which visitors will be able to take a close look at some of the best examples of Slovak art. Those not lucky enough to be invited inside can peer through the transparent gate.

There are paintings and objects by Stano Bubán and Miroslav Cipár, graphic works by Viktor Hulík, drawings and collages by Milan Lukáč and Jozef Jankovič, sculptures by Martin Lettrich, Peter Roller and creative woodcarver Peter Strassner. Katarína Vávrová, a graduate of Albín Brunovský's graphics studio, is the only woman represented.

At the end of the art-in-the-garden experiment, the artists will take their works back, leaving the couple with the artworks they already own. "My wife temporarily expanded our personal collection," smiles Scott Thayer, who has also brought American art to Slovakia.

US artist Kristina Arnold is one of 50 participating in the Sculpture and Object project organized by Viktor Hulík within the Bratislava Summer of Culture.

"I am interested in disease processes, how people get sick, what diseases physically look like," says Arnold, who, prior to art, studied public health and biology. To see what she is talking about, enter the basement of the Bratislava City Gallery, which is filled with plexiglas bubbles hanging in clusters with strings spread out in-between them.

"The work is called The Sugar Pill and it illustrates how our medical system swallows you up, the plastickness of the way we deal with disease - we do plastic surgery; everybody takes drugs to feel better. As a viewer going through, you try to navigate this huge complex hell-like body, and everybody is just giving you a 'sugar pill', a placebo," says Arnold.