VISITORS to Bratislava castle can see a replica of a Caproni Ca-33, the plane in which General Milan Rastislav Štefánik crashed in 1919. The replica is part of the newly installed exhibition, which presents the little known photographs of the significant politician, diplomat and astronomer. 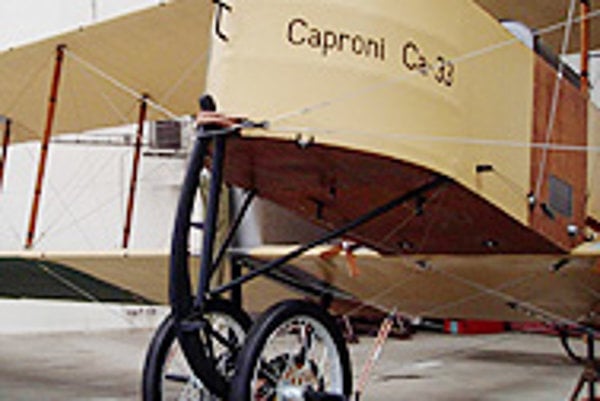 Font size:A-|A+0
VISITORS to Bratislava castle can see a replica of a Caproni Ca-33, the plane in which General Milan Rastislav Štefánik crashed in 1919. The replica is part of the newly installed exhibition, which presents the little known photographs of the significant politician, diplomat and astronomer.

The project is a tribute to the "Little big man" of modern Slovak history, who is best known to the general public from street names and history textbooks, as well as Bratislava airport, which bears his name.

Few know that Štefánik was also interested in art. The exhibition aims to highlight this fact and introduces him as a photographer for the first time.

Štefánik recorded his travels around the world in hundreds of photographs, 400 of which have been preserved. Around 100 are displayed at the exhibition. Visitors can admire Štefánik's photographic skills and technique, which for their time were very advanced. They will find pictures of unspoilt nature as well as portraits of ordinary people from various parts of the world at the beginning of the 20th century.

One photo is a nude of a young Tahitian woman from 1910, the first nude photograph ever taken in then Czechoslovakia that is still admired by experts today. The photographs are supported by original exotic artifacts that Štefánik brought back with him from his travels, as well as personal belongings such as his travelling case and cameras.

At the exhibition's opening on June 29, the ambassadors of France, Italy and the Czech Republic presented the three-language book (in Slovak, English and French) of the exhibition, entitled Obrazopis sveta - Objektívom Milana Rastislava Štefánika (Picture-description of the World - Through the Lenses of Milan Rastislav Štefánik).

The exhibition's biggest attraction is undoubtedly the replica of the Caproni airplane, which has a wingspan of more than 22 metres. It was made in Trenčín's Letecké opravovne (Aviation Repairs).

Exhibited after almost 10 years of preparations, the plane is not only a reminder of Štefánik but also of the beginnings of aviation development. The re-created 1916 plane is a testament to the skills of the early aircraft technicians and the courage of the pilots who flew these fragile-looking machines.

The exhibition runs at the Western Terrace of Bratislava castle until September 30.