AFTER three years of negative population trends, Slovakia experienced a natural growth in population in 2004, when more babies were born than people died. 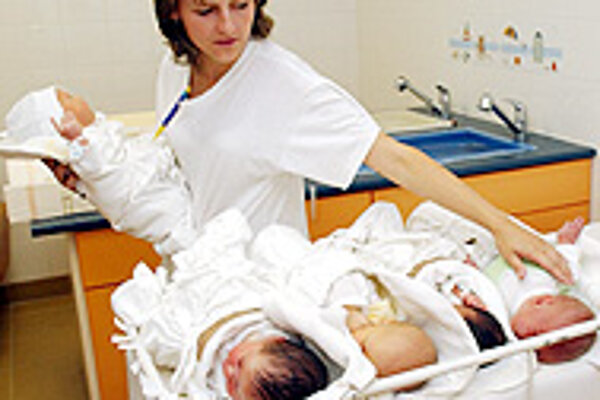 Font size:A-|A+0
AFTER three years of negative population trends, Slovakia experienced a natural growth in population in 2004, when more babies were born than people died.

The Statistics Office confirmed this demographic development and reported that for the first time in Slovak history, the life expectancy of men reached 70.

Other data published by the Statistics Office give reason for optimism too: the number of abortions decreased, more people came to live in Slovakia than left, and there were more marriages.

On the other hand, the divorce rate is rising and the trend towards an ageing population is continuing.

Sociologists say the reason stems from a change in the reproductive pattern of people now in their 30s.

"They did not connect the start of their independent life with marriage and parenthood," Zuzana Kusá, sociologist with the Institute of Sociology at the Slovak Science Academy, told The Slovak Spectator.

Sociologist Ján Bunčák, the head of Sociology at Comenius University, said: "Until the beginning of the 1990s, the basis for the reproduction pattern in Slovakia was the low age at which people decided to get married. People got married very young.

Brides were about 19. Childbirth out of wedlock was an exception. After 1989 [Velvet Revolution] the thinking about family and kids started to change quickly - it is more similar now to Western Europe.

Kusá explained that there were three important milestones in childbirth in Slovakia (and the former Czechoslovakia) after the Second World War.

The first was a population explosion in the 1950s when about 100,000 babies were born annually. It stopped in 1959 due to increased abortions. During the 1960s fewer than 90,000 children were born each year.

In the 1970s, people born in the 1950s started to get married and there was another population explosion, with the number of births again reaching 100,000 per year. The birth rate was given extra stimulation by the policy on the family at that time - advantageous state loans for young families, massive apartment construction, and the establishment of kindergartens.

There was a big surprise after another 20 years, in the 1990s. Although there were a lot of people in their 20s, there was no accompanying population explosion.

This post-revolution period brought economic recession, which stopped apartment construction and impacted on the number of marriages and births.

People born in the 1970s are getting married and having children later.

"We can consider the mild increase in the natural population growth in 2004 [over 1,800 babies more than the number of deaths] as a realization of the postponed parenthood of people currently in their 30s who are starting to succumb to the ticking biological clock. It is also proven by the higher average age of mothers having their first baby," Kusá explained.

The age of women giving birth to their first baby was slightly over 25 in 2004, compared to 2000 when it was slightly less than 24.

In 2004 there were 27,885 marriages, which is 1,883 more than the previous year: the third year running in which marriages have increased.

However, more and more people no longer see marriage as a prerequisite for having children. While in the 1990s the share of babies born out of wedlock stood at four to five percent, in 2004 it was up to 25 percent.

The long-term tendency of a rising number of divorces has not changed. The number of divorces in Slovakia was 10,889, an increase of 173 on 2003. Fifty-eight percent of divorced couples cite incompatibility of character as the main reason to separate: other major reasons include infidelity and alcoholism.

Life expectancy, the average number of years a newborn would be expected to live if healthy and if living conditions at the time of birth remain the same throughout its life, reached 70 for Slovak men in 2004, the highest in Slovak history. Women do better than men though, with a life expectancy of 78.

Kusá of the Slovak Science Academy said: "We, in Slovakia, still smoke and drink a lot. We do not eat enough vegetables: we do not rest properly, and we do not use our days off for actually having a holiday but for work.

There are also problems with transportation and safety at work, among other things."

Sociologists envisage that the natural population growth will continue although they do not expect it to in any large numbers.

Kusá pointed out that it is difficult to make estimates. She said that many people between the ages of 25 and 33 are not yet becoming parents.

"We can suppose that they have not refused the role of parents: only postponed it until they are financially stable.

The question is, whether their conditions will allow them to have more than one baby. If this generation pursues a one-child pattern, we actually could start talking about a demographic crisis and the dying out of Slovakia," Kusá said.

However, analysts note that migration will play a more and more important role in the development of the population. In 2004, 4,460 people immigrated into Slovakia and only 1,586 people emigrated.