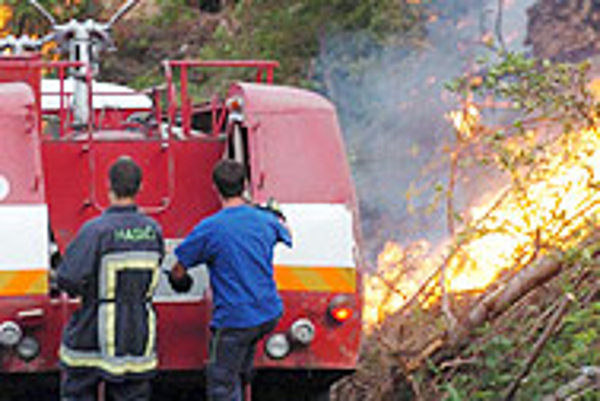 So far this summer 10 fires have broken out in the Tatras, mainly in areas affected by the windstorm. The dry branches left by fallen trees are highly flammable and easily set alight.

The fire in the Low Tatras spread over 50 hectares of forest, most of it damaged by the November storm. The fire in the High Tatras covered only five hectares.

All the experts agree that effective fire fighting and prevention measures are desperately needed. However, professional opinion varies when it comes to deciding exactly what measures should be taken and to what extent.

The biggest concerns were raised at the beginning of June when Štátne lesy TANAP (State Forests of the High Tatras National Park) started to put in place some fire fighting measures in Tichá and Kôprová dolina valleys, which are under the highest level of environmental protection.

Nature conservationists were shocked when heavy machinery was used to create a corridor about 20 metres wide in those parts of the valleys affected by the windstorm. Despite the fact that the valleys were to be left untouched to preserve the precious biosphere that survived the windstorm, Štátne lesy went ahead with the clearance.

"I still think it is an international scandal," Mikuláš Huba, from the environmental NGO Naše Tatry (Our Tatras) told The Slovak Spectator.

Štátne lesy defended their action. They said they only did what they were told by the Slovak Fire Brigade. The corridor should provide easier access for firefighters to tackle any eventual blaze.

Huba from Naše Tatry stressed that he thinks clearing an area hit by the storm in the way that Štátne lesy has done actually increases the risk of fires spreading.

"They are clearing by taking out large tree trunks but they are leaving behind small and dry tree branches," he said.

Juraj Lukáč from the forest protection NGO, Wolf, explained: "It is never easy to light a fire among tree trunks. But if you come to a place that is all covered with tiny branches, you can light a cigarette, and suddenly, the area is all in flames."

The action of Štátne lesy surprised even the High Tatras administration body, Správa TANAP-u, a state authority mainly focussed on the protection of nature (while Štátne lesy is aimed at wood management). Správa also expressed concerns about endangering valuable biosphere in the valleys.

Currently, the whole case is still under investigation by the district prosecutor's office in Poprad and the Environment Ministry.

The institutions apparently followed various regulations and did not coordinate their activities or exchange information with one another.

"The thing is that there is great disharmony in regulations. Štátne lesy has some regulations for removing the storm debris (fallen trees); firefighters and the state nature protection body have their regulations. It should be the role of the Governmental Committee for Tatra Revitalization to gradually remove this disharmony, but so far it has not been very successful," Huba said.

A recent agreement on fire prevention and fighting measures adopted by the Governmental Committee for Tatra Revitalisation (established shortly after the November windstorm) could be the first sign of deeper cooperation among the institutions.

The Technical University in Zvolen, which specializes in forestry, worked out new regulations. The Environment Ministry, the Agriculture Ministry, Štátne lesy TANAP, Správa TANAP-u, as well as the Slovak Fire Brigade, all agreed on the measures.

"This could help avoid such a dispute as is the case with the Tichá and Kôprová valleys," Ivan Štefanec, secretary of the governmental committee, told The Slovak Spectator.

The anti-fire plan is based on the idea of dividing the territory into smaller areas - forest corridors so that fire engines can easily get to the fires.

The plan also determines what measures will be adopted, how many people, machines and where they would come from to fight a fire in any given area, as well as how they would get connected to water sources.

However, some environmental organizations say the situation is not solved. The new plan does not introduce any new ideas and repeats the same old mistakes.

"The measures apply to a situation when a fire has already broken out. There is no fire prevention. Experience has shown that there is less likelihood of fire in areas where debris left by the calamity has not been cleared away.

"According to our statistics, all the recent fires, apart from one, broke out in areas where the calamity was cleared, because of little dry branches. It would also be worth introducing a blanket ban on lighting fires, even for foresters. The new project proposes things like where to build roads and how to divide territories. It makes no sense," Wolf's Lukáč said.