BRUSSELS is becoming more involved in the recovery of Slovakia's Tatra mountains, which suffered severe damage in last November's windstorm. Apart from providing financial help to partially cover the damages, the EU wants to know whether the clean up operation is endangering the precious biosphere of the mountains, some places of which are proposed as Natura 2000 sites. 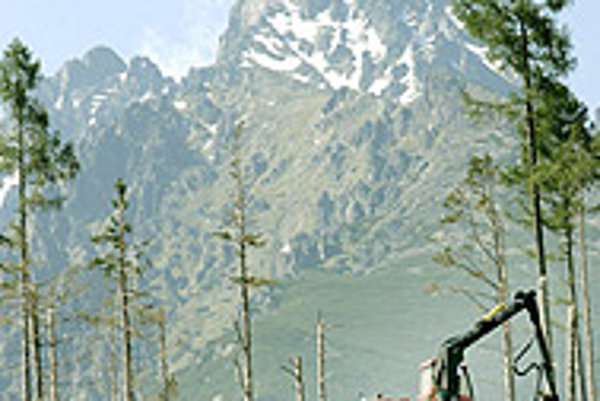 Font size:A-|A+0
BRUSSELS is becoming more involved in the recovery of Slovakia's Tatra mountains, which suffered severe damage in last November's windstorm. Apart from providing financial help to partially cover the damages, the EU wants to know whether the clean up operation is endangering the precious biosphere of the mountains, some places of which are proposed as Natura 2000 sites.

On November 19, the windstorm destroyed a 2.5 kilometre-wide by 50 kilometre-long strip of forest, an area of 12,000 hectares. The natural disaster hit not only the High Tatras but also other regions, including the Low Tatras and Orava.

It is believed that one of the reasons for the catastrophe is that only spruce trees have been planted in this region since 1937, following a similar calamity, as well as climatic changes. Spruce trees were chosen because they grow quickly, but they have shallow roots, which means they are vulnerable to extreme weather.

As the volume of damage exceeded 0.6 percent of Slovakia's gross national product, the storm qualifies in the EU as a major disaster. This meant that Slovakia was eligible to ask for assistance from the EU Solidarity Fund.

Following a government request in January 2005, the European Commission (EC) has proposed €5.67 million to help with the costs. The EC estimated total costs of emergency operations in the Tatras at almost €28 million.

According to Ivan Štefanec, secretary of the Governmental Committee for Tatra Revitalisation, Slovakia could get the money after going through the EU approval process, which should be sometime in September this year.

At the EU's request the governmental committee has already decided how it will use the European funds: "About 42 percent will be used for infrastructure reconstruction, one-third of the money will go to rescue operations, and the rest will be used for clearing works in the stricken area," Štefanec told The Slovak Spectator.

Exactly to which organizations the money will be allocated for spending will be decided by an inter-departmental commission and then by the Governmental Committee for Tatra Revitalisation. The Slovak government will have the final word on just where the money will go.

"The proposal only confirmed my impression about the whole situation concerning the Tatras. The protection of nature is not mentioned. The priorities are different - infrastructure, removal of the calamity, but, for example, the need to change the way the national park is managed is not mentioned there," Mikuláš Huba from the environmental NGO Naše Tatry (Our Tatras) told The Slovak Spectator.

The Tatras are considered a national treasure in Slovakia. That is why revitalization and the removal of damage arouses such passions. Each interest group has particular priorities.

Forest management groups would like to clear the areas of fallen trees as quickly as possible, while those interested in tourism development are pointing out that the last time the Tatras received investment was in the 1970s. Then there are the environmentalists who prefer not to intervene and to leave nature to overcome the calamity alone.

The argument about how to proceed with the Tatras was stirred up even more by the application of some firefighting measures in the Tichá and Kôprová valleys in the High Tatras: areas that are under very strict environmental protection (see page 6).

Some Slovak and also foreign environmental organizations were so concerned that they asked Brussels to reconsider the financial help for the Tatras from the Solidarity Fund while it is unclear what the money will be used for. They are worried that the money would go towards the economic exploitation of the wood and artificial revitalization of the forest.

However, according to Ladislav Miček from the Slovak mission to Brussels, it was a needless fuss caused by a misunderstanding, since the Solidarity Fund can only be used for rescue operations and clearance works.

As a protest against the action in the Tichá and Kôprová dolina valleys, a civic organization called "Tatry" stated that they are prepared to call for an international tourism boycott in the High Tatras, which utterly shocked representatives of the town of Vysoké Tatry.

However, representatives of other environmental groups and forestry organizations published a public letter to express their support for the current revitalization work in the Tatras.

"We are disappointed and disillusioned that the period after November 19 has been marked by shallow and unreasonable campaigns against foresters, NGOs and institutions that are trying to help the Tatras in their revitalisation...

"We are turning to the public so that it will not let itself be fooled by a couple of environmental organizations stating that it is best to leave Tatras to develop themselves. Man is part of an ecological chain and that is why he is obliged to cooperate with nature to protect our unique heritage in the High Tatras. Leaving devastated forest eco-systems to self-development means a continuation of their devastation with risks of fires, floods, droughts and the calamity of under-bark insects," reads the letter.

Finally, some other environmental groups initiated a letter from the Directorate General (DG) for Environment of the EC to the Slovak Environment Ministry in June. The DG inquired whether Slovak institutions were hurting the precious biosphere while clearing the storm damage.

"The Directorate General for Environment of the EC has recently received a number of alarming communications regarding the manner in which the forest work is undertaken in the area of the proposed Natura 2000 sites Tatra mountains and Muránska planina following the wind calamity of the autumn 2004," reads the letter.

It continues: "The Commission intends to formally register those communications as complaints. Please, notice that formal correspondence will follow shortly, requesting clarification on how Slovak authorities will ensure that conservation objectives of the Habitats Directive are respected in the process of planning and execution of forestry operations in the proposed Natura 2000 affected by the 2004 calamity".

The DG for environment emphasized that it fully understands that the current forestry work has to be carried out because of the possible fire hazards and other forest management concerns.

"However, given that the wood removal activities may be disturbing to priority species [such as] large carnivores, including priority habitats, this is a matter of particular urgency and we would appreciate a prompt reaction on the state of play regarding the above mentioned forestry operations," the DG pointed out in the letter.

Štefanec from the Governmental Committee for Tatras Revitalisation told the Spectator he does not see why the EC sent the letter.

"The letter basically means we should stick to the legislation in our actions. So far, the EU did not oppose any actions by Slovak institutions. There were some suspicions but they were not confirmed," Štefanec said.