ON JULY 11, the world marks the 10th anniversary of the 1995 massacre in Srebrenica, eastern Bosnia, which claimed the lives of more than 7,000 Bosnian Muslims.
"Our house was bombarded and I survived under the ruins. I was born a second time, and I am still alive," 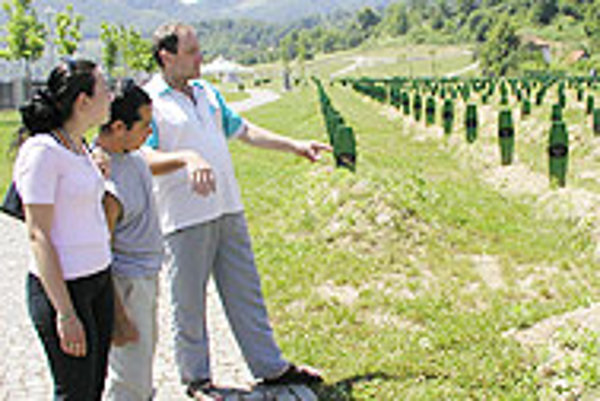 Font size:A-|A+0
ON JULY 11, the world marks the 10th anniversary of the 1995 massacre in Srebrenica, eastern Bosnia, which claimed the lives of more than 7,000 Bosnian Muslims.

"Our house was bombarded and I survived under the ruins. I was born a second time, and I am still alive," Merischa Sejdić says, recalling the most important, and most tragic, time of her life.

We are standing together at a cemetery in Srebrenica, in Bosnia-Herzegovina (just 10 miles from the Serbian border), where the majority of the Muslim boys and men slaughtered in the massacre are buried.

In July 1995, Bosnian Serb military units herded Muslims into a local factory. Women and boys up to 12 years old were taken away on buses. Men and boys aged 12 and over were transported on trucks and shot and buried in mass graves.

Beginning of life, echoes of war

Merischa does not live in Srebrenica. "We come here at least twice every year from our village, Breza, near Sarajevo. My father, who was a miner, attended high school here. Six of his classmates are buried at the cemetery," said the young economist, who talks about how she wants to have children and how hopeful she is for the future.

However, Colonel Marián Áč, a Slovak analyst at the Sarajevo centre of the EU Monitoring Mission (EUMM) reports some disturbing recent events.

"In Glamać, a Greek Orthodox priest was verbally attacked. In Priedora someone intentionally set the house of a local Muslim on fire. At the military oath of the prevailingly Croatian Caplijina, where they also played the Croatian state anthem, approximately 400 Bosnian-Serb recruits refused to take the oath. In Lipije, another mass grave was discovered with 240 victims. In Sarajevo, they had to empty a hotel due to a bomb alarm," Colonel Áč said.

Despite incidents such as these, Áč explains that things are improving each day.

"Certainly, if representatives of different ethnic groups meet at a football match, the atmosphere is really tense. As long as the heated atmosphere is kept in the stadium, that is not such a problem. A more complicated issue is landmines. There were around a million landmines left after the war, and clearing them will take approximately seven decades," Áč says.

A similar situation also prevails regarding arms, according to Áč.

Lieutenant-Colonel Marián Hanis of the NATO command centre is responsible for the system of weapons and munitions registration at the storage depots of the armed forces of Bosnia and Herzegovina. The experienced officer, who has already served at the UNAMSIL mission in Sierra Leone says that the system of arms registration was modified in March.

"While before, soldiers of the multinational mission used to check the munitions storages of the local armed forces, with the increasing trust and stability we have switched to national verification checks," Hanis said.

However, Hanis warns that there are still many arms in the hands of civilians. This is why EUFOR units are continuing with Operation Harvest, which aims to gather in weapons in regions inhabited by Bosnian Muslims, Serbs and Croats.

From last December to May this year, 3,744 handguns, 1,587 grenades, 432 mines and 777 kilogrammes of explosives have been collected from civilians.

Continuing humanitarian aid is of increasing importance. It flows into all parts of the country and shelters all the ethnic groups, says Lieutenant-Colonel Ján Buda, head of the Slovak contingent. He is serving in Bosnia-Herzegovina for the second time.

"From 2001-2002, I worked on the staff of the northern multinational unit in Tuzla, and I was in charge of distributing the aid to the refugees. Among other things we mediated contacts for a large number of humanitarian organizations that joined the renewal projects," Buda explains.

"I led a transport of 32 trucks to the village of Zelovja, which in fact was erased from the map. The trucks transported 32 Serbian families who were returning home. Finnish humanitarian organizations built the houses, which had been burned to the ground. Recently I visited them, and it was a beautiful meeting," said Hanis.

Missing without a trace

Seventy-one-year-old Suhra Malić, Merisha's mother, is hoping for two similar crosses for her two sons, Suad and Fuad. They were both taken away during the tragic happenings of 1995, and there has been no trace of them since. She has accepted the fact that they are probably not alive.

"Look, these are our three houses. In the centre is mine and my husband Hasan's. To the left was one of my son's with his family and to the right my other son. He also had a wife and child," she explains.

Her grandchildren live near Sarajevo where they were hiding during the war. They do not want to return home. Not yet. However, families of the Serbian refugees who used their houses returned home a year ago. The families belonged to the 1.6 million people who were on the run as a consequence of the war between the ethnic Serbs, Croatians and Muslims.

"Maybe they will return once the bodies of my sons are found and we will be able to bury them," says Suhra Malić.

Her husband, Hasan points at another mass grave that has just been opened, and to a further one, still covered by grass. There might be around 400 victims buried there.

Hasan Malić still does not know whether he will find his sons, for whom his wish is a dignified burial in Srebrenica cemetery.