Východná needs to reach out

SLOVAKIA is a country with hugely diverse folklore traditions. The many variants scattered around particular regions are pieced together annually at Slovakia's largest folk festival, Východná. The culminating programmes are astounding mosaics of dynamic dances, tuneful songs, and richly embroidered costumes. 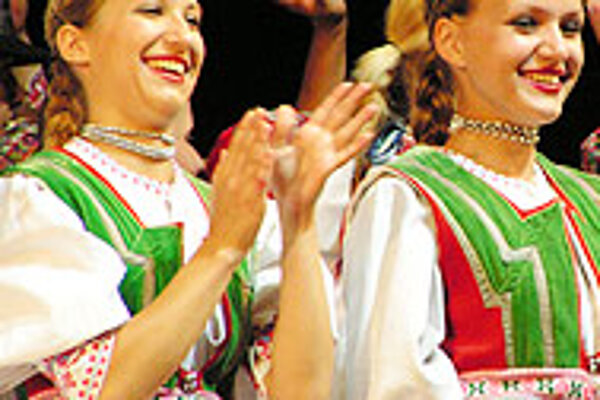 Font size:A-|A+0
SLOVAKIA is a country with hugely diverse folklore traditions. The many variants scattered around particular regions are pieced together annually at Slovakia's largest folk festival, Východná. The culminating programmes are astounding mosaics of dynamic dances, tuneful songs, and richly embroidered costumes.

After last year's jubilee celebration, the programme of the 51st Východná did not seem to promise much. Surprisingly, principal acts such as Lúčnica and the Slovak Folk Art Ensemble (SĽUK) were missing, and no other headliner would attract newcomers to the festival.

But those who trusted the organizers' many years of experience and came anyhow from July 1 to 3, did not regret it.

The flamboyant Wedding from the Abov Region, performed by nearly 200 participants from Košice folk ensembles on Sunday night, shone with young beauty and nostalgia for fading traditions. A children's joyful "train" carried the visitors through the customs of all Slovakia. Sunday's culminating gala programme was a wheel of energy and splendour highlighted by dynamic drumbeats from Bosnia-Herzegovina and vibrant stomps by Bratislava's Dragúni.

The festival's participants also held smaller cultural programmes all through the venue's open-air area. Amateur as well as professional musicians freely entertained the visitors, particularly near the stands offering food and drink specialities. Horse carriages with musicians, shows, and parades held across the surrounding region kept inviting visitors to return to the festival's amphitheatre venue. And the entire village of Východná continued the festive atmosphere by decorating their courtyards, displaying traditional costumes in windows, and hanging banners with Slovak sayings on their fences.

According to the festival's spokesperson, Ján Bazovský, large and better-known ensembles were missing from

this year's programme because those groups did not put enough effort into upgrading their repertoires.

"Lúčnica and SĽUK had been arriving with old programmes, already known by many," said Bazovský. "Východná is the first lady among folk festivals in Slovakia and offers space for presentation to ensembles from around the country, as well as to guests from abroad. The younger, lesser-known groups usually bring new, fresh programmes."

During last year's 50th anniversary, Lúčnica un-wrapped their years' old Karpaty programme, and SĽUK arrived with their controversial Circus World show directed by Ján Ďurovčík; they had toured the country with it before.

The grandiose, tailor-made projects might astonish some on second or even third viewing. But a fresh medley composed of quality acts performed by several, local ensembles would appeal to most. Moreover, it proves that folk traditions still live in people's minds.

The Východná organizers are well aware of it. Year by year, the event astounds thousands of visitors with attention-arresting results delivered on its open-air stage.

Despite the success, though, the organizers should not rest on their laurels, assuming everybody knows both the festival and Slovakia's rich folk traditions. They need to promote it even more loudly abroad as globalization mutes the national differences individual countries proudly cherish. And especially after they received a grant from the European Union for reconstructing the venue's amphitheatre, which should be finished in two-year's time, permitting room for an even larger audience.

Text and photos by Zuzana Habšudová