IN THE AFTERMATH of the July 7 terrorist attacks in London, Slovakia has condemned the acts and its leaders say they will support initiatives from the international community to better combat terrorism. 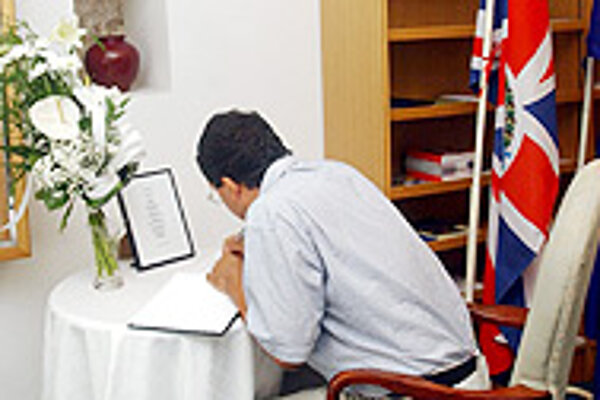 Font size:A-|A+0
IN THE AFTERMATH of the July 7 terrorist attacks in London, Slovakia has condemned the acts and its leaders say they will support initiatives from the international community to better combat terrorism.

Top Slovak officials, including President Ivan Gašparovič, Prime Minister Mikuláš Dzurinda, and Speaker of Parliament Pavol Hrušovský have signed the book of condolence for the victims of the attacks at the British Embassy in Bratislava. Ordinary Slovaks also came to the embassy to express their deepest sympathies.

"Slovakia will back any measure that will help defeat international terrorism," said PM Dzurinda on his visit to the British embassy in Bratislava on July 11.

"We must show our clear and firm resolve, by denouncing all such acts and not allowing the slightest opportunity [for terrorists] to think that we would ease up on our battle against these foolish people," he said.

Dzurinda added that the terrorist attacks bring the EU states together and that "human tragedy has always brought people closer together".

Slovak Foreign Affairs Ministry spokesman Juraj Tomaga, told The Slovak Spectator on July 13 that the ministry had no information that Slovaks were among the dead or injured victims of the blasts.

"However, we are in constant contact with the British authorities," Tomaga said.

European leaders and top representatives have also reacted to the London drama.

On July 13, the EU's justice and interior affairs ministers were scheduled to pass a Declaration of the Council of Ministers Against Terrorism. The contents of the document were conceived in direct response to the London terrorist atrocities, the Slovak Interior Ministry informed The Slovak Spectator in a statement.

The declaration denounces the terrorist attacks and sets the ground for the EU's priorities in fighting terrorism.

Based on the declaration, EU states would pledge to increase their efforts to track down terrorists and cut the terror cells' funding sources, as well as break down their support networks.

Slovak Interior Minister Vladimír Palko expressed his outrage at the bombing. "I unequivocally condemn the barbarian terrorist attacks in London. It was an attack against our ally, Great Britain, a NATO member state and current chair of the EU," he said.

Immediately after the attacks in the morning rush hour on July 7 in London, Palko expressed his personal regrets and sent his condolences to all victims of the terrorist acts and to the people of Great Britain.

Palko also said he was sure that, according to existing intelligence, Slovakia was not under threat of a similar attack.

A survey carried out by the Markant agency for the SME daily, and which was published four days after the London attacks, also showed that Slovaks consider it unlikely that their country would ever become a terrorist target.

Fifty-two percent of respondents said they were convinced that terrorists would never attack Slovakia. Nevertheless, 42 percent said they expected another terrorist attack to take place somewhere in the EU within one year.

The survey also showed that 40 percent of Slovaks believe that the aggressive policies of some western states are behind the terrorist attacks, while 38 percent say it is a result of religious and ideological fanaticism.

Slovak officials meanwhile continued to assert that the country was ready to support and join all international community efforts to fight terrorism.

"The Slovak Republic considers the terrorist attacks and the barbaric methods [used by terrorists] a threat to society's democratic values and the essence of democracy as such. We therefore support all steps approved by the international community related to fighting terrorism," said Slovak Justice Minister Daniel Lipšic, who also participated at the July 13 meeting of justice and interior ministers in Brussels.