SEVERAL Slovak political parties launched special summer tours across the country, ostensibly to communicate with ordinary people, an aspect of political life many Slovaks feel is neglected except prior to parliamentary elections. 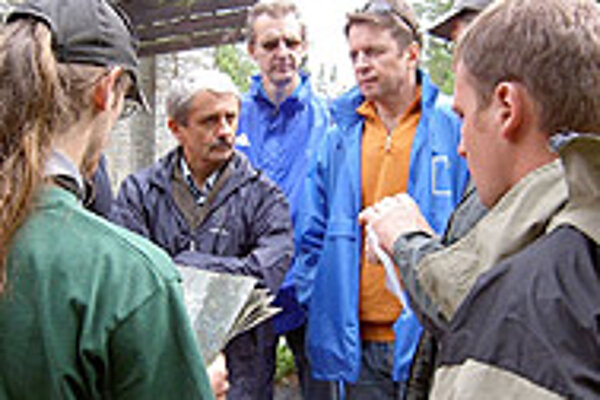 Font size:A-|A+0
SEVERAL Slovak political parties launched special summer tours across the country, ostensibly to communicate with ordinary people, an aspect of political life many Slovaks feel is neglected except prior to parliamentary elections.

The ruling Slovak Democratic and Christian Union (SDKÚ) of Prime Minister Mikuláš Dzurinda launched its Blue Summer campaign to tour Slovak towns and villages. The liberal New Citizen's Alliance (ANO) started its "Modern summer" campaign, which consists of promoting issues that the party want to address and also a tour of ANO offices across Slovakia.

The opposition Movement for a Democratic Slovakia (HZDS) has also started its summer programme, with officials planning to visit various cultural and social events in the country in an attempt to get closer to the people.

Other political parties say they do not have any special campaigns planned, claiming they are in touch with the regions on a regular basis and do not need to organize anything special to maintain contact with the voters.

"We will not have anything of the sort our coalition partners the SDKÚ and the ANO have planned. We are in a campaign for the whole four years [the length of an election term in Slovakia]. We go to the regions and are present around the country non-stop," Gyula Bárdos, the head of the ruling Hungarian Coalition Party told The Slovak Spectator.

"The KDH is always in the regions, always in touch with the public. Our MPs make regular trips to the regions; we have always made sure of regular contact. KDH officials meet with the people and do not need to call this regular contact by any special name, " Anna Andrejuvová, the KDH's spokeswoman, told The Slovak Spectator.

The ANO and the SDKÚ, however, began their summer programmes with some publicity.

Following a party meeting in Poprad the SDKÚ symbolically baptized its touring vehicle "The Blue Bus" by dousing it in spring water from the Tatras.

"We want to listen to the people. We are starting a two-month trip around Slovakia today," said PM Dzurinda on July 2.

At the Poprad meeting the party's top representatives discussed what they called the "fine-tuning" of Slovakia's reforms, an idea the SDKÚ plans to focus on in the coming months. With national elections just over a year away, the party plans to discuss with people how the reforms could be improved so that Slovaks can really reap their fruits and understand their meaning.

"We want people to understand what the reforms really mean: that there is more, better paid work in Slovakia and that life is better," Dzurinda said, according to the TASR news agency. He added that this pre-election year will be used for the "approval process of our Slovak house".

Over seven weekends the PM said he and his team plan to visit all parts of Slovakia so the SDKÚ has a clear idea of what needs to be fine-tuned in the country's reforms so that "it not only looks good on paper, that is in the macro-economic indicators and data, but also that the people perceive the reforms in a positive way".

The ANO has divided its campaign into two parts. Apart from travelling around Slovakia and meeting people, the party wants to open up for discussion several topics that it considers crucial for a modern Slovakia.

The Modern Summer campaign's topics include more investment, more new jobs, improving healthcare services, the Internet in Slovakia, and the financing of churches in Slovakia.

According to the ANO chairman Pavol Rusko "reforms are opportunities, and investment projects and investors are goals".

"However, the result of the match is not dependent on the number of opportunities, but on the goals scored," he added.

He also thinks that Slovakia's reforms are not perfect and need some improving.

"In no country in the world are there cabinet ministers who adopt principal reforms with a single piece of legislation. It is a longer-term process, but starting it is very important. We need to give it the right direction, and gain people's support for the changes," he said at a July 4 press conference.

ANO officials, including the chairman, have also pledged to work on their fitness during the summer, with plans to climb Kriváň Mountain in August. Rusko also said he would ride his bike 20 kilometres from home to work every day during the first week of September if he fails to lose five kilos during the summer.

"We must be strict with ourselves and prove that we do not just talk and tell others to do things," said Rusko.

Some, however, view the summer campaigns as more than just a consultative exercise. Boris Zala, from the opposition Smer party told The Slovak Spectator they were the "start of the election campaign one year before the elections".

"We keep regular contact with the voters. Each MP has his specific region that he or she has to visit and meet people regularly. We don't need to go to people like this and explain the miscarried reforms or convince people that these are for their good when in fact the people feel that they are not," he added.

The Slovak Communist Party was not planning to go out on a special tour either.

"We have no buses and will not be conducting any election campaigns this summer, except later for the regional elections [to be held in November]," the party's general secretary Ladislav Jača told The Slovak Spectator.

The opposition HZDS, however, was ready for a "busy summer programme".

"We started our summer activities on July 10 with a climb up Devín Castle hill where we also met with people. Then we took a boat down the Danube River to Gabčíkovo and discussed the strategy for the coming weeks," said Milan Urbáni, HZDS deputy chairman.

"The HZDS will not fall into a summer lethargy," he added.