THE AQUAPARK boom in Slovakia continues. The fourth aquapark in the country will open at the end of July in Bratislava. 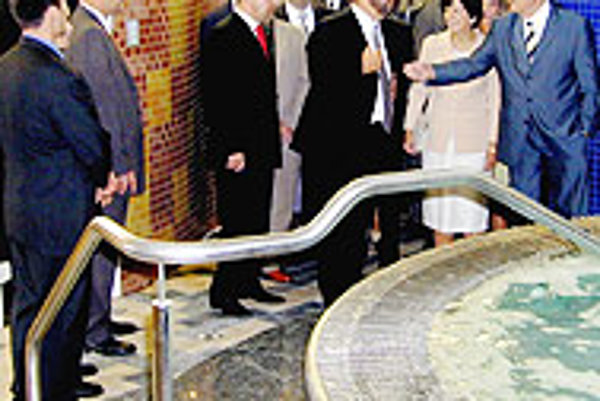 Font size:A-|A+0
THE AQUAPARK boom in Slovakia continues. The fourth aquapark in the country will open at the end of July in Bratislava.

And what is more, current aquapark managers say the market is there for even more new centres.

The first aquapark in Slovakia, Tatralandia in Liptovský Mikuláš, was opened in July 2003. A year later saw the opening of Slovakia's second such park - AquaCity in Poprad. Also in 2004, in August, the third park, Aquathermal, was established in Senec, near Bratislava.

All three parks use thermal water sources, saving on energy and operational costs.

Now, a new aquapark is set to open in the Slovak capital itself. Bratislava's Aupark shopping centre will house the Aulandia Aqua & Spa Paradise and should welcome its first visitors on July 23, 2005.

The investment needed for such a venture runs into millions of crowns, but aquaparks are an attractive proposition because people can visit throughout the year, come rain or shine.

"Aquaparks with thermal water have a guarantee of whole-year operation and they ideally complement ski resorts in winter. And if there is bad weather in summer they can serve tourists. From this point of view, this is a very attractive business. Aquaparks have filled a gap in the market," Katarína Šarafínová, marketing director of Tatralandia, told The Slovak Spectator.

Alena Spišiaková, marketing manager of AquaCity, pointed out that Slovakia has all the conditions - cultural, historical, natural - to successfully create an interesting and varied tourist environment in Central Europe.

"The High Tatras and the huge thermal springs, several thousand years old, in the foothills of the Tatras, are an excellent location for constructing aquaparks which use geothermal energy," Spišiaková said.

Oskar Gaál, executive director of Aquathermal, added that one reason investors are interested in this area is the prospect of saving on energy bills. However, he emphasized that it is not enough just to drill through to a thermal spring.

You have to build good facilities and promote them to attract the general public and tourists.

"Connecting ski resorts and thermal swimming pools is optimal for attracting tourists to Slovakia in winter," he said.

Andrea Zererová, marketing manager from Aulandia Aqua & Spa Paradise told The Slovak Spectator they decided to open a new aquapark in Bratislava as the city is developing dynamically and the capital definitely lacked such a centre.

"Aulandia will be in operation the whole year round. Bratislavans have already shown great interest in Aulandia, just within a few days of initial press releases, " Zererová said.

Existing aquaparks are not afraid of the fact that their number is increasing. On the contrary, they are confident that more competition will lead to an increase in service quality.

"Bratislava and its surroundings would comfortably "feed" two more such facilities with a similar capacity because there are not many places there even for simple swimming," said Gaál from Aquathermal.

The number of visitors to Aquathermal in Senec is growing. There is even the risk that during the high season people will have to wait to get in because the centre can only accommodate so many people at one time.

Gaál added that more competition would give consumers a chance to compare facilities and choose the one best suited to their needs. "As an administrator [of such a facility] I will not be alone in showing the public that it is possible to relax near water for the whole year, and not just in the summer," Gaál explained.

Spišiaková of Aquacity told the Spectator that she welcomes the competition because it makes Slovakia more visible, adds variety to what is on offer and provides options for visitors.

Tatralandia's Šarafínová said: "It is not the correct thing to be afraid of competition. On the contrary, the competition drives us to improve and offer something that they [the competition] do not have." Tatralandia also predicts that visitor numbers will grow.

Investments into this, the oldest and biggest aquapark in Slovakia represented, in the first phase of investment, about Sk100 million (€2.6 million). It has nine pools, six of which are open all year round. The centre has 20 toboggans and slides of which four operate during the whole year. It prides itself on having the longest indoor toboggan run in Slovakia and the Czech Republic - Anakonda - 146 metres long. Rollercoaster, a rafting toboggan, is 85 metres long and is also one of the top attractions. In the centre's Tatra-Therm-Vital complex, there are 16 steam, water and massage baths, plus saunas.

The overall water area of AquaCity covers nearly 3,000 square metres. Over the last three years the Aquapark Poprad company has invested approximately Sk950 million (€24.7 million) in the aquapark. During the first phase the original plan for the swimming pool changed completely. The whole project is based on a geothermal spring, which supplies both the outdoor and indoor pools.

In 2004, the second phase of development started. When the aquapark in Poprad is complete it will cover an area of 12 hectares and include a new aqua centre with toboggans, pools with sea waves, a 400-bed hotel, a sports' centre and other facilities, all to be linked along a 350-metre long colonnade. The costs should run to about Sk2 billion (€50 million).

This aquapark offers visitors nine pools of different sizes and temperatures, the whole year round. There are also various other water attractions, as well as saunas and massage baths.

How do Slovaks spend their holiday? (in %)