"JAPANESE tourists visiting Bratislava are the most regular purchasers of the traditional costumes," Alena Šumšalová of the Centre for Folk Art Production (ÚĽUV) in Bratislava, says. "The dances they learn at workshops make them want to buy the costumes. Folk dance group Lúčnica and SĽUK [the Slovak Folk Art Ensemble] have held such workshops in Japan, through which the locals got to see the costumes." 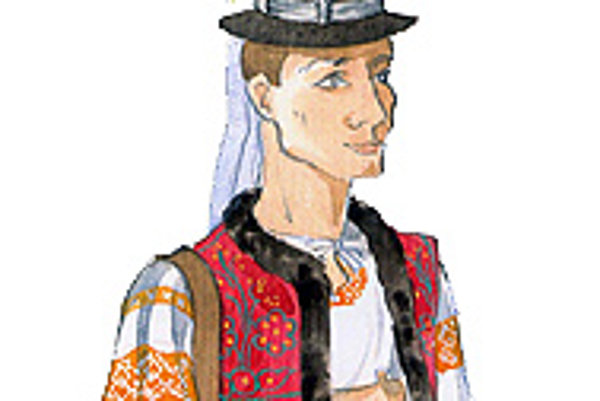 Font size:A-|A+0
"JAPANESE tourists visiting Bratislava are the most regular purchasers of the traditional costumes," Alena Šumšalová of the Centre for Folk Art Production (ÚĽUV) in Bratislava, says. "The dances they learn at workshops make them want to buy the costumes. Folk dance group Lúčnica and SĽUK [the Slovak Folk Art Ensemble] have held such workshops in Japan, through which the locals got to see the costumes."

Folk costumes are no longer ordinary clothing in Slovakia. Their richness and diversity, though, keep on inspiring. Keepers-of-tradition preserve and restore original costumes for display purposes; tailors run them up for folk dancing performances. These costumes also inspire contemporary designers to pull the muse from tried and trusted traditions. And, somewhat amusingly, the tradition crosses cultural borders, even continents.

For Japanese tourists, and those of a similar inclination, a new exhibition, Slovak Folk Costumes: Tradition and Inspiration, prepared by the ÚĽUV Gallery, will provide great rewards. Lasting until the end of October, it offers a broad picture of the country's rich and diverse clothing history, including modern, tradition-inspired designs.

The exhibition displays complete folk costumes from the Slovak National Museum in Martin, and accessories and sketches from the ÚĽUV collection. There are ceremonial clothes that date back to the 19th and early 20th

centuries, classified into western, central and eastern Slovakia sections. Modern clothes inspired by traditional costumes are a special part of the exhibition.

Visitors can see female folk costumes from Chorvátsky Grob and Hrušov, a male folk costume from Krivany, a shirt from Kendice, and a chaplet from Ždiar. They can also admire the most fascinating male Detva costume with a typically short shirt stopping about half way down the chest, wide trousers, three-buckle belt and a small hat.

Before visiting the exhibition, one can get a quick idea of the diversity of Slovakia's folk costume heritage thanks to a virtual map on ÚĽUV's website (www.uluv.sk). You can browse over 60 regions, each identified with a particular costume, with a virtual magnifying glass.

"Geography, climate, historical and technical development, all had an effect on the variety of folk clothing in Slovakia," Šumšalová said.

The clothes worn in poorer, mountainous regions differed from those worn by people in the fertile lowlands. The rural inhabitants made theirs from linen, hemp, wool and fur. With industrialization, better accessibility of fabrics and population migration, the differentiation has only grown wider.

"There were over 60 design regions at the turn of the 20th century," says Alžbeta Gazdíková from the Slovak National Museum in Martin. "They differed in shapes, material and colouring used, but primarily decoration.

Ornamental richness and a large variety of techniques could be found, especially in western and also central Slovakia, around Trnava, Bratislava, Piešťany, Horehronie and Krupina."

It is the decoration that gets most of the attention today. The various embroidery techniques, bobbin lace patterns and shapes can now be found in the works of many Slovak fashion designers, including Lea Fekete, Janka Menkynová and Klára Brunovská.

In addition to Japan, collectors of Slovak costumes can be found in the USA as well. The major ones will come to Bratislava on September 20 when they will take part in the world genealogical conference, and on that occasion visit ÚĽUV's exhibition.