AFTER Slovakia's Constitutional Court accepted a complaint from a citizens' group, which argued that parliament's approval of the EU Constitutional Treaty was against the Slovak Constitution, Slovakia's President Ivan Gašparovič signalled that whatever the court ruling, he does not consider it binding. 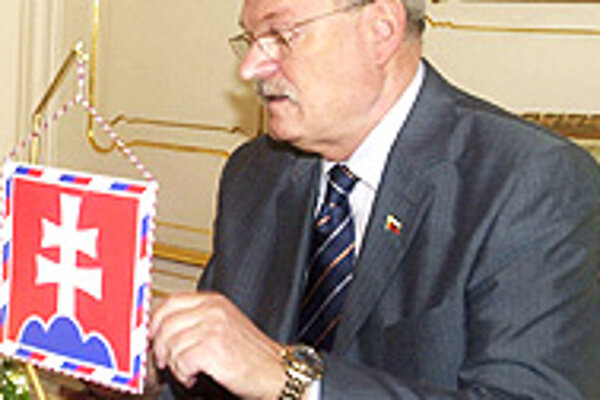 Font size:A-|A+0
AFTER Slovakia's Constitutional Court accepted a complaint from a citizens' group, which argued that parliament's approval of the EU Constitutional Treaty was against the Slovak Constitution, Slovakia's President Ivan Gašparovič signalled that whatever the court ruling, he does not consider it binding.

According to existing legislation, the Slovak president formally approves all laws and documents passed in parliament. Slovak MPs gave their overwhelming approval to the EU Constitutional Treaty, with 116 votes out of a total of 150.

While the president was considering whether to sign the document or not, a group of conservative citizens and Christian Democrat politicians started calling for a referendum on the issue. They argue that by approving the EU Constitutional Treaty, Slovakia is in effect agreeing to join another bond of states. According to the Slovak Constitution, such a move must always be put to the people for approval in a popular vote.

Ondrej Dostál, the head of the Conservative Institute of M R Štefánik, who drafted the motion at the Constitutional Court, said: "Legal opinion is that the EU constitution is an international treaty on Slovakia's entry into a state bond with other states and it requires the passing of a constitutional law and confirmation in a referendum."

According to Dostál, this opinion relies on the following arguments. If the EU constitution took effect, the EU would become a state union that has the components of and fulfils the function of a state.

Slovakia's entry into a state union, continued Dostál, requires approval through a constitutional law, which must be passed by a two-thirds majority of total MPs. This law must further be confirmed in a national referendum.

"If this is true that the parliamentary approval and ratification of the EU Constitutional Treaty without a referendum was not only in conflict with the Slovak Constitution, it also breached the right of citizens to participate directly in the administration of public matters," Dostál told The Slovak Spectator.

Slovakia's Foreign Ministry as well as Prime Minister Mikuláš Dzurinda insisted, however, that the approval of the EU Constitutional Treaty in parliament was legitimate.

In a statement issued on July 15, the Foreign Ministry said that it respected the decision of the Constitutional Court to accept the motion for deliberation and temporarily ban the president from formally ratifying the treaty with his signature.

The ministry's spokesman said, however, that the ministry was convinced that the procedure was in line with the law and that "the EU Constitutional Treaty does not transform the EU into a bond of states".

Despite the problems with approving the document in some EU member states, Slovak Foreign Ministry officials, including Minister Eduard Kukan, think that the ratification process should continue.

PM Dzurinda also insisted that the cabinet and parliament acted in line with the law in approving the EU Constitutional Treaty.

Because of the existing differing opinions, the Constitutional Court, which is Slovakia's ultimate authority in legal disputes, decided on July 14 to accept the citizen group's motion for deliberation.

At the same time, via a resolution, the president now has to wait for the court's decision before he decides on whether to sign it or not.

According to the court's spokesman Štefan Németh, a verdict could be announced by the end of this year.

"When signing a ratification document, the president will decide by himself," said Trubač.

He would not specify, however, whether the president would or would not sign the document, nor when he would announce his decision.