Getting ready for the Big Bang

THE EURO will become legal tender in 2009, replacing the Slovak crown and turning it into history. However, until the crown sinks into oblivion under the rays of the new European currency, the whole country must prepare for its introduction: state institutions and businesses, but also ordinary citizens. 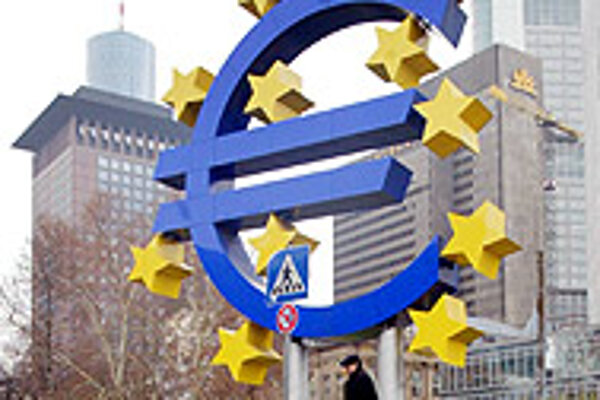 Font size:A-|A+0
THE EURO will become legal tender in 2009, replacing the Slovak crown and turning it into history. However, until the crown sinks into oblivion under the rays of the new European currency, the whole country must prepare for its introduction: state institutions and businesses, but also ordinary citizens.

The euro should not bring any major risks apart from possible price hikes, which, according to the cabinet, may be mainly caused by citizens' expecting them and not by any economically justified reasons.

On July 6, the Slovak government adopted the National Programme for Euro Adoption in the Slovak Republic, which lays out chronologically the steps the country will take to adopting the euro as the official Slovak currency. The Finance Ministry and the National Bank of Slovakia (NBS), as well as other state and private institutions, produced the document.

Cash and cashless euro at once

Unlike the current eurozone countries, Slovakia will introduce the euro in cash and as a cashless system of exchange all at once: the so-called "Big Bang" method.

"The process of euro introduction will be supervized by a National Coordination Committee. The Finance Minister will be the chairman. The NBS will have an important place there as well," NBS spokesman Igor Barát told The Slovak Spectator.

"The committee will consist of six working committees, each responsible for a certain area, such as banking and the financial sector, public administration, the non-financial sector and consumer protection, legislation, communication, and information technologies and statistics," he continued.

Euro introduction will bring one-off costs for citizens, as well as entrepreneurs, mainly for the conversion of crowns into euros, in the area of information systems, cash management, accounting and bookkeeping.

The National Programme emphasizes that euro adoption will not be a reason for any exceptional prices hikes. It admits that in the majority of countries where the euro was introduced as cash, consumers felt that prices significantly increased, but the Programme points out that in reality there were no grounds for this impression.

"In 2002 the euro adoption share of overall price hikes was 0.09 to 0.28 percent, which was only a small part of overall inflation (2.5 percent). However, consumers perceived a much higher rise. It was caused by a coincidence of several unfavourable events that consumers wrongly connected to the euro (a bad harvest and consequent price increases in food, an increase in some taxes as well as price increases because of a lack of competition in some industries)," reads the document.

The programme points out that it will be necessary to make sure that the steps taken towards euro adoption will not be used as excuses to increase prices and to prevent inflationary effects caused by people's expectations.

The dual pricing of goods in Slovak crowns and euros before the actual euro adoption and some time after it will be one of the major tools for consumer protection against unjustified price rises.

The prices will have to be converted exactly according to the official foreign exchange rate. Consumers will thus have time to get used to prices in euros, and they will have an opportunity to compare the prices before and after the adoption.

Slovak institutions will regularly monitor price development in the years 2008 and 2009 and will inform the public about the results. The information campaign on the euro-adoption aimed mainly at consumers and small- and medium-sized enterprises should provide all necessary information regarding euro adoption.

Miroslav Šmál, an analyst with Poštová banka, compared the situation to the EU pre-accession mood in Slovakia. Before EU accession, Slovaks expected price increases in food and real estate but things turned out differently.

"Based on this experience, there is no reason for a pessimistic scenario. The prices will not be converted from one day to another. Shops will be obliged to show the prices in both currencies for quite a long period of time. Buyers will thus be able to easily compare and remember the prices in crowns and euros. At the same time, competition between shops will not enable extreme price hikes," Šmál told The Slovak Spectator.

Zdeno Štefanides, the main analyst from the VÚB bank, agreed that price increases caused solely by euro adoption (for example by rounding-off numbers) were negligible (tenths of one percent) in the European Monetary Union (EMU) countries in the year of adoption.

However, he added that the consumers perceived inflation as several times higher.

He thinks that in Slovakia it will be very much the same and inflation remain low in 2009, the year of euro adoption. However, there is a risk of slight price increases after 2009.

"The growth of inflation due to crown conversion into euros will probably be low in 2009, although it is very probable that consumers will perceive inflation growth as much higher.

In fact, the dichotomy between actual and perceived inflation exists even now, when consumers perceive inflation in two-digit numbers while it is actually much lower.

"In the long-term, after 2009, there is a risk that prices in Slovakia in euros will grow faster than if they were in crowns because of the need for real exchange rate appreciation. However, this impact will probably not be higher than 1 to 1.5 percent," Štefanides explained.

Ján Tóth, analyst with ING Bank, admits it is easier for shops to increase the prices at times when the economy is working at its full capacity, and Slovakia will be in such a situation before its accession into the EMU.

"That is why I think that this effect [price increases] will be a bit stronger in Slovakia than in previous eurozone countries, but it should not exceed 0.5 percent. The growth of inflation caused by the euro in old EMU countries represented 0.1 to 0.3 percent," Tóth said.