NARDO di Cione's table paintings, or the famous Bojnice Altar, are among the jewels of the Bojnice castle museum. They were part of the collection of the castle's last owner, Count Ján František Pálffy. 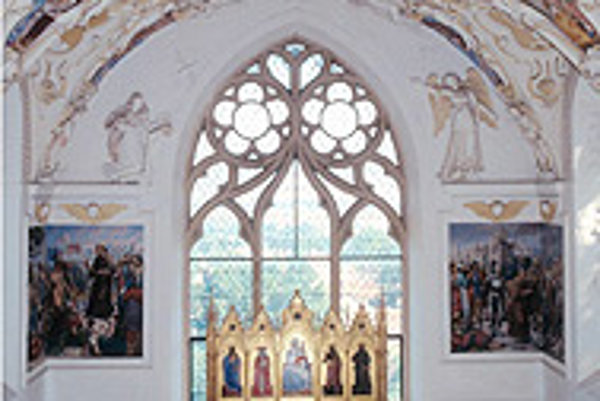 Font size:A-|A+0
NARDO di Cione's table paintings, or the famous Bojnice Altar, are among the jewels of the Bojnice castle museum. They were part of the collection of the castle's last owner, Count Ján František Pálffy.

The altar panels were painted in the 1350s with tempera on wooden boards. The characters depict the Virgin Mary with Jesus surrounded by saints: St Jacob Senior, St Hieronymus, St John the Baptist, and St Ranieri. The characters are not mutually tied into one story.

The Virgin Mary is presented as Madonna Humilitas - the Humble Madonna - the most popular depiction of God's Madonna, a mediator between God and believers, since the middle of the 14th century.

Similarly, the lower dividing row does not feature a scene with a concrete story, but only pairs of saints with their attributes: Augustine and Mary Magdalene, Paul and Katherine, Lucy and Peter, Margaret and Anton the Hermit. Christ the Martyr appears on the central panel between the Virgin Mary and John the Apostle.

Among the saints painted on the altar is St Ranieri, the patron saint of Pisa, Italy. Legend has it that the altar was originally created for a church there. What is known is that the altar was created by special request as evidenced by the decoratively spread robe of the Virgin Mary with ermine fleece and the rich use of a demanding gilting technique.

Nardo di Cione, the creator of the Bojnice altar, was a Florentine painter. His dates are not certain, but he was active between 1343 and 1366. Nardo came from a large artistic family that included his older brother Andrea, who was also known as Orcagna, and who was a well-regarded artist, sculptor, and architect in his own rights. The brothers jointly owned a painting studio, and their work influenced most of the Tuscan painters in the second half of the 14th century.

In 1348, Florence and Siena were devastated by bubonic plague. More than half of the citizens of these two cities died, among them many significant painters, such as Bernardo Daddi, Pietro and Ambrogio Lorenzetti.

Nardo di Cione survived, becoming the main and most important representative of Florentine painting after the plague. The Bojnice altar is his only completely preserved work.

The Bojnice altar was one of the most significant works in the original collections of Count Ján František Pálffy. Following the count's last will, the altar was placed in the castle chapel. Innsbruck firm Gebrüder Colli created the altar retabulum for the paintings.

The altar remained a part of the castle when many other works of art in the count's collection were sold after his death. In the so-called Friendly Agreement from 1923 between the Czechoslovak state and Count Pálffy's heirs, the altar was included among the items that were not available for sale.

The five panels that form the altar's upper row were stolen from the castle's chapel in August 1933. Immediately after the theft, the panels from the lower row were removed and stored in what was then the Bratislava Homeland Museum. A year later, the thieves were identified, the missing panels were retrieved, and the entire work was taken to Prague for restoration.

After 62 years, on December 15, 1995, the complete altar returned to Bojnice castle. It is currently on display in a specially prepared, temperature-controlled room in the castle's five-sided tower. The altar will be returned to the castle's chapel after restoration work is completed on the chapel.