A FIRE broke out in Slovakia's Tatras mountain range on July 30, affecting 230 hectares of land. Locals describe the damaged area as looking "like the moon". 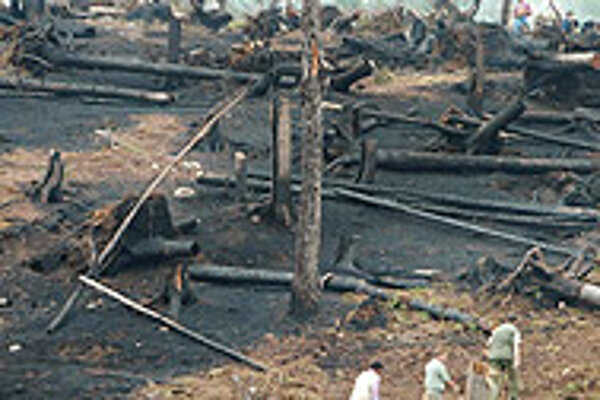 Font size:A-|A+0
A FIRE broke out in Slovakia's Tatras mountain range on July 30, affecting 230 hectares of land. Locals describe the damaged area as looking "like the moon".

The fire is the biggest in the Tatras' recent history. The last big fire hit in 1941.

The forest fire broke out at noon of July 30. However, firefighters were not able to tame the blaze until the following evening, when a rain passed through. Although several small fires still need to be put out, firefighters report that the damaging element is under control. Life in the Tatras can resume.

The fire is not expected to affect tourism, according to Peter Chudý from the High Tatras Tourism Association. The High Tatras generates Sk2 billion (€51.3 million) per year in tourism, including restaurant, lodging and travel services.

Firefighters from Poprad told the press that the fire was reported shortly before noon on July 30. Twelve minutes later, firefighters arrived on the scene with a water cistern and started localizing the fire.

The fire started on the hillside of Slavkovský peak, situated between Tatranská Polianka and Nový Smokovec, within the Tatras National Park. According to park personnel, the fire damaged 97 hectares of land in the third protection range area, 107 in the fourth, and 26 in the fifth. The fifth protection range is the highest protection range in the national park. A new forest spreading on 13 hectares was also destroyed in the fire.

Experts say it will take decades for the forest to renew itself.

While firefighters were busy putting out the blaze, a fiery debate erupted over who was to blame. According to some, the dead wood lying around after a fierce November 2004 windstorm decimated large swathes of Tatras forest, helped fuel the fire.

An August 1 statement issued by Our Tatras Committee, a non-governmental organization said: "The fallen wood on the most frequented areas [in the Tatras] was just left there by forest workers and other groups in charge of processing it."

The NGO says those responsible for processing the wood should carefully evaluate their share of the blame.

"On June 10 we specifically issued warnings about [fire dangers posed by] the gas station near Nový Smokovec, as well as other areas at risk for fire."

Ľubica Trubíniová, a representative of Our Tatras Committee, said that Agriculture Minister Zsolt Simon should look critically at the national park's priorities. Trubíniová suspects that forest workers were leaving highly flammable wood on the ground while hauling away better quality wood, which they could sell for a higher price.

"The extremely flammable but much less lucrative remains of wood were left untouched," Trubíniová said.

Environmental group VLK joined in the criticism, stating that Agriculture Minister Zsolt Simon carries the political responsibility for the fire. The group called on the minister to resign.

VLK insists that the minister has repeatedly ignored the need for fire prevention measures. This year alone, the VLK argues, there have been a total of 12 fires in the Tatras.

Katarína Czajlíková, the ministry's spokesperson, said that calamity wood from the windstorm was being processed in line with an approved anti-fire protection programme. She also said that forest workers had removed wood faster than originally expected, with more than 50 percent of the debris already cleared.

The police must wait to start their investigation into the cause of the fire until firefighters put out the last remains of the fire.

High temperatures across the country in the days preceding the fire, coupled with a large amount of dry calamity wood, made the Tatras a high-risk fire zone.