SLOVAK politicians and top state officials broke a barrier of silence and revealed their assets over the Internet. The disclosures are a true novelty in the country's political culture, but critics warn that the declarations say little about the real wealth of Slovakia's leaders. 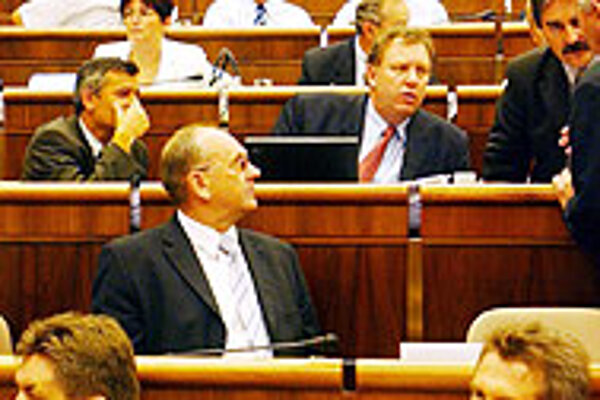 Font size:A-|A+0
SLOVAK politicians and top state officials broke a barrier of silence and revealed their assets over the Internet. The disclosures are a true novelty in the country's political culture, but critics warn that the declarations say little about the real wealth of Slovakia's leaders.

The declarations were published on July 29 in line with a "conflict of interest" law. The public can access a total of 417 declarations by logging on to the Slovak Parliament's website and searching under the parliamentary committee for incompatibility of functions header. The committee reviewed the declarations.

The president, cabinet ministers, deputy ministers, judges and other state officials listed their property on the Web, in addition to Slovakia's MPs.

The declarations include the officials' 2004 incomes along with non-state-related employment, other business activities, and functions they have as part of their state posts.

The declarations also list the officials' real estate property as well as movable assets, such as savings, stocks, cars or precious objects including jewellery or works of art.

Finally, the declarations indicate whether the officials have any debts, including loans.

Although some declarations contain detailed descriptions of real estate or other immovable objects, the value of these assets is not included, nor is the amount of loans or other debts.

The declarations also fail to state when the officials acquired their property and losses, leaving room for critics to grumble.

Slovak officials were compelled by law to list only that property which exceeds 35 times the minimum wage, or assets of more than Sk230,000 (€5,912).

"The declarations have very little value. Based on these, it will not be possible to control the growth of property at all," Zuzana Wienk told The Slovak Spectator August 1. Wienk is the head of the watchdog group Fair Play Alliance.

The sole figures included in the declarations are 2004 income levels. The MP making the best living, according to the declarations, is independent MP Miroslav Abelovský, who earned Sk3.6 million (€92,500) last year. A Slovak MP's state salary comes to just Sk.5 million (€12,850).

Apart from being an MP, Abelovský is an active lawyer with his own legal practice.

President Ivan Gašparovič declared his 2004 income as Sk1.3 million (€34,000). According to the declaration, the Slovak president owns a family house, a recreational cottage, a garage, a three-room flat, building plots, two cars, various works of art and some stocks.

Speaker of Parliament Pavol Hrušovský earned Sk697,000 (€17,900) last year. Slovak PM Mikuláš Dzurinda earned SK1 million (€25,700). Dzurinda declared ownership of a flat in a block of flats, a cottage, five plots of farming land, a car, an attic flat and an unspecified amount of savings in Slovak and foreign currency. The PM received a mortgage loan to finance the attic flat.

The prime minister's brother Miroslav Dzurinda, a member of the Board of Directors of the state-owned railway company Železničná spoločnosť, failed to submit his declaration.

Officials' spouses and their children under 18 also had to submit declarations to the committee. These, however, are not publicly available on the Internet. Neither are the property declarations of municipal officials, such as mayors and municipal MPs, and top representatives of the municipal and regional authorities.

Municipalities have fought hard against having to publish their data on the Internet. Parliament failed to push through the legislation that would have required it.

Critics think there is a lot that needs changing in the disclosure law. They want property declarations to give the public a better idea of how their top representatives are doing financially, and what these officials do to finance their lifestyles.

"The forms that the control committee [the committee for the incompatibility of functions] approved for the execution of this law will have to be changed so that it is clear what is the character and value of the property. We also think that the duties of the functionaries should be enlarged, for instance, by having to publish their stakes in companies that are lower than the 35-times the minimal wage. At the moment, a public official can have a stake in a very successful limited liability company but is not required to list it in his or her property declaration," said Wienk from the Fair Play Alliance.

The head of the parliamentary committee for the incompatibility of functions, Smer MP Igor Federič, says that next year, the public should see more exact figures.

"I will propose that officials state the year, price and means of acquiring their property," Federič told the daily Pravda.

Wienk is sceptical that parliament would allow such changes. "The likelihood of changes taking place is very much equal to zero," said Wienk.

A two-thirds majority is needed to push through changes to the law, since it is considered a constitutional law.