HOT summer days tend to pull politicians out of their offices, but those at the Culture Ministry are an exception. The government office is a hive of activity, the buzz caused by a recent change at the very top. 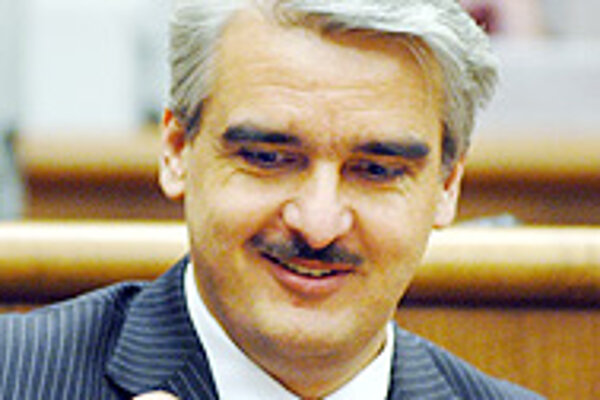 Font size:A-|A+0
HOT summer days tend to pull politicians out of their offices, but those at the Culture Ministry are an exception. The government office is a hive of activity, the buzz caused by a recent change at the very top.

František Tóth, a member of the ruling New Citizen's Alliance, replaced his predecessor, literary historian Rudolf Chmel, as Culture Minister on June 15, 2005. Chmel, also an ANO affiliate, was criticized for ineffective handling of his ministerial responsibilities.

Chmel's younger party fellow, the 42-year-old Tóth, hit the ground running. Just five days after taking up his post, he came up with a solution to the long running problem of how to finance operations at the new Slovak National Theatre building.

To reach a satisfactory outcome on this issue is the minister's number one priority. Others include changing the arts grant system and providing more funding for Slovak film productions.

The minister agreed to an interview with The Slovak Spectator, casting aside the traditional "100 days grace period" usually reserved by ministers before talking to the press about a new post.

The Slovak Spectator (TSS): You have been Culture Minister for a month. You have researched the current state of affairs, visited several cultural institutions and collected information. What are your findings?

František Tóth (FT): One thing I found is that the grant system was not working. When I showed up for work, I found more than Sk90 million (€2.3 million) in funds waiting to be distributed and more than 600 contracts for 2004 just sitting there, waiting to be dealt with. My first step was to adopt certain organizational changes. I even threatened employees that their bonuses would be withdrawn if the backlog did not get cleared. The result was that we administered all 2004 contracts within two weeks.

The other thing I found is that the ministry's management of cultural organizations is stronger than I thought. This gives organizations little freedom and flexibility, which many mentioned in their annual reports. We decided to implement measures that would sever this "umbilical cord" as much as possible. The ministry will give organizations freedom to plan. Actually, we will push them to make their own project plans. We will supply them with a certain financial perspective, not for one but for three years, so that they can plan further in the future. If nothing terrible happens, if they fulfil their obligations, then we will guarantee them money for three years in advance. We want to create rules that encourage sovereignty, independence and responsibility.

TSS: What exactly will you change within the grant system for 2005?

FT:I want finances that leave the ministry's accounts to be more focused on the consumer of culture - I mean the viewer, the listener, the visitor of exhibitions. We want state-sponsored books to be read by people, for example. To ensure this, we are requiring grant receivers to document the effectiveness of their spending.

TSS: I want to hang onto the word "effectiveness" for a minute. The media reported that you wanted to shut down certain cultural institutions because they were not effective. How can one evaluate the National Gallery or the Philharmonic in terms of effectiveness?

FT: I saw a cartoon in the SME daily. It was a drawing of me holding a calculator, tallying up the strings on a violin and harp. The punch line was that I decided it was more effective to play violin than harp because the violin only has four strings. The thing is, I never said I wanted to close down the National Gallery. That was media disinformation. I only wanted to adopt certain measures.

If we talk about effectiveness, I don't just mean a financial outcome in the sense of turning a profit. I understand effectiveness as something that involves the consumers of culture. Did anyone read the book? Go to the concert? In other words, effectiveness should be measured in the number of readers, not revenues. I'm happy when our exhibition hall is full, when a provocative designer [Stefan Sagmeister] draws visitors.

Culture will never be profitable. It will always depend on state assistance. But state-sponsored culture has to offer something to the end user. If we pay to publish the book and the book ends up collecting dust on a shelf, then the project was not effective, at least not from the reader's perspective.

TSS: Your predecessor said that a "nation without national institutions can't be called 'cultural' or a 'nation'". What do you make of this?

FT: Concerning national institutions, each has a specific task. For example, galleries rescue art collections, do restorations, and perform scientific research as well as exhibit artwork. Thus state support should follow a similar structure. How well is the gallery fulfilling its obligations? That is what will be evaluated.

TSS: After the revolution, the focus was on restructuring politics and the economy. Culture was pushed to the periphery. How much of a crisis is culture in?

FT: My predecessor liked using this word [crisis]. However, he understood it in a wider context. He saw the crisis in what people were interested in, what they wanted to watch and hear.

According to him, people are bored by theatre. They want to see scandals on the front pages of the newspaper - who slept with whom. They want to watch shallow cultural programmes on TV. This trend gets mirrored in what's on offer and what cultural institutions produce.

I don't consider this a crisis. I see it as a pendulum. Today, the focus might be on tabloid scandals. But I believe that in few years, the focus will swing back. I don't think a cultural revolution is needed.

TSS: What about those who fall into the minority - those who still like the theatre, for example?

FT: I feel the Culture Ministry has a duty to offer an alternative to people, and our cultural institutions do so. But the choice is up to the people. We can't tie them and pull them into the theatre. We have to come up with ways to draw them back voluntarily.

TSS: Few politicians have shown interest in fronting the Culture Ministry. It seems the least lucrative post. Do you think that it will eventually merge with the Education Ministry?

FT: The decentralization of state authorities is creating pressure to merge ministries. In the last few years, the state has given away a lot of its direct responsibility for education, culture, healthcare and municipalities. It does not make much sense to keep the original apparatus as it is in above-mentioned ministries.

Ministries should issue guidelines. The everyday running of institutions should be the responsibility of towns, villages and regional governments. I think ministries should be reduced to conceptual institutions that will focus on goals, concepts and visions for the sector. It won't try to manage a museum in Humenné from a Bratislava office.

TSS: Your solution for the Slovak National Theatre building, which has been in purgatory for years, is to create a management company in charge of renting out available space. This idea is being well received by theatre administrators as well as artists and actors. To what extent does this solution create a bridge between business and culture?

FT: I analyzed all the ideas [for solving the SND problem] that came to the ministry. I chose common points and answered all the questions that my predecessors left unanswered. I tried to find solutions that would suit all parties.

Everyone wanted the SND project to be successful. Some just believed that a private owner would fulfil the task better than the state ever could. On the other hand, it was clear that many people could not imagine a national theatre functioning in a privately owned space. I tried to compromise, proposing that the building remain in state hands but including a business incentive to keep the building used as effectively as possible. The solution revolves around effectiveness - not from a money point of view but from a usage point of view.

FT: My handicap is that I have to build my authority every day, compared to Chmel's authority that was present from the first day and still remains. Of course, it is possible that in some areas I will never gain this authority. However, I will try and will do all that I can to change this.

My advantage is that I can translate the language of economics into a cultural one. Maybe because of this I'll be able to acquire more finances for the

cultural sector. I never perceived that Finance Minister Mikloš would refuse to give money to the Culture Ministry. I always understood his reluctance as the result of never receiving any feedback on how the money was used.

TSS: What are your plans to present Slovak culture abroad? And how would you import foreign culture into the country?

FT: We support the export of Slovak culture and art through grants and other institutions. The Economy Ministry, Foreign Ministry and the Culture Ministry are talking about coordinating more closely in order to ensure better transparency. As for supporting the import of foreign culture, I don't have any information on that. The Culture Ministry concentrates on supporting the creation and export of domestic artwork.

TSS: You want to support the production of Slovak films. Why?

FT: I have followed this issue closely. It is clear to me that viewers want to see Slovak actors on TV as well as in the cinema. This is what people want and need in order to build national confidence and pride. Slovak actors can much better describe a Slovak mentality than anybody else. We can draw on our experience from past, allowing Slovak viewers to identify with the roles portrayed. Hollywood films are entertaining, but can Slovak viewers identify with them?

We must not let this sector totally die out. We have a [film] tradition from The former Czechoslovakia, one that is viewed in a very positive light by the Slovak public.

TSS: To what extent can a culture minister influence Slovaks' relationship towards culture as a whole?

FT: The culture minister can change people's view of culture by changing culture to profit individuals. This way, culture will get closer to people and people will start to view it in a positive light. In turn, people would start placing more value and emphasis on cultural life and expect the government to do the same. It would be great if we could start this whole process off.