IS CORPORATE responsibility just a trendy way of increasing visibility? When firms donated generously to efforts to clean up the High Tatras after a violent windstorm devastated the region last year, were they acting out of concern for the community, or were they simply banking on positive publicity? Cynics say the latter, but big companies argue that publicity alone is not the main reason they are becoming socially responsible. 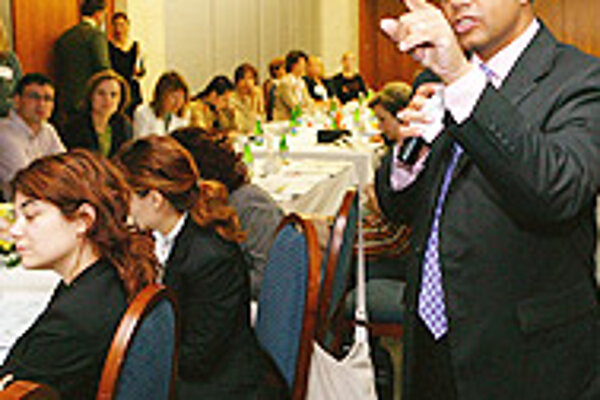 Font size:A-|A+0
IS CORPORATE responsibility just a trendy way of increasing visibility? When firms donated generously to efforts to clean up the High Tatras after a violent windstorm devastated the region last year, were they acting out of concern for the community, or were they simply banking on positive publicity? Cynics say the latter, but big companies argue that publicity alone is not the main reason they are becoming socially responsible.

While companies admit that behaving responsibly can help strengthen their corporate brand, they also say that most of their good deeds go unnoticed. Corporate responsibility is not a PR tool but a mark of a company's maturity - and its ability to succeed in today's marketplace.

Business Leaders Forum (BLF), an association established just last year, is the first to promote corporate social responsibility (CSR) in Slovakia. Its goal is to help members put socially responsible agendas into practice for the benefit of corporations and communities alike.

The bulk of BLF membership is made up of local or regional branches of international companies. The association provides a forum for mother companies to transfer their CSR know-how to their Slovak entities.

One BLF member is Orange Slovensko. The company's media manager, Peter Tóth, told The Slovak Spectator that membership in the new Slovak association has helped his team gain access to globally accepted practices. "Thanks to BLF we can learn from companies that have gone before, as well as become an inspiration to other BLF members. We assume that BLF will implement corporate social responsibility as a business standard in Slovakia," Tóth said.

He described CSR as a "systematic approach to business that, apart from the company's business interests, also takes the needs of stakeholders into consideration". According to Tóth, "CSR also looks at [measures] a company's efficiency and reports on the results."

Why play the game?

When asked why BLF membership and corporate social responsibility is important, most local firms responded that CSR is something today's companies must do to stay healthy.

Slovak Telecom considers CSR one of the basic attributes of a modern firm. Company spokesperson Radoslav Bielka told the Spectator: "There are well respected European documents that clearly state that behaving responsibly is no longer a luxury but an expression of a company's maturity. Moreover, they state that CSR is an inevitable standard for international acceptance. We feel Slovak Telecom has a responsibility not only to provide quality products but also improve the quality of life in the community in which we operate."

As a company with a dominant market share in the technology industry, Microsoft for the Czech and Slovak Republics feels it must set an example for other companies. "We have a great responsibility not only to our customers but also to the whole of society. We thus support social programmes, such as those that provide IT skills to underserved groups, which in turn helps those people integrate into everyday working life," said Jiří Grund, Microsoft's regional spokesperson.

Juraj Droba, director of corporate affairs at T-Mobile, says his company's involvement with BLF was a natural choice: "There was no question of joining [the association]. As a strong international company, we strive to be a leader in corporate responsibility. Our understanding of CSR focuses on the following key areas: our relationship to the community in which we conduct business; our impact on the environment; and our accountability across the board."

Not just a PR tool

Grund of Microsoft wonders why it is so bad if a company wants to make its social programmes more visible. "If you decide to be a long-term sponsor for a hockey team, for example, the marketing communication is direct, and all the sides are content. But if you want to publicize the fact that you've contributed Sk10 million (€256 million) to an orphanage, is that bad?"

Tóth from Orange puts it this way: "Our company is pleased if the public notices our CSR efforts, since that visibility can contribute to building our reputation. On the other hand, staying committed to socially responsible principles requires a big investment and a certain level of risk. A firm opens itself up to the public when it subscribes to CSR. CSR reports sometimes contain more information than the company's annual report," he said.

The media can help

Some media representatives complain that corporations are so focussed on promoting a positive image that few are willing to comment on critical issues posed by journalists that may put the company in a bad light. According to BLF members, part of being socially responsible is being prepared to comment on the hard questions. However, some still want the media to cover corporations' CSR activities in addition to the negative news.

"Media have their own agenda. It should come as no surprise to anyone that they [the media] are less likely to report on events that they consider 'not newsworthy'," said Droba of T-Mobile.

Grund of Microsoft agrees that responsible companies should respond to journalist queries. "However, I do not see the reason for bargaining [one good news piece for one bad news piece]. I am confident that there are always ways to inform the public about a good thing. Being active in this endeavour brings better results than just complaining about media," Grund added.

Tóth from Orange told the Spectator that media's role should be to create a demand for responsible business by reporting on good and bad examples. Media should "not just deliberately look for negative information, although it is mainly this what sells the paper".

Tóth continued: "In Slovakia, we are at the beginning of the development of CSR. It is natural that companies engaged in CSR want to get the word out. Understandably, media perceive this as forcing them to print only positive articles."

Most BLF members agree that the media can be a partner in promoting corporate responsibility. "There are many interesting and good projects whose success depends on publicity. These projects sometimes fail due to lack of media interest," said Tóth.

Bielka from Slovak Telecom agrees that the media could play a helping hand in promoting corporate responsibility. "Bigger publicity would, for sure, encourage more business entities to consider whether they should move part of the budget earmarked for advertising to more useful projects that benefit people in the community," he concluded.

The Business Leaders Forum (BLF) is an informal association of companies established in April 2004. The groups charter is to promote the principles of corporate social responsibility in Slovakia.
CSR platforms have existed in other European countries for decades. Such forums are associated with international organizations like CSR Europe. BLF Slovakia is a new partner for international institutions in the European and transatlantic dialogue on corporate social responsibility. Founding members of BLF Slovakia are: