The rebirth of the Slovak fashion scene 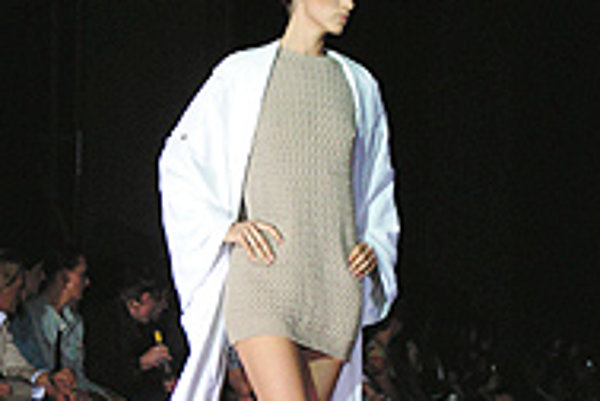 At the beginning of June, Křiváková presented her collection along with her international schoolmates. The annual Angewandte (Applied) Show, which is the fashion department's final presentation, catches the interest of the world's top fashion experts, gallery directors and media, such as The New York Times, Vogue and Harpers Bazaar. Visiting Belgian professor, creative designer Raf Simons, led this year's show.

"I've just finished a school that is very demanding on [one's] time as well as finances," said Křiváková, whose

work appears under the Kristy Krivak label. Her designs are defined by a combination of quality materials with

an inventive line and a female undertone that brings the poetry and energy women radiate to life.

Until now Křiváková has been busy studying, with some of her designs appearing for sale. So what is next?

"I'm thinking of working in one of large fashion houses like Balenciaga, the Hussein Chalayan, Gucci or Burberry to start with and see how that works out in practice. Then I will decide whether I want to continue a career with a firm or start my own label," says Křiváková, who works with energy, enthusiasm and a healthy self-confidence and optimism.

On July 18, she was chosen to receive an Austrian state award, a stipend of €1,500 per month for one year to help her launch her career. She also got an offer to show her collection at the Austrian Fashion Week in

September. The young designer has no plans to return to Slovakia. After experiencing what once used to be the "prohibited West", she sees her East European homeland with a critical eye.

"The quality of our [Slovak] fashion scene is grievous. In addition, I was often astonished with the support my [Vienna] schoolmates received from their states. I, paradoxically, got support only from Austrian organizations. I think that says it all."

The support for studying fashion in Slovakia is zero. But Křiváková is proof that money does not stop young talent from rising to the top - whether abroad or at home. Thanks to such individuals, Slovak fashion has a voice in the world.

"There have not been many designers who have managed to establish themselves abroad. Those who did are

exceptions," says Zuzana Veselá, assistant in the Fashion Design Studio of the Academy of Fine Arts and Design in Bratislava, the only such university in the country.

Most of these "exceptions" found work in Germany. A few assisted at Forum Tailoring in Las Vegas and others got experience working for a London wedding salon. The world is also learning about the up-and-coming Slovak talent through competitions the students attend. Lukáš Kimlička scored in the Czech town of Brno, Andrea

Kvasnicová won the Hennesy Award in Prague, and Šárka Novotná, a Czech by origin, saw success in China this

year. The Bratislava's academy assistant Veselá, also Czech, was nominated to compete for the international Mittelmoda fashion award in Italy.

Those who really want to triumph across the border, Veselá believes, should leave the country right after high school and graduate from universities abroad. If they stay, they are likely to find only minor opportunities to apply their creativity.

"Local sales people would not take their designs into their shops, a promotion practice quite common in the neighbouring Czech Republic. In addition, the market is too small to retain "high" designers," Veselá said.

A few such successes, nurtured on local ground, are Jana Kuzmová and Ľudmila Bolešová. The first brings her talent out through a highly personal approach at fashion designer atelier Vogel couture in Bratislava. The second, a chief designer for Slovak-brand Lifeline, "feeds" the commercial production at home and reaches out to the Czech Republic, Saudi Arabia and Ukraine.

The Communist regime broke the continuity in fashion development in this country for over 40 years. It took off again only in 1989 with the fall of the regime, but it has not yet fully recovered. One reason is the inability of

those active on the scene to organize.

"In Slovakia, the way it currently works is that for young people to break through, they have to leave. The local environment does not offer them the opportunities the outside world does. But there is a lot of talent and interesting ideas here that could provide a strong basis for the Slovak fashion scene," the activists behind Fashion WoW stated.

Slovak fashion has not yet made any significant breakthrough in the West. Fashion WoW activists think that its quality, which goes hand in hand with quantity, is definitely comparable with other countries in the region.

through," WoW informs, singling out Bulgarian Petar Petrov and successes from the Czech scene.

Vogel couture's designer Kuzmová, who won an Italian Mittelmoda prize in 1995, agrees. The isolation of the Slovak scene during Communism means that Slovakia is at least 10 years behind the West.

"When it comes to competition, though, I think we are absolutely effective," she says.

Kuzmová thinks that there is a perception of Eastern Europe as "exotic". After Communism fell, the first decade served as a getting-to-know-you period for East and West.

"Westerners seem to be tired of themselves, as they know each other too well. Just as that is happening we arrive with our fresh ideas, which to them appear new, exotic and therefore sought after. Proof of that is the various

associations in the West which have the job of mapping fashion development in Eastern Europe," Kuzmová says.

The different fashion approaches reflect the development the two blocs went through, the conditions in which they grew up and what they learned during that time. "Because of the isolation, there was that silent desire to break out. There was something more sensitive, poetic in the work [of Eastern designers]," Kuzmová thinks.

Catching up with the West

Kuzmová's style takes account of the need for practical clothes and the wishes of individual customers. She has to keep in mind that her dream images, which she can let loose in special fashion shows, are not always suitable.

"Moreover, customers don't like it when the designer's style is too obvious, when it is immediately recognizable where the clothes come from. Customers want something unique, different," says Kuzmová, whose varied style can still be identified in the specific cut of her jackets.

Kuzmová, who had to undergo tough competition to become Vogel's sole designer (she is purely responsible for

creativity, not the business side of things), does not approve of the ongoing tradition of a designer opening her/his own boutique.

"It's not a good combination, as few creative artists are at the same time good businesspeople, and this harms the creativity, " she says.

The young designer also contemplated leaving Slovakia, but to her it seemed too easy. "I know many other artists who feel similarly, but they live here, scraping through and trying to somehow stir up some activity. If everybody left, we could 'close' it here."

Fashion is one of the many fields in the post-communist countries where one has to fight hard to find a decent position in one's field of study. Many creative minds leave the country, or switch to completely different fields to what they studied.

WoW explained: "Society is not used to investing in the fashion creations of its local designers. Few manage to survive on their creativeness at home, so they leave."

Despite that, WoW thinks it is only a matter of time before society recognizes Slovak designers potential and they, in turn, appear on the international scene.

A DETERMINED fashion statement is often more important in the work of a fashion designer than the product itself. However, this does not necessarily translate into what customers want.

Some still hunt for clothes clearly defined by brand. But for others, the source of their inspiration is uniqueness. In the fashion of today, over-creativeness has no borders, and everyone can find their personal style.

"There's an absolute freedom in fashion, which should express the personality and uniqueness of the one who wears it, though always subjected to a refined sense for aesthetic feeling," said Kristína Křiváková.

According to WoW Fashion: "It seems that the only philosophy in modern fashion design is the lack of any philosophy. Fashion has dispersed into its most variable forms that exist in parallel next to each other. What interests some, might be completely alien to others."