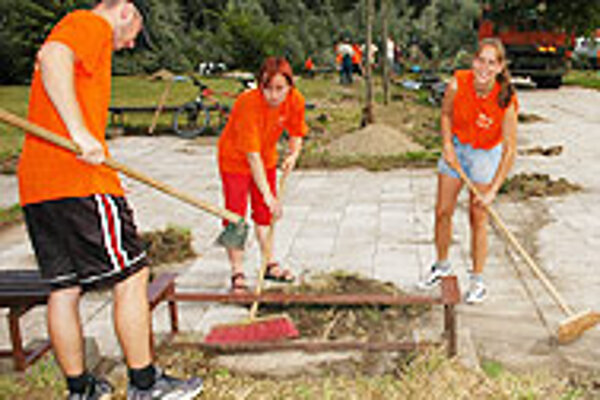 This year, "green teams" revitalized three districts: Petržalka, Lamač and Ružinov. The districts were selected by city residents in a popular vote held between April 13 and June 20.

Topping the ballot was Ružinov with 970 votes out of 3,666. Petržalka, known as the "concrete jungle" to locals because of its high density of concrete blocks of flats, got second with 762 votes. Lamač earned 384 votes for third.

Green teams, composed of a core of students and a handful of citizen volunteers, went out on three subsequent July weekends, planting, collecting waste and building new benches in designated housing estates, parks and open areas. The last clean up effort took place July 30 in Ružinov.

City Mayor Andrej Ďurkovský expressed pleasure at the outcome of Green City 2005. He considers it a model for environmental projects, particularly because of the cooperation shown between the private and public sectors.

Green City started in 1999 as an initiative between Bratislava's Old Town and Philip Morris Slovakia. The event has expanded over the years, growing from a city centre-based project to a citywide one.

"Green City 2005 went to those areas where people wanted it the most - in Petržalka's Šustekova Street, in the [housing block] on Záhradnícka Street in Ružinov and in Lamač," Mayor Ďurkovský told The Slovak Spectator.

"Green City once again showed that cooperation between the public and private sectors with some initiative from citizens is the best way to take care of our environment," he said.

The popularity of the project, says city spokesperson Milan Vajda, is borne out by the fact that more people participate in the municipal voting every year.

"Because the project takes place in summer, participation depends on whether people are at home or on holiday," the spokesperson said.

This year, about 40 citizens, most of them from Petržalka, joined students from the Green City team.

Vajda said the municipality would continue to come up with ideas that encourage civic participation. "We want Green City to expand to all parts of Bratislava as well," he concluded.