Martin gears up for a double header

MARTIN's Slovak National Museum is putting on a display of classic motorcycles dating from 1920 to 1970 through the end of August. 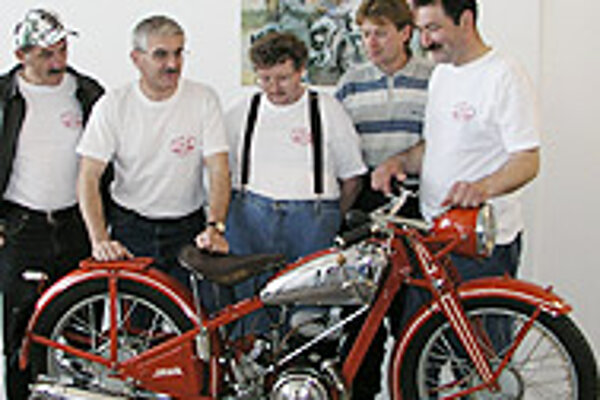 MARTIN's Slovak National Museum is putting on a display of classic motorcycles dating from 1920 to 1970 through the end of August.

Members of the Jawa Club Martin prepared the exhibition, lending their own, mostly still-functioning machines for the purpose. The collection shows historical motorcycles manufactured in the former Czechoslovakia that were considered among the best in the world at the time. A still roaring Jawa 175 Standard with Villiers engine from 1932 is the rarest piece at the show. A three-wheel Velorex, from 1964, originally designed for invalids, also captures the visitor's attention.

Those in the know will certainly be impressed by the authenticity of Boris Mazal's reconstruction of a Jawa 175 Special, produced in 1938. The members of Martin's Jawa Club reconstruct historical motorcycles only with original or repaired parts, which raises the value of these much-desired collector's pieces.

Most club members are former soldiers, so along with motorcycles they also collect military items. And being fun-lovers at heart, they often put on historical army uniforms to re-enact battles and illustrate life in army camps for visiting children.

THE JAMBOR goldsmith's in Martin has a unique place in Slovak jewellery circles because it uses centuries-old methods.

After 12 years of working together, Jana and Eugen Jambors registered international patents of jewellery technology similar to that used in Great Moravian times.

"Great Moravia has always been a great challenge for us," Eugen Jambor says.

Jambor met his wife while studying at the School of Applied Arts in Kremnica. He studied artistic metal casting, while his wife, one year younger, studied to be a goldsmith. It was at that time that they discovered their interest in old-style jewellery.

The Great Moravian jewellery makers used very difficult techniques, from granulation and cladding to enamel paint and gem placing. The Jambors are mainly interested in the granulation method. Experts recognize that it is an especially demanding way of making jewellery. The jeweller uses many gold or silver granules and forms them into various decorative patterns. The Jambors' patent on the technology includes a way of applying the granulating process without using glue, a method used some one thousand years ago.

The results are jewels that do not copy those from Great Moravia, but which take inspiration from the period. One can buy them in several goldsmiths' shops in Slovakia owned by the couple, or see them at exhibitions.