A FINANCIAL matter involving Economy Minister Pavol Rusko has escalated into a full-blown coalition crisis that is threatening cabinet stability. The issue started when Slovak tabloid Plus 7 dní published copies of bills of exchange that Rusko signed pledging money to a now-deceased businessman. 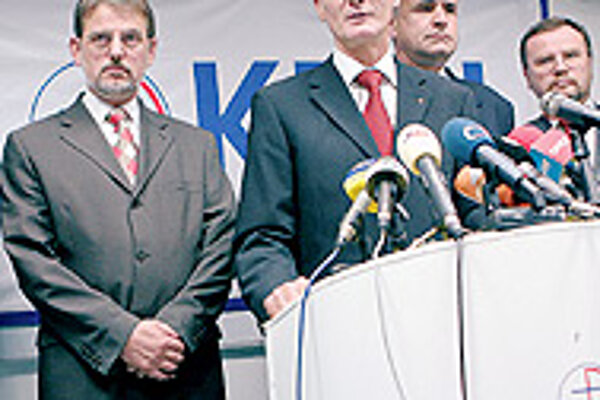 Font size:A-|A+0
A FINANCIAL matter involving Economy Minister Pavol Rusko has escalated into a full-blown coalition crisis that is threatening cabinet stability. The issue started when Slovak tabloid Plus 7 dní published copies of bills of exchange that Rusko signed pledging money to a now-deceased businessman.

Following an August 16 party meeting, the ruling Christian Democratic Movement (KDH) presented Prime Minister Mikuláš Dzurinda with a demand to sack Rusko, who has failed to explain why he signed the bills of exchange and how he paid for them.

"We consider it unacceptable that a person [Rusko] with such unanswered property and financial issues would remain a member of the Slovak cabinet," said KDH Chairman Pavol Hrušovský.

Hrušovský told a press conference that "the cabinet would not continue in its current form" if Dzurinda failed to present the president with the KDH's demand.

Since the Plus 7 dní story first broke, the Slovak media has discovered that Rusko signed Sk104.5 million (€2.6 million) worth of bills to Ľubomír Blaško. When alive, Blaško was active in the energy sector.

The media reports suggest that Rusko signed the bills of exchange after he was economy minister. Consequently, the public and politicians alike are questioning the transparency and objectivity of the minister's actions.

Rusko contributed to speculations of misconduct by not only failing to adequately explain the affair but also presenting several different versions of his story.

Initially Rusko said that he signed the bills of exchange to procure money to buy out a shareholder of TV Markíza, which he co-founded. He then said he guaranteed the loans on behalf of unnamed companies that are close to the minister. Finally, Rusko explained that part of the money was used to finance a project with Blaško. The project, which the minister did not specify, allegedly failed.

Rusko insists that the bills of exchange are related to his activities as a private person, not as a minister or political figure.

The minister told the press that he has since paid off the debts resulting from the bills of exchange. How Rusko paid the bills is unclear, since his ministerial wages would certainly not cover the millions of crowns owed.

Rusko, a chairman of the ruling New Citizen's Alliance (ANO), is a former businessman. He claims he has money from various past business activities, including the sale of his stake in TV Markíza.

"The ANO considers the attempt by the KDH to remove Economy Minister Pavol Rusko to be a misuse of the power ministries for political purposes and perceives it as a serious problem. The consequences will be drawn after a meeting of the ANO's board of chairmen [on August 22]," reads the statement.

It continues: "In the interest of transparency, Pavol Rusko will explain the whole transaction in detail to the ruling partners at a meeting of the Coalition Board."

Prime Minister Dzurinda did not comment on the latest developments. It is expected that the issue will be discussed at an August 23 coalition meeting.

The SMK chairman told the TASR news agency that it was Rusko's "last chance" to explain himself.

Shortly before the KDH presented its demand for Rusko's removal, ANO member Beáta Brestenská told The Slovak Spectator that she believes in Rusko. According to her, the issue is being used as a political weapon against the ANO as part of its pre-election campaign [for the upcoming regional elections], as well as for the national elections in 2006.

"For me, [the bills issue] is in order. I respect Rusko as a trustworthy manager and the bills as his private affair. For me his explanation is sufficient," Brestenská said.

Political analyst Grigorij Mesežnikov, the head of the Institute for Public Affairs, a Bratislava think tank, guesses that the prime minister will try to calm down what has become a somewhat dramatic situation for the ruling coalition.

"If the PM really proposes Rusko's recall [to the Slovak president], he will certainly make sure that the proposal is backed by clear arguments. For Dzurinda, however, it would be best if the case was settled without dramatic consequences," he said.

Despite the KDH's threats that the government would "no longer function in its current form" if Dzurinda does not propose Rusko's recall, analysts doubt whether the KDH's potential departure would result in early elections. They also doubt whether the KDH would actually leave the ruling coalition, should Rusko remain as economy minister.

On August 16, political analyst Miroslav Kusý told the TASR news agency that the KDH is famous for voicing "strong words" that do not result in action. "No one can tell whether [the KDH] means it or not," Kusý said.

Mesežnikov agreed. For him, the possibility of early elections is "marginal" because it is relatively close - one year - until regular parliamentary elections anyway.

"The time for early elections has run out. For technical reasons alone, organizing them would be unwise. Timing is everything and regular elections are around the corner anyway," Mesežnikov said.

The analyst thinks that if the KDH leaves the coalition, or if the ANO leaves with Rusko, the remaining coalition parties would probably try to forge agreements with independent and opposition MPs to support the minority government.

"The Movement for a Democratic Slovakia comes to mind," said Mesežnikov.